Bon Jovi, Bill Belichick and the need to reach out and touch someone. 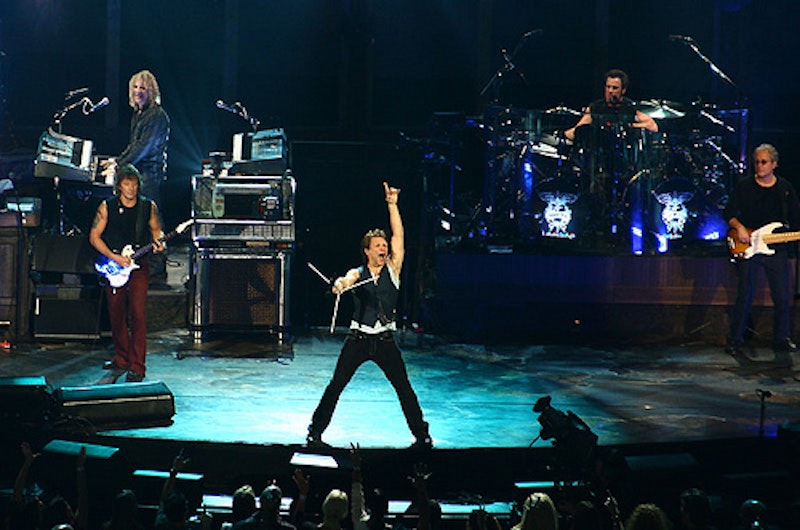 I relish the four hours every Sunday afternoon I get to watch the New England Patriots, the team to beat for the better part of the decade. I suppose the Patriots appeal to me because I grew up in the Commonwealth, or because Tom Brady is the single most charismatic athlete on the the planet, or because Wes Welker gets me all nostalgic about my own days on the field.

However, the on-field appeal of the offensive juggernaut of Brady to Welker is not the only reason the Patriots hooked me. I am more attentive to how Head Coach Bill Belichick acts in the interest of his own legacy and how this response will ultimately effect it.

Last Sunday, against the Indianapolis Colts, Belichick made a call that puzzled pretty much everyone. Winning by six and facing fourth down and two yards to go on his own 24-yard line with just about two minutes left in the game, against the league's most potent offense, Belichick went for it. Conventional, conservative, old-school football says punt the ball and force the Colts to drive 70 yards to win. Advanced statistical analysis actually favors Belichick's call, claiming that going for the first down provided greater odds of victory. Belichick himself said he was trying to put his team in the best position to win, but he sounded and looked disingenuous probably because he was. In that moment, Belichick did not see the best opportunity to prevail or home-field advantage in the balance as much as he saw his an opportunity to secure his own legend. The criticism of Belichick's call exhaustively focuses on his hubris and the perception that he is an egotistical maniac, but the only person that can really understand that call is not Trent Dilfer or Tom Brady or Peyton Mannning.

It is his friend Bon Jovi.

About a week before the Pats-Colts game I spent a Saturday night channel hopping with my roommate; we finally stumbled on When We Were Beautiful, the rockumentary of Bon Jovi. When We Were Beautiful is an intimate, depressing look at Bon Jovi's obsession with his own legacy, his neurotic and compulsive need for control, and why he probably hates Bruce Springsteen. More than all of that, When We Were Beautiful reveals the stress that Bon Jovi experiences in the unromantic world of commercialized rock. Bon Jovi's says his legacy will be to touch more people than any other musician, ever. His desire to touch people is actually the extrinsic manifestation for his intrinsic necessity to control everything. At one point in the film, a panoramic shot shows Bon Jovi in the foreground of about 100,000 people at a concert in Munich as he draws their arms right to left with the neck of his guitar. What Bon Jovi wants his legacy to be—an empathetic connection with his audience—and what it actually is—the ability to literally and emotionally control his audience—stands in contrast to the progressive drive of an artist to create.

But Jon Bon Jovi and Bill Belichick have never really created anything. And if you want to be a Legend, you need to create something. You learn nothing about a man based on his success alone. Without creation Bon Jovi is just some guy who sings some songs that are played at bars and Belichick is just that guy who found Tom Brady and won a bunch of games.

The last legendary coach to pace the sidelines was Bill Walsh, the inventor of the West Coast Offense and coach of the San Francisco 49ers. Walsh developed an offense that revolutionized the game and launched the careers of two Hall of Fame quarterbacks. It also won him three Super Bowl rings. Legend is creation, not control.

This is why Bon Jovi and Belichick are friends. They think they can control their legacies. Belichick saw an opportunity to seize it, or at least part of it, by preventing some Sony/Sprint/Taco Bell spokesman named Peyton Manning from touching the field when the game was on the line. How Bill responds to his self-imposed fiasco I suspect is quite predictable; his grip will tighten, he will control more. Bon Jovi will continue to wave his guitar back and forth, hoping that he'll touch more people with 'I'm a Cowboy' than Springsteen's 'Born in the USA' or 'Thunder Road.' While Bill Belichick will one day have his bust enshrined in the Pro Football Hall of Fame and Jon Bon Jovi already sits in the Rock n' Roll Hall, their legends are unrealized. They still need to create them.