Why Anthony Weiner's Penis Is Funny

Who wouldn't rather be sexy than preposterous? 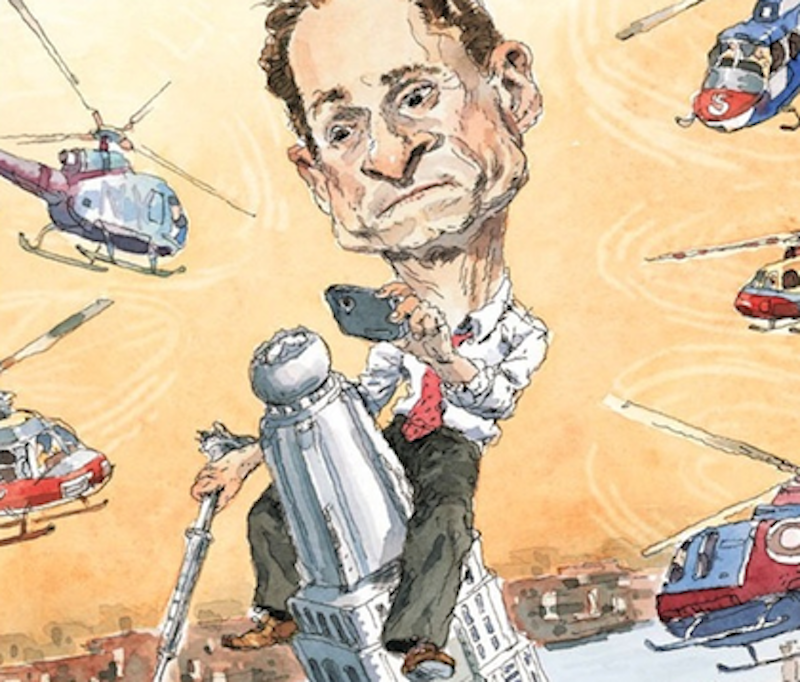 The massive phallic symbol that is the John Cuneo's Anthony Weiner cover for The New Yorker is on its way to legendary status, and deservedly so. Turning Weiner into King Kong and the Empire State Building into his penis was a stroke of genius… and having Weiner photographing his dick/mount couldn't really be much more perfect. Except for the bit where Cuneo sets it up so Weiner has torn off the iconic needle, so that the top ends in a ridiculously suggestive knob.

For all its visual wit, though, there is one thing that the cover does not do. It doesn't sexualize Weiner. The guy is fully clothed, and his stare is abstracted and slightly sad—adamantly not come-hither. Weiner may be thinking about his penis, but we, looking at him, are not meant to think about his penis in that way. Despite what seems like a really substantial amount of effort on his part, Weiner is not here, and is not in general, seen as a sexual object.

So, why not? Why hasn't Weiner followed in the footsteps of Paris Hilton or Kim Kardashian? Why is he just a laughingstock, rather than a laughingstock and a pornographic stimulant?

"The stark contrast between what the crotch shot hopes to accomplish (a fluttering in the receiver’s chest, a sigh of desire) and what it actually achieves (blech, meh, or huh?) makes it especially embarrassing. […]

Though some women are turned on by graphic sexual imagery, they’re a statistical rarity. Study after study shows that, while men respond to pictures of female genitalia, women don’t tend to love the sight of naked man parts unless said parts are placed in an emotionally evocative context."

Waldman adds, "The male member is not an objectively lovely thing," and insists that women in general really don't want to look at sexy images unless they are sexy images in an emotionally nurturing and meaningful context.

There are a number of problems with Waldman's argument. First, the idea that women don't respond to sexual imagery is contradicted by massive amounts of evidence. Women are perfectly willing and even eager to look at fetishized pictures of sexy humans—as long as those sexy humans are other women posing in fashion magazines. Second, the claim that women are not interested in male members is also belied by a great deal of testimony. Nancy Friday, in her classic collection of female fantasies, My Secret Garden, devotes an entire, eye-opening chapter to woman after woman confessing to checking out male packages wherever they find them. For that matter, Barbara Walters testified (amidst much hilarity) that she was perfectly capable of appreciating Weiner's attractions. Maybe Walters is an over-sexed statistical anomaly, but I doubt it.

Outside of a homosexual context, though, art and popular iconography have consistently embraced the tradition of eroticized women, and consistently refused to eroticize men. As John Berger said in Ways of Seeing,

"Women are depicted in a quite different way from men—not because the feminine is different from the masculine—but because the "ideal" spectator is always assumed to be male [….] If you have any doubt that this is so, make the following experiment. Choose […] a traditional nude. Transform the woman into a man. […] Then notice the violence which that transformation does. Not to the image, but to the assumptions of a likely viewer."

A number of artists have taken up this challenge. Here, for instance, is Linda Nochlin's famous 1972 photograph, "Buy My Bananas," paired with the female nude that inspired it. 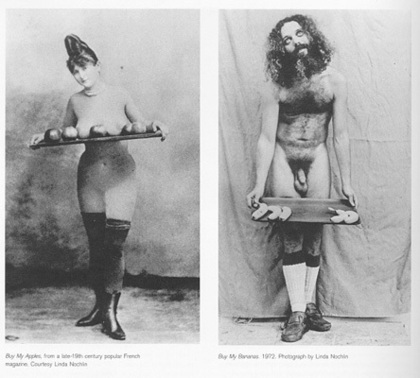 Nochlin's image is not "effective from the standpoint of sexually arousing imagery," as Karlstrom drily observes. But Nochlin's goal was not to produce wank material. Rather, she was trying to demonstrate how our sense of what is sexy and our sense of what is ridiculous are impossible to disentangle from our reactions to, and expectations about, gender.

You could argue men are getting the short end of the… well, the short end. Who wouldn't rather be sexy than preposterous? If everybody is going to be talking about your bits, wouldn't it be better for them to find those bits alluring rather than repulsive? If Weiner, through his own idiocy, deceit, and general vileness, can no longer be a politician, wouldn't he be better off if he could be a sex object?

The answer in each case is, probably not. Weiner is such an idiot that there's no hope for him… but it wasn't so long ago that it seemed likely that he'd be able to put his history of harassment and lies behind him, and get back into politics. The ability to do that, to separate the sexting from the political career, has everything to do with the fact that men are always already considered as separate from their sex. Guys aren't objects, which is why that New Yorker cover ridicules Weiner in part for his obsession with photographing and objectifying himself.  Men have to live with funny penises. But that's a small price to pay for the fact that, unless like Weiner they force the issue, they aren't mistaken for their penises most of the time.