Life is Short, Have an Affair?

Cheating on your spouse is a lie, not a hobby. 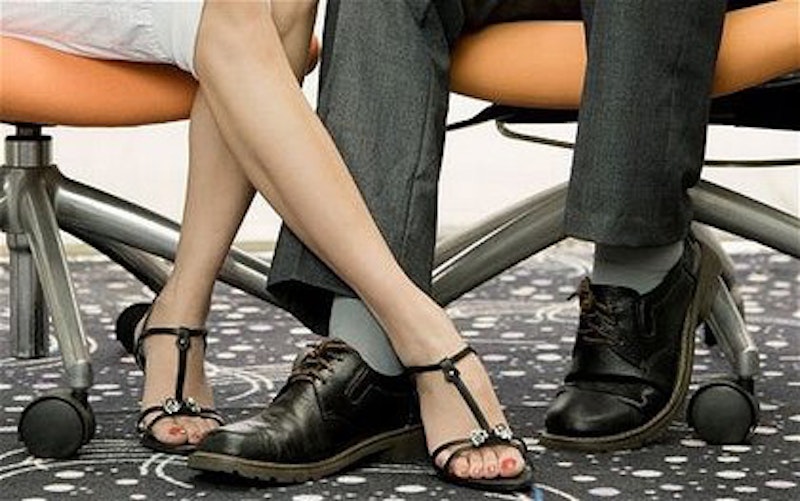 Now that my daughter’s wedding is over, I can return to the relative normalcy in my life, including my exercise regimen. Yesterday, I was back on the Precor machine, which is kind of a mix between a cross-country skiing motion and climbing. Without an iPod, it’s impossible for me to stay on course for more than five minutes, but since my failing iPod only keeps its charge for about 30 minutes, I was forced to plug into the television screen conveniently located on the machine.

Still aglow from my offspring’s recent marital vows, I was shocked to see a Dr. Phil show about a website devoted to aspiring adulterers. Gone are the days of the secret affairs and quick glances across the office. Now it’s easy to get those thrills right in your email inbox. AshleyMadison.com is a website (founded in 2002) for people who want to cheat on their partners. It is geared for two types of clients: people who are married but want to have an extramarital affair, and people who are single, but for some reason or another, desire to date or have sex with a married individual.

Hello? Aren’t there enough hurdles in maintaining a healthy relationship without adding fuel to the fire? The website has grown, in part, through media attention that’s generated when a company, that profits by encouraging people to cheat on their spouses, tries to push headstrong into the mainstream.

The site claims 11 million members and is rapidly growing. It’s the main source of profit for its parent company, Avid Life, which brings in over $20 million annually. The founder of AshleyMadison.com (named after the two most popular baby girl names in 2002) is Noel Biderman. Through his research, he came to the realization that 30 percent of users of Internet dating sites stated that they were single, when, in fact, they were not. And so he discovered his online niche market. Sixty percent of Biderman’s users are men and the women users are a mix of real life desperate housewives and single home-wreckers who get a kick from going out with married men.

The site has made Biderman rich but not necessarily popular. Trish McDermott, a consultant who helped found Match.com, accused AshleyMadison.com of being a "business built on the back of broken hearts.” Biderman’s push to advertise on public transportation in his hometown of Toronto was denied. ESPN has refused to air their ads and the venture gained attention when Fox rejected them for its Super Bowl broadcast.

So, how can a website for wannabe infidels be so successful? It’s legal but it’s illicit in that it helps users violate their sacred vows and engage in deception. Biderman subscribes to the theory that “Monogamy is a failed experiment.” I wonder if anyone has told that to his wife and two kids. I guess it’s business as usual. He espouses how his site is allowing people to be honest about affairs, but isn’t cheating inherently dishonest?

A recent undercover Redbook report discovered a much more interesting and in some ways, ironic discovery, about what is sought at Ashley Madison. Allegedly, while men and women using the site were there purely to experience a no-strings attached sexual affair, on closer inspection the report found many people looking for an emotional attachment, something to rekindle their best selves.

Biderman’s corporate slogan is, “Life is short—have an affair.” Life is short. And so is time in our close, personal relationships. When we choose to save our best selves for those outside of our real commitments, the places in the heart that need the most nurturing and diligent care can fade and die.

I believe the place to engage in a hunt for what is missing in a marriage is within the marriage itself, not through an adultery brokering website.