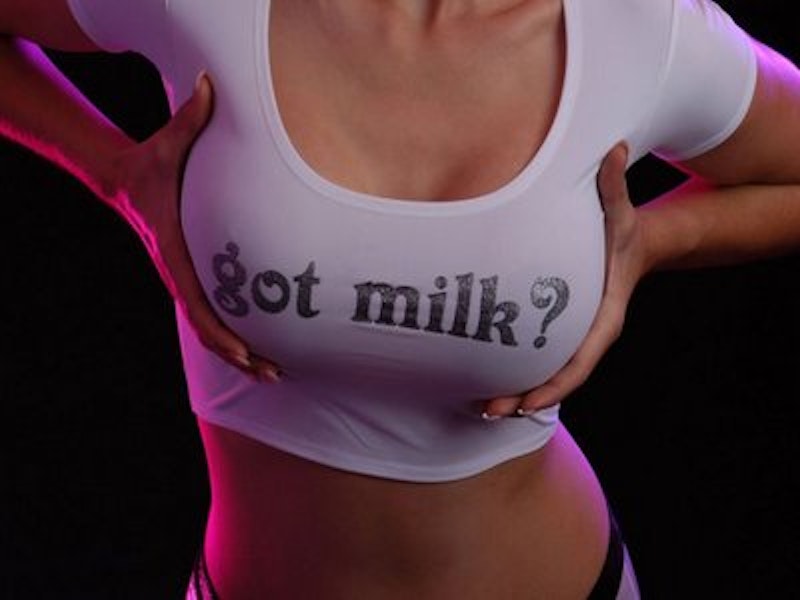 I wouldn't necessarily reject that equation altogether. But while doing research for this article, I ran across a pornographic story that suggests a slightly different, less uniformly positive, explanation.

The story is the e-book "Accidental Dairy Maid" by Venus Santiago. The plot is simple and efficient: Lily gets a temp job at a company which turns out to be in the business of creating human cows through an unspecified process; it then sells their milk. Lily's job is to help with the milking. She does so, along the way getting oral sex from the "cow." The story ends with a satisfactory orgasm for Lily as she thinks about how much she enjoys her new job.

"Accidental Dairy Maid" is cheerfully perverse: everyone, milkers and milked alike, are blissfully happy. Still, that bliss is ringed around anxiety. In the first paragraph of the story, Lily is very nervous.

Lily had no idea how she'd gotten herself into this mess. Her hands felt clammy as she wiped them on her business suit. The temp agency had seemed very respectable, and all her references had been checked. Her old boss had even called to tell her he'd put in a good word. But why was she standing in front of a dusty warehouse door in the middle of nowhere?

The worry here is about work; Lily is concerned that there's something wrong with her job—that she has gotten the wrong directions to the wrong place for the wrong employer.

The rest of the story is devoted to wiping away that anxiety through a fairly literal vision of maternal abundance. The first person Lily encounters from the company is described as follows:

A sweet faced young woman stood there. She had mousy brown hair pulled back in a pretty French twist. Her eyes were warm and brown, her lips full and lush and prettily pink with lipstick. However, her most obvious feature was her large bosom. The woman's suit jacket was nearly bursting the buttons that held it closed and tucked between her enormous breasts was a gold locket—it looked old fashioned but charming.

Sweet face, large bosom—that's an analog for mom. And all the other women in the company are on that pattern as well, giant bosoms everywhere. "It was like expecting to do filing and finding out you were filing with a bunch of Hooters girls," Lily observes nervously.

As this indicates, even surrounded by mom upon mom, Lily's discomfort doesn't vanish. On the contrary, the mega-moms with their mega-breasts make her more anxious, an anxiety expressed in part through arousal.

Penny was still talking, and her large breasts brushed against Lily's arm in a way that was—well, it had to be unpleasant, didn't it? Lily was a good girl. She'd never enjoy something like that. It was wrong. It had to be wrong. It couldn't feel good.

When Lily actually gets out to the milking stall, she becomes even more worried, and even more stimulated. As she readies a cowgirl named Bessie for the suction, her hands are "clammy"—recalling her sweaty palms at the story's beginning. Then, all at once, her tension resolves into more directed emotion.

Bessie's eyes were closed in what was obviously pleasure. She liked this. She liked being fondled and milked, and suddenly it made Lily angry. Bessie shouldn't be placid and quiet, just letting some strange woman treat her like a thing. Lily grabbed the nipple hard and twisted, angry, looking for a reaction. Bessie leaned her head back and lowed like a cow. Lily felt her pussy clench, so she did it again, and again Bessie lowed.

Eventually, Lily gives up on the anger and goes with the lust, slapping Bessie's ass and breasts, and making the docile cow perform oral sex on her. At the story's climax, "Lily grabbed Bessie's hair with both hands and thrust against her face, fucking her the way a man might, taking her own pleasure and not worrying a whit about hers." A couple of paragraphs later, the story ends, with Lily coming down from her orgasm and telling herself with satisfaction that "this was a good first day on the job."

The "Accidental Dairy Maid," then, is in a lot of ways as much about work as it is about sex. Lily defines herself as a worker, and the (very) prominent, domestic femininity of her job upsets and excites her. She becomes angry at the cows for their failure to be independent women, for allowing themselves to be treated as "things," and, not coincidentally, for their failure to work. Penny, who trains Lily, repeatedly refers to Bessie as "lazy." To make the cow productive, Bessie has to be slapped, handled, and sexually used (via a large mechanized dildo.) Lily's anger at Bessie's disempowerment bleeds into a willingness to exploit or use that disempowerment, which in turn makes her, as she says, sexually the "man." Through using Bessie, finally, Lily dispels her anxiety about her job.