We All Hate Our Boobs

Supersizing, panhandling and moratoriums, oh my. 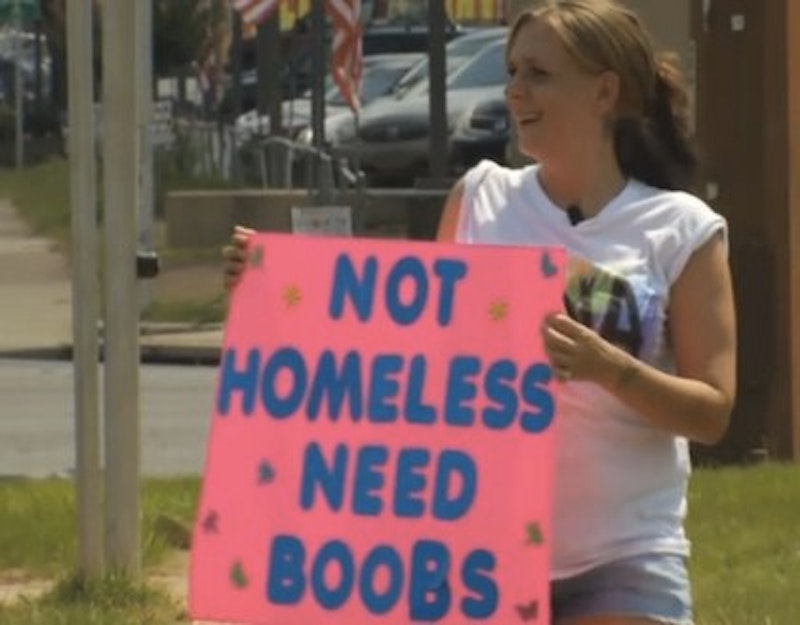 Lots of news about boobs lately. In England, a number of stories have run detailing the desire for women to obtain a “super boob job,” which is defined as an operation that increases your bust size by at least four cup sizes. The number of British women seeking the operation has doubled in four years. Last month a woman in Florida actually panhandled on the side of the road to collect money for her boob job (her handmade sign reads “Not Homeless, Need Boobs”). And in Louisiana last week, the state boxing and wrestling commission has placed a six-month moratorium on MMA fighters, wrestlers and boxers who have breast implants.

"If they want to look good, then they don't have to be in the ring," said commissioner Harold Williams during a meeting at the Louisiana State Capitol covered by the NOLA Times-Picayune.

This ruling is undoubtedly going to tick somebody off; a few fights have already been canceled. Don’t male wrestlers get pectoral implants? Are there post-op trans fighters with breast implants? That commission is treading on thin ice when they start regulating human bodies because they’re afraid of busted-implant lawsuits. Aren’t the women who were just forbidden from fighting going to sue the boxing and wrestling commission for workplace discrimination? Also the commissioner’s quote is completely ridiculous. I don’t think women are the only ones trying to “look good in the ring.” Has he seen the pro-curly haired, wax-shined, glitter and sequin wearing men out there? It’ll be interesting to see if any other states take similar measures. Doubtful. No other state has implemented such a ban, though a few require breast plates, which also seems pretty odd.

I don’t think I’ve ever met a woman who loves her boobs. One way or another, we always seem to want them different. I remember being the only girl in sixth grade with boobs and being mortified because our Catholic school uniforms made them obvious. Developed lifelong bad posture from slouching my shoulders to try to make them seem smaller. Had a D cup by high school, which I still have, though gravity and breastfeeding has taken its toll on the poor girls. Women who want bigger boobs should be careful what they wish for. Big tits are a total pain in the ass—or more specifically, the back. Just ask my chiropractor. If I had the money, I’d be first in line for a boob job: a reduction and slight lift for me (with a side of tummy tuck). It would make all the bouncing in hip-hop cardio easier, and man would I love to have it done so I never had to wear a bra again. Heaven.