Women of the World Take Over

Marie Calloway’s essays shred into the feckless beta-males she meets and expose casual sexism in even the most "leftist feminist" men. 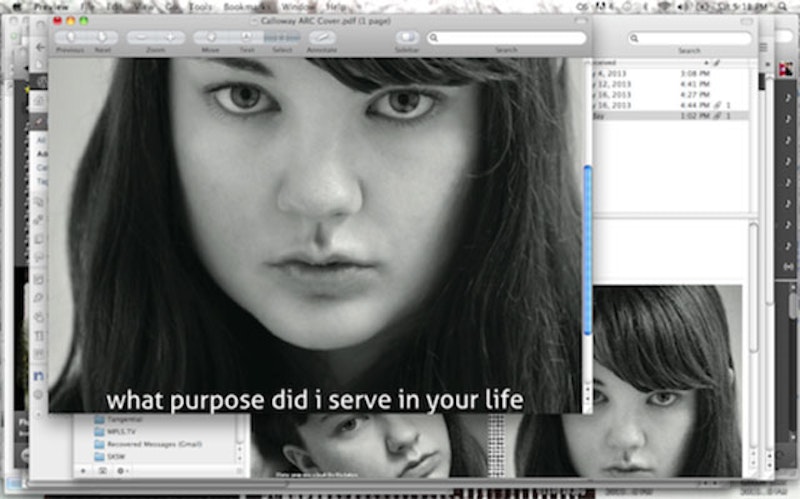 Plenty of alt-lit is vacant and dull, devoid of anything but affected detachment and poorly edited observations. Calloway’s tone is instantly familiar to anyone who’s young—it turns bratty, cynical (“the station was small and empty and horrible”), crying for attention and at the same time letting no one in, bearing her heart to her readers only in its abridged and edited form. She’s upfront about never needing or having a job, and the freedom that a trust fund affords her. The most striking thing about what purpose did i serve in your life is its insight into the casual emotional abuse of even the most “leftist feminist” beta-males and how impossible it is to see or begin to understand the vulnerability a woman feels every day, even in a comfortable consensual situation.

Her work here is bold and far beyond what most women her age would admit to, let alone publish in a book. But there is no reason this book should be controversial at all. Of course if it made its way onto The View we might have some problems but to those tuned in to its very existence, well, maybe you’ll find it as moving as I did. Pages away from “Adrien Brody” you’ll find close-up pictures of Calloway’s mouth filled with the subject’s cum, and flattering selfies overlaid with ignorant, sexist criticism of her writing and body. For what it’s worth, she’s beautiful, despite refrains like “I am worried about my face, “I am ugly,” “My legs look fat”—these body neuroses are far too common in women across the board. Calloway’s depiction of the actual sex is unremarkable and intentionally bland. Her sharp observation for the latent, ancient sexism present in even the most shy cute hipster boys is what makes this such a cutting book, speaking as a man. The quote presented at the beginning says it all: “Because of our social circumstances, male and female are really two different cultures and their life experiences are utterly different.” This writing is unsparing and confrontational in its questioning, and this is the way we should be parsing sex today.