The Down Low Husband Says No To The DL 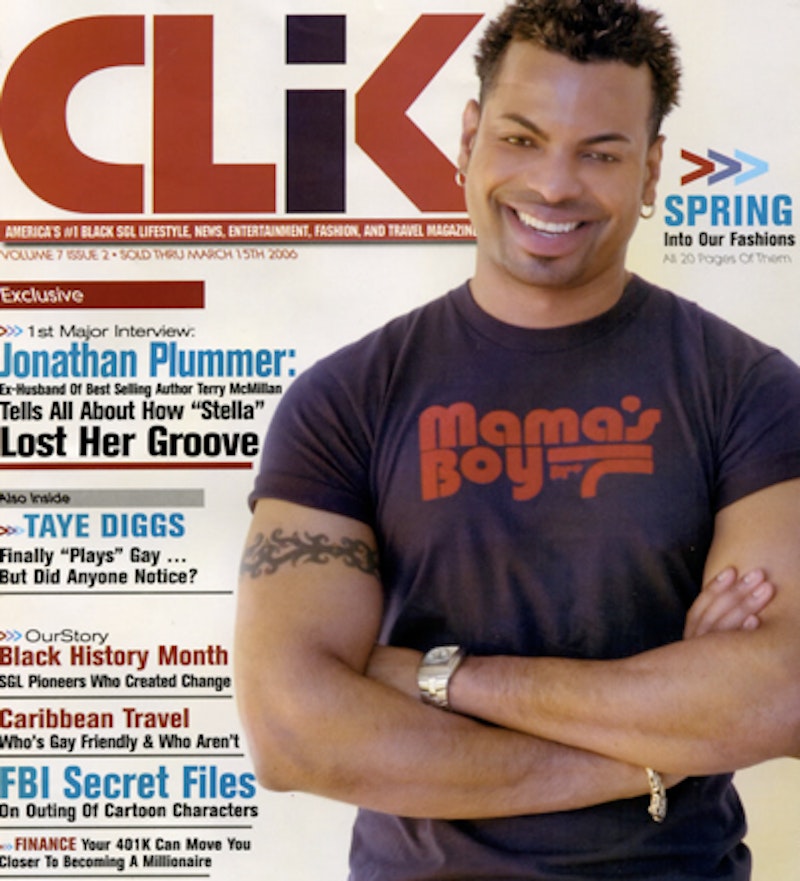 Or at least that’s how the media told it five years ago. As we all know, sexuality is a complicated matter, and Plummer was least partially a victim as well.

Now 34, Plummer has accepted himself and reconciled with McMillan, with whom he reappeared on Oprah a couple weeks ago.

Plummer is currently living single in Los Angeles, starting a pet grooming business and hosting a new web series, No More Down Low, a lifestyle show aimed at embracing the diversity within the black gay community.

Plummer spoke to me about how he made up with his ex-wife, growing up gay in Jamaica, and why his new show is important.

Aymar Jean Christian: How did you come to host No More Downlow?

Jonathan Plummer: It’s all about empowerment right now, so I think it’s appropriate. We’re trying to change to whole stigma about the down low. It’s a struggle with your identity, and once you’ve overcome that and you embrace your sexual identity and sexuality, it’s very liberating.

AJC: But the show is obviously not just about down low, at least according to your first episode.

JP: It’s going to highlight all the positive aspects of being black and other ethnic groups who are doing amazing and empowering things in the community but whose stories cannot reach mainstream media. There’s one episode where we’re going to talk about a lesbian couple who’ve lived together forever. They are in a committed relationship. We highlight those things that you don’t really see in the community.

AJC: I saw that you interviewed Wanda Sykes on the first show. That must have been exciting!

JP: She’s amazing. An amazing, amazing woman! I was nervous actually to meet her. It’s Wanda Sykes. I definitely commend her for coming forward to speak her truth. And I wish that more people would come forward to stand on the forefront and let people know: “This is who I am. Do not judge. I’m just like you. I live a normal lifestyle. I do the same things. I put my pants on one leg at a time.”

AJC: A lot of people have connected the lack of openly gay public figures to the recent spate of bullying, teen suicides, even the controversy over Bishop Eddie Long.

JP: We need to let people know it’s okay to be gay. Whether your gay, straight, lesbian, transgender or bisexual, whatever orientation you identify as, we need to address those issues more often. Thank goodness we have shows like Glee, Modern Family, Brothers and Sisters, Desperate Housewives, it portrays those relationships in a positive light. If we address that issue, that we don’t need to hide anymore, we can definitely progress and move forward. It’s normal. It’s not a chosen lifestyle.

AJC: What was it like growing up in Jamaica? The country has a reputation, deserved or not, for being homophobic.

JP: Being from Jamaica, I was never exposed to same-sex relationships whatsoever, because Jamaica’s a very conservative country. We’re governed by the church. Leadership from the church dictates how we should live our lives. It’s mind-boggling. I definitely feel sorry for the people who are living there who are hiding their identity. With this show, with me being of Caribbean dissent, I’m comfortable with my sexuality, and I wanted to share my story: yes, I was in deep denial for many, many years. And it took a lot of courage to be honest about my identity. And I told my wife, but unfortunately the outcome was horrific! But you have to find your happiness and you have to tell your truth and eventually there’ll be a light at the end of the tunnel.

AJC: Have you been back home?

JP: The last time I was in Jamaica was January of this year.

JP: Well, it’s been about eight years since I went back. Especially when I came out I just could not go back there. I was fearful for my life. And also for my family that are there, I didn’t want anything to happen to them. All the scrutiny that came with my coming out here, they got some of the backlash in Jamaica as well. This time around in January, I actually went back and it was good for me. I haven’t seen a lot of family members for many years, and it was another way to reintroduce myself to them. It was fine. It was very liberating for me. They saw that I’m the same, and it was like nothing has really changed.

AJC: Here in the US, much of the news we’ve had about Jamaica, aside from recent events, have been about homophobic attacks. So that must have been scary for you.

JP: Yeah, exactly. That was another reason why it took me this long for me to go back there. But this time I did the whole touristy thing. I snuck in, and snuck back out! I didn’t really get the chance to do much because of the circumstances. But I definitely will try to go back again sometime next year.

AJC: Everyone knows you through your ex-wife. How is your relationship with her now? You were just recently on Oprah.

JP: Right, yes. Things are good. It took us a long time to get to this point, but she’s accepted me for me. Things are good, and I’m glad that we are at this point in our lives. I wish her all the happiness in the world and that she finds true love again. And she definitely wishes the same for me as well. I’m glad that that part, all the sadness and the hurt and the resentment and negativity that came with it, is kind of tucked away in a chest.

AJC: In the years after you came out, we saw a lot of hatred, and some of it came out in the press and blogosphere. So it’s amazing you both made up.

JP: We both needed to get to that point ourselves, on our own. Because it ate us up, like termites, like a sore, and it just consumed us. We didn’t take care of ourselves. It just consumed my life, and obviously hers. We were both being vindictive with each other. If she did something, I did something to react, and vice versa. We both were at it with a vengeance. It just took us a long to get over that, and I eventually kind of did. I eventually gave up. I just couldn’t fight this fight anymore.

And the moment she threw the towel in, something was just lifted between the two of us. We both went into the old routine that we both had.  There was some form of normalcy between us, without the intimacy aspect of it. We would talk about just random things. I’m really glad that we’ve forgiven each other and are trying to move forward.

AJC: That’s amazing, that you two can just talk casually like that.

JP: Well, you know, this just happened recently, like within the last six months to a year, where we just started talking. We went, like, many years without saying a word to each other. Now, every now and then, she calls me just to check in. And vice versa.

AJC: How is it being black and gay in Los Angeles?

JP: It’s actually pretty good. I really like being in Los Angeles. It’s different. I don’t miss San Francisco as much as I thought I would. There’s a lot to do here. I’ve definitely stumbled across a lot of people. I have a lot of acquaintances here. I’ve gradually built some core friends, which is great.  It’s nice. I’m in the process in acquiring a pet grooming business. So that’s my other side job. I’m a pet groomer by day, and I’m doing the web on evenings and weekends.

AJC: Oh, you’re getting a business? Did you get money from the divorce to help you out?

JP: Not really, and we’re not even really talking about the settlement.

AJC: What is the problem, or the major problems, you find in the black gay community in America?

JP: I see a lot of black gays not being as comfortable with their sexuality. And once they’re out and they’re only gay in the West Hollywood areas. Like if you see them walking down the street at the Beverly Center, you would not know that they’re gay. They don’t embrace it. If they’re with someone who’s their boyfriend or whatever, you don’t see them holding hands walking down the street. I mean, I’m not saying that it’s inappropriate to not flaunt it, the fact that you are gay, but it’s kind of like you do things with your partner in the gay community that you don’t see in the heterosexual community. And for me, I’m very openly gay. I don’t hide, and my friends know, and if you’re with me, I want to, like, hold your hand. I want to touch your shoulder, or just give you like a hug or something. I wish that people would be more open with themselves and not really conceal it in the general population and in society. So that’s my biggest concern. I wish they would own it.

AJC: You once said you were ready to meet your life partner. Any success?

JP: No, it’s hard. It’s truly hard. I mean, I’m open to it. I was looking for a while, but I’m not any more. I’m going to see what happens. But I’m not opposed to it. It’d be nice to share my life with somebody eventually. I’m just putting it out there and seeing what happens.