Teacher-student attraction, through the ages. 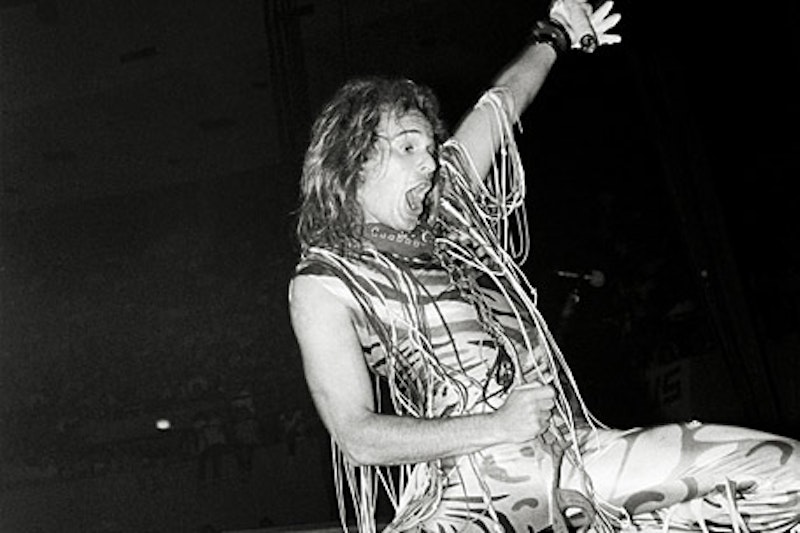 Sex and kids is a sure-fire recipe for controversy, and inevitably the “Hot for Teacher” video inspired protest and condemnation from the usual quarters. Looking back on it, though, what’s most notable about it is its resolute unsexiness. Part of that can be chalked up to changing styles and perhaps personal preference—the thin-as-a-rail, teased-out 80s models who play the part of eye candy seem more like weirdly dated manikins than like actual fetish objects. When the camera lingers hungrily on the back of teacher’s skirt, the main impression you’re left with is, “Jeez, that woman has no ass.”

But there’s more to the lack of heat than just changing fashion. Considering the subject matter, gyrating female bodies are really on camera for a remarkably limited period of time. Instead, we get a lot of Van Halen performing a consciously campy Vegas dance routine beneath a glowing disco ball and numerous shots of Waldo, a bespectacled Clark Kent-like kid paralyzed with nerdiness. And plenty of footage of Van Halen partying. With kids.

The truth is that the video isn’t really about lusting after the teacher at all. Instead, it’s about lusting after a childhood in which you lusted after the teacher. The short film is focused on adults imagining how cool they could have been in high school if they had known then what they know now—and, simultaneously, on kids imagining themselves as being adults. The Van Halen band members are portrayed both by the real Van Halen and by a group of kids dressed like the adults. The video unabashedly blends both identities, with the adults sitting right beside their younger selves in class and the kids lip-syncing the lines in the voices of their grown-up doppelgangers. The hot teacher is just an accessory; a convenient stand-in for the real passions, which are between male adults and their younger iterations. The adults want the rebelliousness and goofy energy of youth; the kids want the sexual opportunities and confidence of grown-ups. And both achieve their dream not by sleeping with the teacher, but by rocking out.

Unlike Van Halen, when Ke$ha sings about intergenerational sex she really sounds like she wants to have sex with someone other than herself. Van Halen never even bothered to name the teacher they were hot for; Ke$ha does so right in the title of her 2010 bonus track “Mr. Watson.” The song is addressed specifically to the object of affection, rather than, as with Van Halen, to a generalized audience of like-minded horn-dogs. “Oh boy I just can’t wait for history class / It’s my favorite hour of the day,” Ke$ha coos at the song’s opening. She’s got the giddy, giggly energy of a high school crush—a far cry from David Lee Roth’s entirely impersonal concupiscence (“I wonder what the teacher is going to look like this year?”)

As this suggests, Ke$ha is much less coy about pretending to be an actual student than the Van Halen guys. For Van Halen, the whole point of the song was the frisson between then and now. Ke$ha, on the other hand, comes on as if her wriggling butt is actually in one of those plastic chairs. Instead of Eddie Van Halen’s swaggeringly virtuoso guitar solo, “Mr. Watson” is all bouncy bubble-gum choruses, chirrupy girl-group harmonies, and Ke$sha’s producer-sweetened, mewling vocals.

Part of the reason that Ke$sha’s song seems less distanced is perhaps that she’s playing an older student—someone of at least high school age. Or at least, I really hope that’s what she’s doing, because the song is significantly more explicit than Van Halen ever dared to be. “I can’t put my finger on what’s so sexy / or why I want you in my bed / (or on your desk) / is it your power or authority / or for the thrill of being bad?” If Van Halen’s version of teacher-sex basically involved having the hot authority figure available as an opportunity for male bonding, Ke$sha’s version is a lot more direct in its desire to seize the rod of puissance. (“I want to get my hands in your khaki pants … mrow!”)

At first glance, Ke$sha’s song seems to serve equally as male or female fantasy (as she says, “I know it’s a fantasy of yours / you know it’s a fantasy of mine!”) And certainly, the kittenish yet sexually aggressive schoolgirl complete with Catholic uniform is a male porn staple. Still, the song vigorously objectifies Mr. Watson in a way that doesn’t necessarily cater to male tastes. That khaki pants line, or Ke$ha declaring “Up on the chalkboard I just love your ass / when you write notes it’s just shake, shake, shake”—you get the somewhat uncomfortable sense that she’s making fun of the guy.

And indeed, though he is named, and gets a specific ass and pants to call his own, at bottom (as it were) it’s not clear that Mr. Watson is any more real than Van Halen’s gyrating 80s manikins. Ke$sha is explicitly lusting after and somewhat more subtly mocking a stereotype or an icon, not a person. The excitement of the fantasy is, as she says, the ability to be girlish and innocent while simultaneously seizing sexual power. The switch in gender and genre changes the exact mechanics, but the point isn’t that far removed from Van Halen’s. Lusting after a fantasy teacher is a way to make the student more confident, sexy and real.

The music here is sparse electropop. The synth hook references girl groups, but without Ke$ha’s anthemic horniness. Instead, the harmonies are wistful and the cadences don’t really resolve. Instead the song drifts. The catchy melodies wash up against one another and the song at various points seems to stop before picking itself up and moving on again, as if it’s unsure when or where to end.

The point is fairly obvious; from a lesbian perspective, high school sexuality is less about seizing power and more about confusion, questioning, and a swooning loss of self. Van Halen and Ke$ha know what they’re after, but Ina Unt Ina doesn’t even know why they’re after what they’re after. “Early morning, on the roof, I’m secretly looking down/watching you move, watching your hands, I’m secretly looking down.” The distance between student and teacher which is so exhilaratingly easy to bridge for David Lee Roth or Ke$ha, here becomes unbridgeable. Desire doesn’t pull Ina Unt Ina near; instead it pushes them out and up and away. The song finishes with the singers chanting “don’t know how to get close to you/don’t know how to get close to you.” Desire is never consummated, and if the singers know themselves somewhat better at the end of the song than they did at the beginning, that knowledge only leads to more, and more poignant, uncertainty.

Again, this is intentionally a song about being gay. Yet of these three songs, “Teacher” is easily the closest to my own experience of heterosexual high school crushes. Said crushes were not, as far as I remember, particularly empowering and/or triumphantly lascivious. Instead, they were, for the most part, confusing and destabilizing.

Of course, Van Halen and Ke$sha aren’t going for realism. They’re going for dreams of invulnerability; a kind of super-hero version of hyperbolic heterosexuality. I get the appeal—both “Hot for Teacher” and “Mr. Wilson” are great songs. But I think we all learned in school that love is queerer than that.