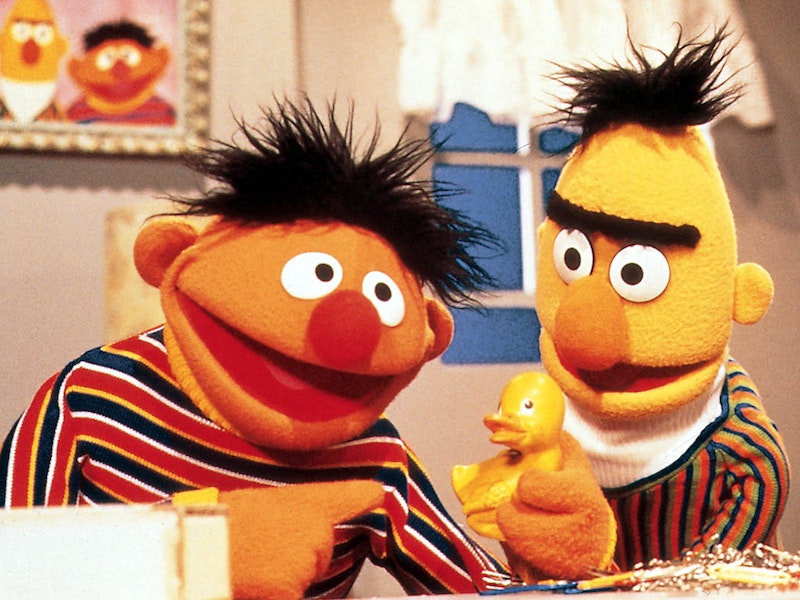 It’s been a go-to gag for years: Sesame Street’s Bert and Ernie are gay. Two otherwise unattached guys who live together, spend most of their time together, and sleep together. (Yeah, in separate beds, but still.) The Broadway hit Avenue Q had no small amount of fun with the concept with its Rod and Nicky (Rod is its uptight Bert character who finally comes out at the show’s end), and jokes that the couple’s expense have come from any number of outlets; according to Wikipedia, these run the gamut from Saturday Night Live and Family Guy to Glee, Friends, and The Mentalist.

But the rumor is getting new life thanks to a piece in Sunday’s Los Angeles Times, whose centerpiece is a Bert tweet from June’s premiere of The A-Team movie: “Ever notice how similar my hair is to Mr. T’s? The only difference is mine is a little more ‘mo,’ a little less ‘hawk’.”

“Mo,” of course, is a slang term for “homosexual.” (And should not be confused with “The Big Mo”—meaning momentum—lest we get the wrong idea from a headline like “McCain Has the ‘Big Mo’ in Arizona Race.” According to the Times, several gay activist groups have seized on Bert’s tweet, and gay pop culture site AfterElton.com’s point that the telltale tweet occurred during a week when many cities were hosting Gay Pride celebrations.

Bert and Ernie are, of course, Muppets, and thus have no sexuality—or even consciousness—of their own. But the Times article notes that Sesame Street has been host to a number of notably gay celebrities recently, including Neil Patrick Harris (as “The Shoe Fairy”) and  Wanda Sykes, while Black Eyed Peas frontman will.i.am sang a song about accepting yourself for who you are.  “Did Will.i.am just sing the next gay pride anthem on Sesame Street?” an AfterElton.com commenter wondered.

Sesame Street denies any gay agenda, saying that it strives to teach lessons of inclusion (The answer to Grover’s question, “What kind of people can you love?” is “Any kind”), while Jarrett Barrios, president of the Gay & Lesbian Alliance Against Defamation (GLAAD), maintains that the show is just reflecting the times, as it always has.

“As more and more loving and committed gay and lesbian couples begin families, it’s important that their children see representations of their families on their favorite shows,” the Times quotes him as saying. “Sesame Street has a long history of teaching children about diversity and acceptance, and I don’t expect that our community will be left out of that education.”

All well and good, but one does wonder whether the image of Sesame Street as being overly LGBT-friendly will have legs—especially of the political kind. The GOP is still beating up on NPR for its seemingly knee-jerk firing of the usually vacuous Juan Williams, and renewed calls for defunding either the radio broadcaster or parent company the Corporation for Public Broadcasting (CPB)—which also operates PBS—have come from the likes of Newt Gingrich and Mitch McConnell (R-KY).

Heading into a political battle that might affect the funding of programs like Sesame Street probably isn’t the wisest course. As a blog on FoxNews.com points out, when the Gingrich-led Congressional majority tried to axe federal funding for the CPB (Gingrich derided public broadcasting as a “sandbox for the rich” and accused the CPB of “eating taxpayers’ money”), the public broadcasters fought back with Muppets.

“Make no mistake about it, this debate is about Big Bird and Oscar the Grouch and Barney and Kermit and the new Republican majority that would put them on the chopping block,” Rep. Nita Lowey (D-NY) said at a Congressional hearing, where she was joined by Bert and Ernie. “Mr. Rogers’ Neighborhood is much more popular than Mr. Gingrich’s Sesame Street.”

The measure died, probably a few seconds after the Muppets arrived. “It was Big Bird that killed us,” concedes former House Appropriations Committee Chairman Bob Livingston (R-LA), who had pushed hard for the defunding.  There’s no reason to think that a similar counter-strike wouldn’t be used if Republican lawmakers follow through on their threats this time. And gay panic doesn’t play well when it comes to kids’ TV, either; Jerry Falwell’s consternation that a seemingly gay character on Teletubbies has remained a punchline, and figured prominently in his obituaries.

Which brings us back to Bert and Ernie. Muppets with a sinister, anti-American agenda? We’ll never know for sure. What goes on behind the closed door at 123 Sesame Street is nobody’s business.