Talking to Your Teen About Sex

If you tell them to “Google it,” you’re doing something wrong. 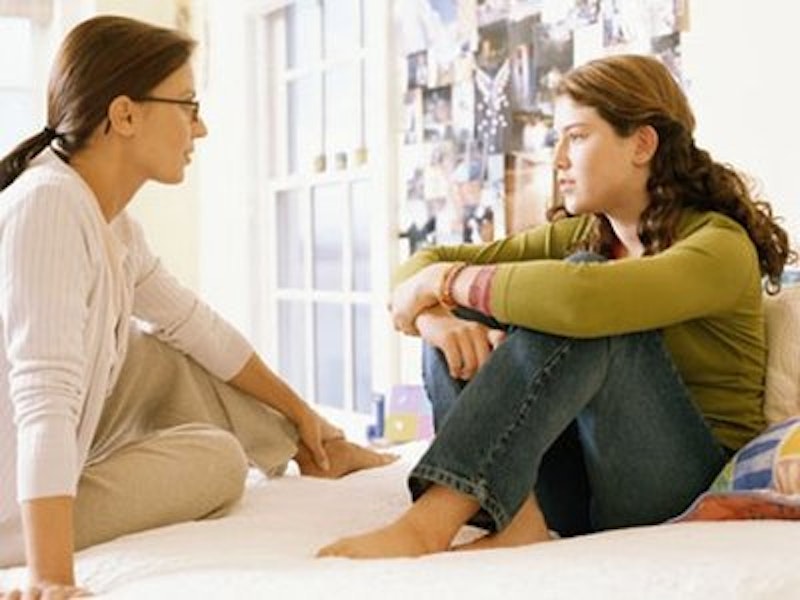 Navigating your way through the first decade and a half of parenting can be relatively easy compared to the teenpocalypse years. Especially with girls, the tween years alone are full of more emotional and psychological drama than a rejected script for a bad Lifetime movie. I sneer when parents complain about “toddler temper tantrums”; it’s all I can do not to warn them about finding dried puke-covered prom shoes under a bed or a dead marijuana plant in a closet. I try not to say, “You just wait,” because I hated it when people said that to me.

Talking to girls about sex can often start with talking to them about periods. Schools show “The Period Movie” in fifth grade, so first you have to decide if you want your kids to learn stuff a.) on the bus from the slutty eighth grade girls b.) before the movie, from you in an educated, relaxed setting c.) during the movie, followed by a chance to discuss it with you afterwards, d.) from a book  or e.) on the Internet. Here’s the deal: we can’t stop “a” and “e” from happening, so it’s probably better to talk to them in the “b” or “c” setting. (And, as in any generation, they also learn a lot of stuff from music.)

As a parent, I’m terrible at initiating any discussions about sex, so I usually choose “d,” the book. With my first girl, I bought her first a “so you might be getting a period” type book and then in high school the “so you’re probably going to have sex and not tell your mom about it” book. Now that she’s nearly 20, these books have been passed down to my other teens/tweens. It’s funny I suck at the discussion, because I couldn’t be more liberal on the topic. I think my kids know they can come to me about anything, I just think most teens choose not to. Can we blame them? We didn’t want to talk to our parents about it either. If there is a family somewhere in which a teen approaches a parent and says, “Hey Mom/Dad, I just have a few questions about sex, can we sit down and talk?” I’ve never met them and also they are probably really weird.

I was forced into the “sex” discussion too soon when my oldest was in second grade and I was pregnant with my third. She asked me “how the baby got in there,” and I basically went all deer-in-the-headlights and gave a completely Catholic-brainwash answer about God and when a mom and dad love each other. It was awful, but I figured she wouldn’t remember it later. When I was pregnant with her brother, she was 12, and her questions were more specific. I answered them honestly and completely, regardless of how damn many of them kept coming. I’d remembered reading that one good approach was simply always honestly answering what kids ask you. After my explanation, she tilted her head and said, “Eww, dad had to do that to you three times?” and so I felt like that was relatively unsuccessful but there was no way in hell I was going to discuss pleasure with a 12-year-old.

Any parents reading this will have to trust me when I tell them that your teens are probably more sexually active than you think. I’ve always had a very open relationship with my oldest, and the stories she told me about the other girls are enough to melt your naïve mind. So I became a purveyor of condoms. I don’t believe that parents have any say in when our teens choose to have sex, and sure didn’t want to be a grandmother in my 30s.

It amazes me how many parents seem to think they can micromanage the virginity-loss decision on behalf of their offspring. Did we let our parents decide when we’d have sex for the first time? Of course not. I had to sneak to the Planned Parenthood in a shitty neighborhood for birth control pills, and I knew I didn’t want a girl of mine to go through that. So as my daughter started having more serious boyfriends, I bought condoms (plus a trip to the gynecologist to discuss the pill as an option) because who knew if the boyfriend would buy them. From what I’d heard, no teen really wanted to walk into the Walgreens and purchase condoms. I probably prevented a few teen pregnancies in our local high school, because my daughter gave them to girls who were too afraid to talk to their moms, or whose boyfriends might not have had them. When I bought the condoms, I told my daughter “This is protection, not permission,” which I think was a pretty good tagline. It’s not like I was telling her to go have sex, but it was an acknowledgement that when decision was made, she would be protected.

Different kids communicate with us as parents in different ways. A more quiet, reserved kid might not be as open (and kids of differing personalities may or may not need condom purchasing assistance at different ages). One of mine was so clearly embarrassed talking about even tampons that I thought she’d faint. I actually told her to Google it. That’s got to be some kind of colossal parenting failure, but the way I see it, the information is out there, so buying books or finding websites you can suggest to your teens counts, too. Because everyone knows talking about all of it sucks for both parents and kids, and we just have to navigate our way through it one day and one kid at a time.