Galatea in the Real

The viability of perfected beauty between the sheets. 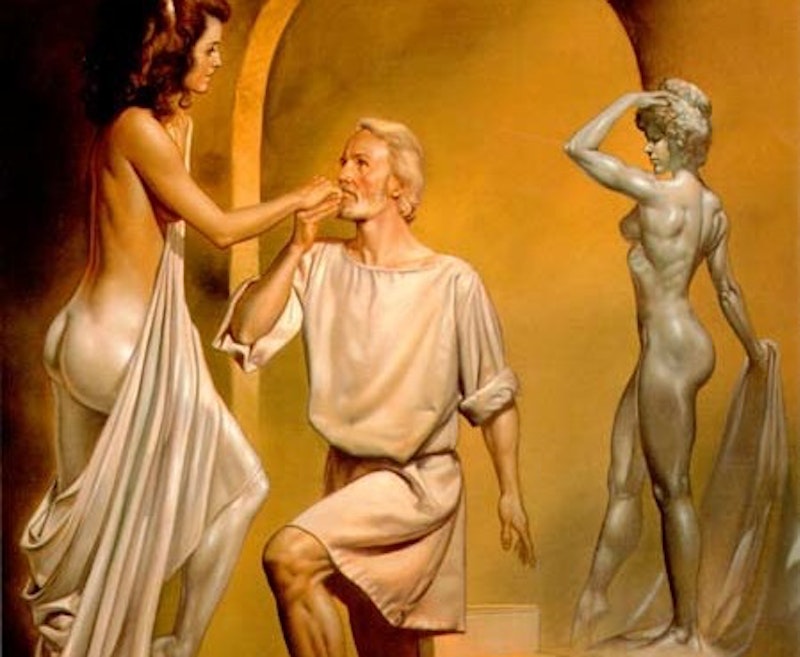 There are three categories of hotness in the world: the Not Hots, the Generally Good Lookings and the Model Hots.

The Not Hots are people who just don’t know how to work with what they have. These are the same people who have probably had a little too much Botox and wear Crocs.

The Model Hots, though, are at the tippy top of the hotness pyramid.

As a gay, I think I’ve always had an eye for hot guys, but “Model Hot” is an entirely separate category, and it’s only since I’ve been working at a fashion magazine that I’ve realized what “Model Hot” really means. A dude who is “Model Hot” stands out from all the rest of us like a midget in a sequin catsuit. Lots of people say, “Oh you’re so hot you could model!” but these people are all liars.

Model Hot is a very specific look, and you can’t look a “Model Hot” guy directly in the eyes. I mean, you could try to but he might zap you with his modelizing X-ray vision, drawing attention to any and all body fat you have. But you’ll want to look because he’s so beautiful it’s almost weird. And somehow he doesn’t seem human at all, more like a perfectly engineered pod person grown in a fabulous laboratory somewhere in Europe.

Until I started working in fashion, I never knew and had never been around any real male models. Like most of us, I’d only seen them in the magazines. So imagine how stoked I was about the first photo shoot I did with the mag—a nighttime beach shoot! Me on a beach with five really hot scantily clad models? Helllooo.

When I met the models the day of the shoot, all I remember thinking was Good Lord! And right there, my brain completely stopped working. Mush. These guys were downright Amazonian, big, chiseled, and slightly intimidating. Real models. I was worried they would know I thought they were hot, or that I’d stare too much and then they would kick my ass, which actually might be kind of fun, but then I remembered that, oh, it’s fashion and everybody’s gay and everybody’s staring at everybody and everybody’s thinking the same thing so it’s probably okay.

By now we’ve all met one another and we’re rolling out to the Hamptons. I can feel myself wanting to talk to the models, mostly because I’m interested in what their lives are like. Show after show after show, Milan, Paris, New York. Ad campaigns, castings, photo shoots.

Okay, so now we’re on the set. We’ve set up the clothes and the photographer is doing test shots. On a photo shoot the models don’t usually dress themselves. That’s the art of the quick change, and the glory of being an intern in a men’s fashion department: one person takes the clothes the model is wearing, and the other person gives the model new clothes to put back on. Okay, so I’m there in front of a Model Hot dude, taking his clothes and trying really hard not to stare/foam at the mouth. I pass.

Could you even imagine having sex with a Model Hot? You’d constantly compare yourself to their extraterrestriality.

Plus, I’d be too afraid to like scratch their face or sabotage their careers by accidentally slipping them a carbohydrate.

Sometimes I really do wonder if extremely beautiful people know they have this kind of effect on the rest of us. I mean, what’s it like to be so beautiful that everyone around you loses all consciousness? It’s like a beautiful curse—and now is the only time I’d ever want to be average.