Insomnia is nearly a fact of life in Manhattan. Cue excessive hypochondria. 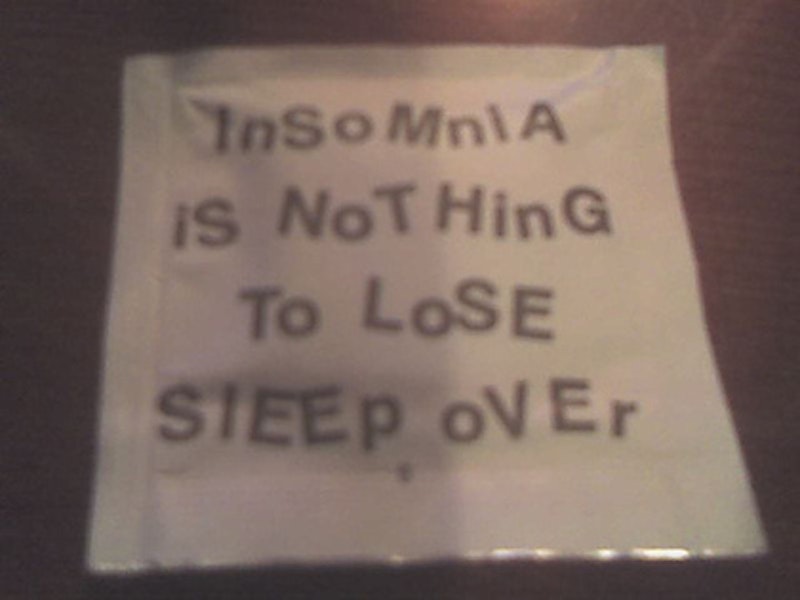 Is this napkin from Hooters? Photo by Justin Marty.

Summer nights in New York City can be excruciatingly hot. Night falls late, and I strip down to my underwear preparing for bed. I throw the few day-things into a pile on the floor beside the bed. Now never seems like the right time to clean up. Always later. Everything later. I organize my whole life this way, with plans to live it later.

My bed takes up most of the bedroom. On one side is the bathroom and closet splayed open and empty within as if sick, bunches of clothes heaped at its mouth. On the other side of my bed is a bank of windows. And in the corner adjoining the windows and wall at the head of the bed, a heating pipe extends from floor to ceiling. During the winter it clangs loudly, as if on some other floor a person is beating it repeatedly with silver soup spoons. In the narrow isthmus between my bedside and windowsill, I have squeezed a small nightstand, underneath which I keep a few sexual how-to books for quick reference during moments of passion, and on top of which you will find a lamp, an alarm clock and a tip jar left over from a night I spent volunteering as the coat-check girl at a charity event organized by one of my friends.

I sleep with all the windows open and a few fans arranged strategically in something of a personal trade wind. Perhaps there is a secret to the airs, I think when positioning them each night before bed, that in my dreams I they might propel me to Africa, thus circumventing exorbitant flight fees and tedious maneuvering around the Cape of Good Hope. I have an air conditioner, but it blows weakly, and is no match for the hot air pouring in through the cracked and broken windows of my charming prewar Village apartment.

With the windows open, I hear the sound of late night revelers, transvestites commuting from club to club, drunken frat boys spilling out of dingy watering holes, and whinnying young ladies, their slurred cries punctuated by their clicking high-heeled shoes. Luckily the M11 bus stops regularly in front of my apartment, and so its engine, revving and slowing, the screech of its breaks, the sound of the doors opening and closing again, swallows up some of the other sounds And then, in the very early morning, the garbage truck arrives, swallowing that sound, too, before it becomes unbearable. I feel compelled to remind you, that I live in the most coveted neighborhood of New York City.

In summer, the windows not only blow in breezes, but also bring in bugs, flies, mosquitoes, and other winged things of which I don’t know the names. Yet I am used to all of this and for more than a year, was able to sleep through much of it. Lately though, I regularly wake up sweating, panicked, eyes wide, blinking in the dark. If I've had a bit to drink, I can usually push this point back for another two or three hours, which is why I've decided to combine my liquor cabinet with my medicine chest. I keep a bottle of NyQuil on my bar tray in the kitchen.

I untangle myself from my sheets, in which I always somnolently form a cocoon. Is this symbolic of a wish to metamorphose? To become… to become… become what? Fitzgerald wrote of his character Amory Blaine that he always dreamed of becoming, but never being. Fitzgerald had trouble sleeping too. He wrote about his insomnia in The Crack-Up. He said he tried everything, even sleeping on the heart side, the left, as it was rumored to calm the body.

Sleepless, my thoughts multiplying in every direction, the dark strangling me, I can’t take it anymore, I must get out of bed! I tear off the sheets in one complete movement and begin to walk from room to room, pacing back and forth and gasping for air. Why am I gasping? Sleep Apnea? Why does my elbow itch? Flesh eating bacteria? I swat a fly that’s come through the window and landed on my bed.

Last night I Googled nine different extremely rare diseases and realized I have all of them. Also, I discovered my apartment is infested by a swarm of such creatures known only to certain remote parts of Africa. I just started getting laid on a regular basis, too, fueling my paranoia yet further. We use condoms, sure, but latex seems so paltry a defense against the great plagues of the dark ages, against modern STDs too, against Bird Flu or Chlamydia, against werewolves! I sometimes worry our lust might summon a demon. Anything is possible.

Philip, my current man, has come on like something of a summer cold or rash, perhaps. I mean that I might have caught a boyfriend. I can’t be sure, without consulting a professional, but I seem to be showing all the symptoms. I keep thinking maybe he’ll go away on his own, if I just don't scratch him for a while, but he is a stubborn itch, Philip. And I find myself more and more rubbing up against him.

Thus, I feel quite sure that I’ll be punished for my sins through VD. To Google to research my symptoms! When I've exhausted all STD research I move on to sites dedicated to menstruation, just to see if I am normal, not pregnant or dying. Of course, every symptom I read about describes me. But how can I be both pregnant and in need of a hysterectomy simultaneously? How will I afford the medical bills? How will I tell Philip? What shall I name them? Am I too old to be sent away to one of those places for wayward girls?

Terrified for the health of my unborn twins, I begin cleaning in a mad fever, certain that my apartment is infested. After I stripped the bed, threw out the pillows, vacuumed the rug, scrubbed the bathroom tiles, and was about to burn all my clothes and books (just Miller and some other inflammatory prose), I looked to the center of the room at the pile gathered. Fearful of what horrible thing has taken up residency in my duvet cover. I wrote an email to Philip.

“Subject: Hello.
I either got VD from you or the Egyptian Beetles that have been discussing our "seeing each other" beneath the bed!”

I stood up from my desk, worried sick about everything I could possibly imagine, as well as all the things I feared I was not creative enough to imagine. Terrified and filled with darkness, I walked zombie-like to the bathroom and closed the door. I pulled down my undies, got into Rodin’s “Thinker” position and started to tinkle. Priority number one! I thought, trying to simplify my thoughts and stay focused on the present. And then, I noticed. I’d gotten my period. Eureka! I was bleeding!

I returned to the computer much calmer than before, and noticed a reply from Philip had already arrived in my inbox. Had he written back to me from the darkness of his own sleepless night? No! Through the window adjacent to my desk, I could make slivers of lights pouring over the and between the water towers adorning the tops of buildings across the street—the first signs of day break. I had made it through to the other side.

“Subject: Hello to you.
What makes you think you’ve got VD? What are your symptoms?”

Damn, I thought. Why did I write that e-mail? I considered my options, figuring some way I might backtrack delicately. I remembered Shakespeare’s line, “Why then, I’ll turn disadvantage into commodity.” I typed carefully, “My heart, it’s red and swollen. I think you’ve infected me.” Why then, I thought, I’ll turn paranoid-delusional talk of VD into romantic preludes to LOVE. Good enough.

If you've ever suffered from insomnia, you know very well the rushing gratitude that comes on with morning—when the birds begin in their noisy off key chorus announcing the new day, or in my case, the sound of the garbage truck arriving out front, the commuters piling into the M11, deliveries being made to the restaurants down below, one truck backing up to the curb beeping rhythmically like a parody of an alarm clock, that heralds the end of night. You feel as if you've been liberated from a prison, but of your own mind.

And so another night closes on the stage play of my insomnia, and all these fancy horrors quickly recede with the approach of dawn. It is a clockwork relief, like the end of a vampire or zombie movie. The sun, all at once and seemingly out of nowhere, cuts through my apartment, like an extraordinary knife my father might buy off an infomercial. And just as I've gathered all of my belongings into the center of the room, and am about to apply the lighter fluid generously, the dawn makes me pause. My anxiety ebbs and it occurs to me—Perhaps I am acting a little bit rashly? Perhaps a simple wash and fold would do the trick?

I turned off the computer and went to my bedroom to lie down again. Now that it was morning, I might get some sleep finally. I lay still for a while before nodding off. My eyes peacefully shut, I thought of Dante and of my own towering potential, a towering inferno in which I am trapped.