Hard lessons learned about seizing the day, all because of an old VHS tape called How to Make Sex Fun, Vol. 3. 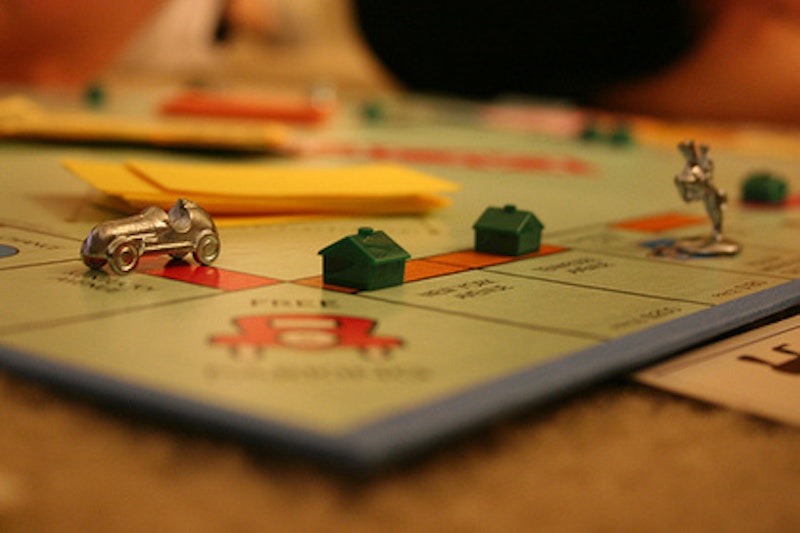 I was lying on the floor in my underwear, hungover and trying to keep cool by not moving, staring at the ceiling fan spinning above me.  “A vicious cycle,” I said aloud. It was Sunday. The sides of the propellers were covered in a thick sooty dust. Disgusting. Someone should clean that. I thought about eating a cheese doodle, there was a bag open next to me, left over from the previous night, but I felt too bored to chew.

I reviewed the evening’s events in my mind: The enthusiastic tap dancing back and forth on the coffee table in time to the marching band music while Felix absorbed some gin cocktails in preparation for an evening out. (I like a good fight song when getting ready for a party, and Sousa tunes of any kind, for quiet nights of drinking alone.) The neighbor knocking on the door later, during the post-party party, complaining it was 5 a.m. The scotch-tape fight with Felix, then the water balloons… the toast tennis, I recalled, picking a stale bit of crust from my hair.

Maybe I should stop drinking, I thought. The fan continued its silent wurrr above. I decided to go out. I peeled myself off the floor and wiped the debris that had gotten stuck to my back: some pot seeds, the burned paper edge of a roach, a bottle cap, and the cap of a purple magic marker from when we’d played the “Let’s-Throw-Magic-Markers-At-My-Ceiling-Fan” game, as well as some chads from the last party I threw, when we arranged a blind taste-vote on an assortment of jams made from my mother’s garden in Greece. I’d introduced the game because my mom keeps making and sending me more jam, and I don’t eat jam. I don’t like it. I gave the winner a jar of very fine apricot marmalade. There is rarely any actual way to win in most of the games that I make up. There is no object really, just the playing until we get bored, pass out, invent a new game, or break into spontaneous dancing. So I just chose the winner once everyone felt full. Bob seemed the most excited about the marmalade, so I gave it to him. Also, because he very sweetly put my knee on his lap and bandaged it after I roller skated out of the bathroom and fell down.

I applied the basic coverings to my body—some shorts, a shirt, and flip-flops, and headed out the door. On the street the heat was overwhelming, but then there was a slight breeze, and it was altogether much better than it had been upstairs. I am routinely surprised by the very same surprise. For hours, I’ll languish miserably in my apartment, before the idea that I might feel better if I just go outside even dawns on me. The walls of my apartment are some kind of psychic force field, I’m sure, because whenever I’m inside I find it impossible to imagine a life any other way. Guests agree with me. Some people end up staying over for days because of it. It’s very hard to leave.

My laziness might have something to do with it too. With very little stretch of the imagination, I can see myself getting stranded on a desert square inch. I wouldn’t even require a whole island. There could be a mini-mart within walking distance, but I’d say to anyone who was also stranded, “No, you go ahead without me. Leave me here to die.” I’d sooner resort to drawing straws and cannibalism than have to walk a few feet to explore. I get sort of fixed about things. Which is why a hot day seems like it’s going to last forever. As if there were never anything before, and there will never be anything after, so you might as well just stay very still.

A quick confession: I’m one of those people you see sitting in the hot car on the subway in August. You know when you board the train in the middle of the day during the worst part of summer, and the car is stiflingly hot, because the air conditioning is broken, and the compartment you’re in is empty but for a few peculiar individuals who sit by themselves sweating visibly, almost actively, looking as if they are concentrating solely on sweating? That’s me. I stay in the hot car. I’m not sure why. It just happens. I get on the train, and no matter what the conditions are and no matter how easy it might be to change my circumstances, I don’t. I just figure, that’s my lot, and have a seat, try to slow my breathing and make the best of it.

But now it was Sunday afternoon, and a summer day was all around me. The air was thick as pea soup, but still the streets were lively with pedestrians and cars and restaurant doors opening and closing, offering cool gusts when you walked by, and street vendors lining the sidewalks and ice cream trucks, and I already was feeling much better than before. I passed a blanket laid out with some fine merchandise on one of the sidewalks not far from my place. I’m accustomed to seeing the same roundup of vendors on my block, but this guy was new to the scene, so I stopped to get a closer look at his merchandise, when something caught my eye.

How To Make Sex Fun—a videocassette. I kneeled down to get a closer look. It was part three in the series How To Make Sex Fun, I read. This particular segment involved board games, I was startled to find, as turning over the box, I had braced myself for something considerably less, well, literal. I nodded in approval. The whole act of sex could benefit from a little more Battleship, a little bit more Sorry. I was curious about what the other segments offered as fun tips, and inquired with the store's proprietor, the guy lying next to the blanket, presumably. He offered only, "Oh yeah," and then lay back down.

I kept walking and the questions arranged themselves like this: Is sex fun? The makers of the video assume no, and offer a remedy for that via Jenga and/or Parker Brothers’ Monopoly, who knows.  It's an interesting question. I tend to agree that it is not fun, but more, I don't know, sexy. I figured, finally, that I could afford to learn a thing or two and decided to make the purchase. Why not shake up the old routine with a little bit of Scrabble? Add it to my sex How-To library I keep directly next to the bed for interested guests. I would put it to the left of Libido Theory and to the right of Disorders of Sexual Desire. Or should it go between to the Sex and Love Addicts Anonymous Hand Book or Living Sober (a book I read periodically from cover to cover on long nights of drinking alone)? Weighty questions. I puzzled over this as I also wondered if they did anything with Clue in the video. I was imagining all kinds of sexy fun in my future. How I’d really lighten the spirit next time I was at it again. “Look at what I’ve got!” I’d sing spiritedly, waving the videocassette and Chinese Checker board, as he’d apply a condom. This tape was going to turn my life around.

So, I stopped by the reclining man's blanket boutique on my way home, excited to make my very thoroughly considered purchase. But my heart sunk; the tape was nowhere to be found. Not next to the blow-up electric guitar, not beside the single baby diaper, not beneath the gently used Hallmark cards, nor under any pile of scrunchies and broken answering machines. I asked the man who was lying on his side, his head propped up on his hand more alert now than he was before. He’d been watching me search his stock. “Where is it?” I said. “You had a VHS tape earlier.”

“That’s a good little answering machine,” he answered, “Have the same one at home.”

“You sold it already?”

“I might have,” he said cryptically, as if he were one of the witches Macbeth meets on his return from the battlefield.  I was shocked. Who else would want it? It hadn’t occurred to me that someone else might see it and recognize its value. “This is terrible. I really wanted it,” I said petulantly, wanting it now even more than when I could still have it. “I needed it,” I added on, biting my fingernails. “Shoulda bought it when you had the chance,” he said, raising a filthy eyebrow. I was so angered by what seemed now my injudicious considerations, such imprudent, impotent thinking when I should have just snatched it up right away. That someone had taken action and purchased what I had set my heart on, while I, foolishly, had only thought about it, filled me with self-reproach, and finally a whole-body feeling of disappointment. I was heartbroken.

“Unsex me now!” I said loudly quoting Lady Macbeth, though the quote had no actual bearing on the situation at hand. Because, I thought, if you wait for an appropriate time to use these expressions one might never come up. And hadn’t I just learned a bitter lesson about waiting? “Phone card?” he offered me. “I’ll throw in this tooth pick, brand new, still in it’s wrapper,” he said, holding both together in one hand like ingredients meant for the cauldron. “No, thanks,” and I continued walking. The day was starting to close up, and it looked like rain was on the way. I’d had enough, I thought, to warrant a full afternoon, and would just go home now.

As my horror at losing the tape was gradually replaced with a feeling of resignation, and the familiar arias of defeat sang softly in my ear, I tried to project in my mind’s eye, the night ahead. I understood too well, you see, that someone, somewhere with the assistance of my tape, would most assuredly be having more fun than me. I rounded Bleecker St. for the second time that day and approached my building. I continued up to my apartment, dejected, ravaged again by fate's obvious proclivity to repeatedly step around me. Once inside, I proceeded to the kitchen and spun the cap off my jug 'o' gin. Night was nearly upon me, or cocktail hour was anyway. The apartment was still hot. It would always be hot. I proceeded immediately to my bedside library.

“This book does not offer a plan for recovery from alcoholism,” I read. I looked over at the darkened TV screen that was not doling out any useful “fun” bedroom advice, and took a slug from the bottle. I read on, nodding, skipping to my favorite chapter. “Sorrow is born of the hasty heart, an old saw goes. Other troubles, including an alcoholic bout, can be too.” The page was worn with use, the type blurry from spills. I put the book down momentarily to attend to my stereo in the next room. “Popular Marches” was still on the turntable. I turned the volume up high, stripped down to my underwear and went back to bed. The drums of routine pounded out the rhythms of Sousa.