Waxing Your Way To Hell

There's a great article to be written about the unfair societal predilection for "smooth" women, but Chloe Angyal is too busy feeling the residual burn. 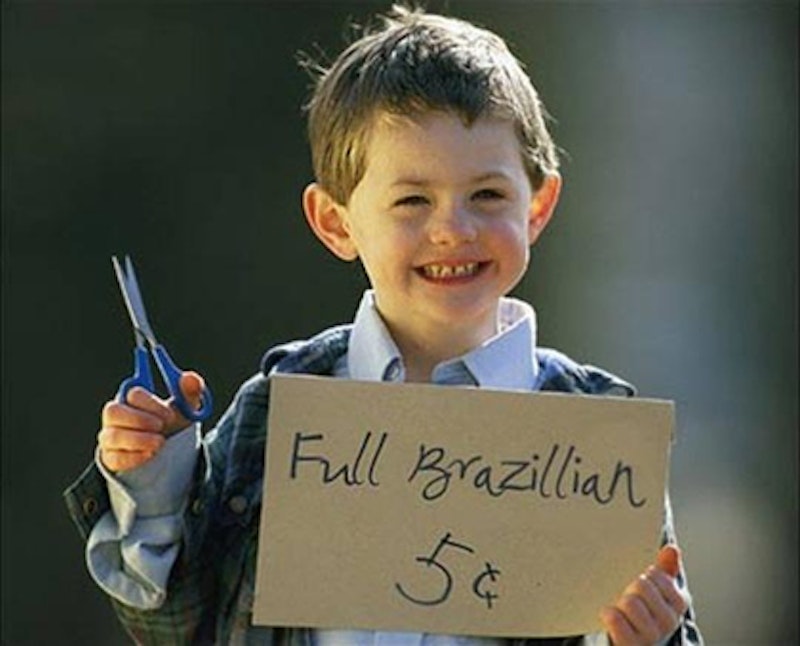 I am a terrible person.

Put me up there with human rights violators, toxic waste dumpers and baby seal clubbers, because I am going straight to hell. How do I know that I'm headed for Satan's clutches? My bikini waxer told me so.

This week I subjected myself to that cruel practice which, for reasons still incomprehensible, has become routine in many western cultures: I allowed a complete stranger complete access to my most private body parts, and then encouraged her inflict a whole lot of pain on them. And then, I actually paid her for it.

I know I can't expect a lot of sympathy. Since I willingly undertook this little exercise in masochism and had been through it before, I fully expect readers to ask what right I have to complain.

But this wasn't just any bikini wax. This was a bikini wax with a side of moral condemnation. This was the kind of bikini wax that not only leaves you silky smooth; it also allows you to walk out of the salon not knowing whether or not your next stop should be confession. In my case, it was.

You're probably wondering why my waxer thinks I'm such a terrible person. The answer: Because I had allowed too much time to elapse between this session and the last one, which, given the cost and discomfort of waxing, is not altogether surprising. But this woman seemed to think that my transgression was tantamount to blasphemy.

Without going into the gory details, I should explain that waiting a long time between waxing appointments means that when you finally get around to it, you're going to be in more pain than usual. Though apparently, if you're the kind of sinful, pestilent wretch who waits for that wax, you deserve every last gasp of pain.

When I entered the small waxing room and, as is custom, removed the bottom half of my clothes, exposing myself to a complete stranger (a big deal for me, but not for her, because I was probably the 15th half-naked person she'd seen that day), she tut-tutted at me, observing that it had evidently been longer than the expected six weeks since my last confession. Forgive me, woman dressed in a faux lab coat, for I have sinned.

But I lay silent and allowed her to inflict the kind of pain that would have been totally justified if it had any health benefit or any purpose at all, beyond vanity and blind adherence to passing beauty trends. But this is a practice with no medical or functional benefit. It's not like an annual dentist's appointment, which can hurt but also potentially prevent disease. It's not like an annual pelvic exam (oh, there go the only male readers I had left!), which is similarly exposing and very uncomfortable, but totally necessary. It was purely aesthetic, and I had chosen to put myself in the hands of this woman, this agent of pain who gave me a "you brought this on yourself" look every time I dared to even wrinkle my nose in discomfort.

"Who the hell do you think you are?" I wanted to ask her. And then I remembered. She's the woman putting a hot, adhesive substance near my very tender private parts. So maybe I shouldn't piss her off.  I gritted my teeth and said nothing, wondering why the hell I was there at all. There are lots of reasons to get a bikini wax, and believe me, I would like more than anything to rant about how there is virtually no equivalent social distaste for male body hair which sends men into salons by the hundreds as soon as beach season arrives. I could write pages and pages about the sadistic practices to which we all subject ourselves in our attempts to conform to absurd standards of beauty, and I would love to write to my congressman, suggesting that he pass a law regulating porn stars' pubic hair so that another entire generation of teenagers won't be socialized to think that the only sexy hoo-ha is a hairless hoo-ha. But I can't, because I really need to take a Tylenol.

Like I said, I expect no sympathy for the pain; I volunteered for that part. What I didn't volunteer for, and what I really didn't appreciate, was being made to feel like I was somehow a deficient woman for not having kept to someone else's depilation schedule. After all, it's my body, and I'll do what I want with it.