One says he's going to kill her. 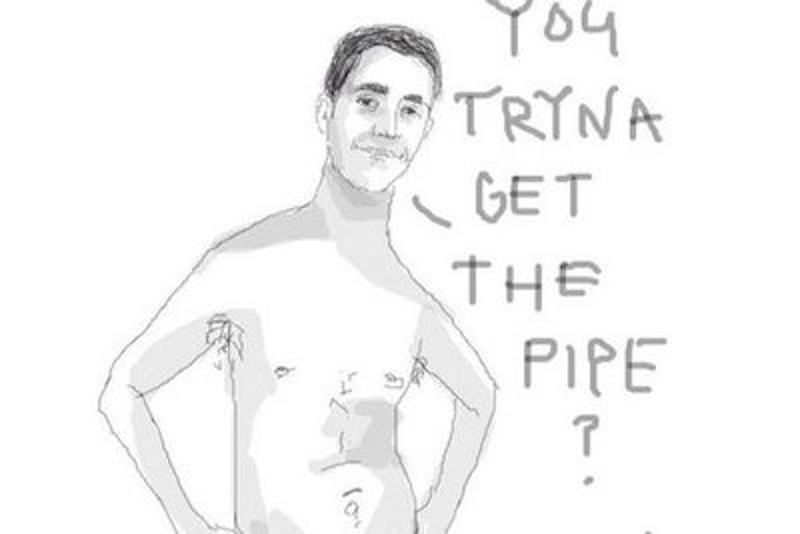 Anna Gensler has a problem. The 23-year-old Baltimore area artist uses the popular dating app Tinder, but often gets ridiculously inappropriate initial responses from some of her male "admirers"—the ones not into any preliminaries before getting right down to the nitty gritty. I'll spare you the gruesome details of their caddish, depraved responses, which are depressingly familiar in the casualness of their delivery to anyone who's spent time on the Internet, but if you require further evidence of how low some guys can go on the Internet, Gensler's artwork can be found here.

Not a passive sort inclined to absorbing abuse stoically, Gensler has devised a unique art project/humiliation method to shame the offenders and make a broader social statement. Based on their online photos (in which they are clothed), she draws unflattering nude pictures of them that include the words of one of their cruder overtures to her. She shares the "sad naked" style drawings with her unsuspecting, socially awkward online Lotharios, and then posts them online for all to see. Suddenly the hunter becomes the hunted, and few things are as interesting as that.

The men, as one might expect, do not react well to Gensler's creative counter-attacks. Predators rarely enjoy it when their intended prey cleverly turns the tables on them. With the sort of guy who gets a quick and unexpectedly humiliating response from someone (a woman!) he expects to dominate, you're going to see some raw anger brought to the surface. The coward's anger burns white hot when his intended victim knows exactly which buttons to push in retaliation.

For the final portion of her art project, Gensler posts on Instagram the responses her drawings elicit from the suddenly aggrieved men. A sample: "Wow you have nothing better to do with your life than being a complete bitch." What we have here is a total lack of self-awareness and misplaced outrage.

Because Gensler is running her social experiment on the Internet, of course she was threatened with violence. A man calling himself "John" online was not amused by Gensler's depiction of him, and responded, "OK you want to fuck with my age and destroy my life? Let's see what happen (sic). It is not hard to find where you live and work. I will find you and kill you." John demanded that Anna remove the offensive drawing. Though he provided a phony email address with his threat, Gensler was easily able to check the IP address of his real email. John lived within driving distance of her, and he had her info. She was scared.

The police are not really interested in pursuing such Internet death threats. The legal system has yet to catch up to cyber-bullying. Gensler was able to get a police detective involved only through the influence of her father, who called in a favor. The detective decided to go on her blog and warn John that he’d be immediately arrested unless his threats ceased. John's brazen response was another death threat and a "fuck you" to the cop, a perfect example of the disconnect from reality some people experience on the Internet, where even cops are fair game.

The Internet is a playground for the sociopaths of the world (ISIS loves it, of course), as it gives them easy and anonymous access to people, really freeing them to release the pathologies that the real world would make them pay for. Anna Gensler probably has known this all along, but what she's learning now—just as the Gamergate women did—is that you're pretty much on your own once you've hit a nerve with these sensitive bullies. Unless you threaten a cop online, you don't have too much to worry about in the current legal environment. You probably won't even have your Twitter account suspended. As we all know, an uncomfortably large number of people (as in "male" people) behave very poorly on the Internet. The medium draws out darkness, and the anonymity empowers them with a sense of invulnerability.  Some of these personalities often seem to be detached from reality, unable to grasp that their typed words of violence could have any real world consequences for themselves or others, while the more sociopathic types are bent on instilling fear, at the very least.

The law works at much more deliberate pace than technology, so it lags behind the new environment created by the Internet. There are criminal laws in about half of the states that prohibit the making of online threats, but the reality is that there is so much legal gray area that they’re rarely enforced. The core legal issue here revolves around whether violent speech on the Internet is merely "playacting," which would place it under the umbrella of free speech. The problem with the "playacting" vision of free speech is—to use Gensler's case as an example—that the harm was done as soon as John delivered his death threat. Gensler was afraid to sleep at home in the aftermath of what may or may not have been playacting, but she had no way of making this determination. The only sensible response, from her point of view, was to assume John was not playing around.

The current legal environment puts people in Gensler's position in a kind of limbo, but clarification is on its way. The Supreme Court heard the case of Elonis v. United States on December 1, 2014. The Court's decision, which will be the first major ruling on free speech on the Internet, will revolve around whether criminal conviction of threatening another person requires proof of subjective intent to threaten, or whether it’s enough to show that a reasonable person would regard the statement as threatening. Free speech is at the heart of the liberties that Americans treasure, but John's liberty to threaten Gensler's life came at the expense of her liberty to live her life without feeling endangered. I'm not really concerned with the loss of liberty the "Johns" of the world stand to suffer if the Supreme Court rules against them. They make everyone less free.