The appearance of a naked six-year-old on a magazine cover Down Under has rekindled the age-old debate about artistic nudity vs. pornography. 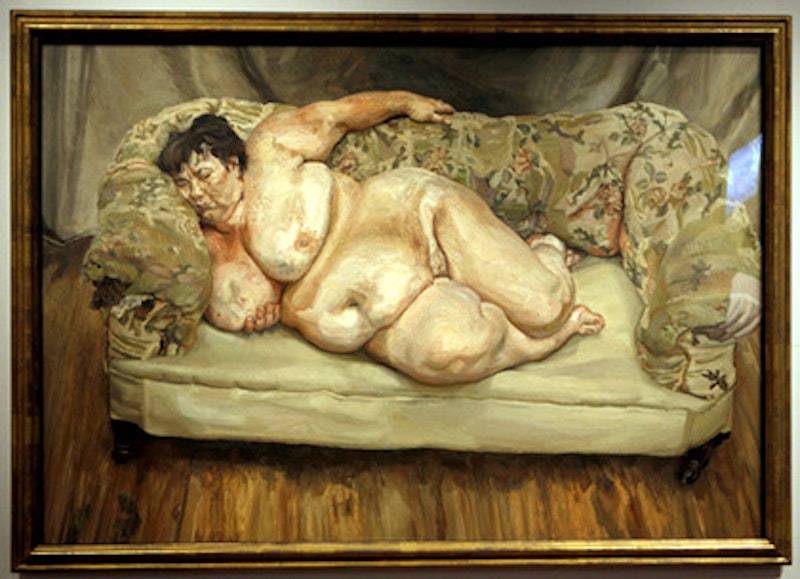 It's time for another round of my favorite game: "Imagine If This Happened in America"! I like to play it whenever something happens overseas that would make America's moral compass go completely haywire. I played a solid couple of rounds last year when Segolène Royale, an unmarried mother of four, nearly beat out Nicolas Sarkozy in the French presidential elections last year, having recently taken her long-term partner's job at the helm of France's Socialist Party. So many things about that situation made me ask, half gleefully and half sadly, "Can you imagine this ever happening in America?"

Recently, my homeland Australia has been providing some excellent fodder for the game: In late May, Australian authorities seized a number of artworks depicting naked children from the museum where their exhibit was planned. The artist, Bill Henson, was threatened with prosecution for child pornography for the images, which featured children younger than 12.

A month later, Art Monthly Australia magazine, in a statement against censorship, has put a naked six-year-old girl on the cover of its latest issue that, between the covers, is also one of their most nudity-heavy yet. Kevin Rudd, the Prime Minister, who opposed the original exhibition, has also come out against the magazine, stressing the protection of children from predation and exploitation. In response, the girl whose image appears on that magazine, now 11, says she is offended by the PM's remarks about the photograph of her.

You can imagine how things would play out if this happened in the United States: there would be vehement defense of First Amendment rights, followed by the pornography debate (again), then Helen Lovejoy-esque cries of "Somebody think of the children!" followed by numerous, probably naked protests from the art community—the more outrageous the better. And in true American fashion, the media would be there to monitor every salacious moment, because this situation is pure gold: a back-and-forth, he-said-she-said journalistic feeding frenzy which brings together some of the greatest components of sensationalist journalism: nudity, innocent children, and powerful men. Put these three things together, in any conceivable combination, and you have yourself a very eye-catching headline.

One of the proponents of the "art" point of view—that is, one of the people who thinks that the images in the exhibit and on the cover of the magazine have genuine artistic value—has publicly questioned why people are equating nudity with sexuality, especially in a six-year-old.

So my question is, does nudity equal sexuality?

There are certainly many situations in which nakedness doesn't immediately bring sex to mind: illness and medicine, for example, often require the body to be exposed, evoking not sexual thoughts but death and of suffering. The exception to this, historically speaking, seems to have been tuberculosis, or "consumption,” which was romanticized as the disease of bohemian artists. The reality, of course, is that no amount of oil painting or Puccini can make coughing up blood sexy, and there seem to be no modern day equivalent diseases that are believed to make the sufferer more beautiful. Today, the presence of illness or injury tends to take the sex out of nudity.

When we think about nudity in art, there are numerous situations in which either the experiences of painting, being painted, or viewing paintings are not sexual ones. Peter Paul Rubens, for example, painted most of his celebrated female nudes from male models, since it was not acceptable for women to pose nude at the time. Given that Rubens was married to a woman, we can assume that the experience of painting male nudes was not a sexual one for him, but rather, an exercise of genuine artistic value.

When I considered posing nude for a life drawing class one summer, the experience was not intended as a sexual one, but rather as an exercise in feeling comfortable in my own skin. To be at ease naked in a room full of strangers, I thought, as they focused on the parts of my body I had come to think of as flaws, would require real confidence and self-assurance, and would test just how far along I was on the long, hard road to loving my body. But my friends, family and boyfriend saw it otherwise: they were uncomfortable with the idea of other people seeing—no, studying—parts of me that were usually kept private, revealed only to a sexual partner or a bikini waxer.

I don't want to attempt to decide what constitutes art and what constitutes pornography, nor weigh in on whether censorship of potentially obscene art ought to be permitted in a democracy that assures free speech. The Henson scandal, if we must call it that, demonstrates the enormous power of the naked body. Free speech, artistic expression and happy naked five-year-olds on beaches everywhere find themselves viewed in a new light today as a result of the Henson affair, and it's all because of the naked human body and the way we look at it. We are the ones who decide which body parts are private and which are public, we decide who may go without a shirt in public when it gets hot and who may not, and we decide at what age a swimsuit becomes a necessity. The decisions our culture makes about where and when nudity is acceptable seem endless. As a result, the naked body wields enormous power over us: this week, the naked body of one six-year-old girl inspired artists, shocked and sickened communities and mobilized police, while down the road at the local swimming pool, other similarly undressed girls caused no such stir.