"Later that afternoon we rented Fatso with Dom DeLuise. I stroked his hair and fed him Devil Dogs while he cried next to me on the couch." Confessions of an admitted chubby-chaser. 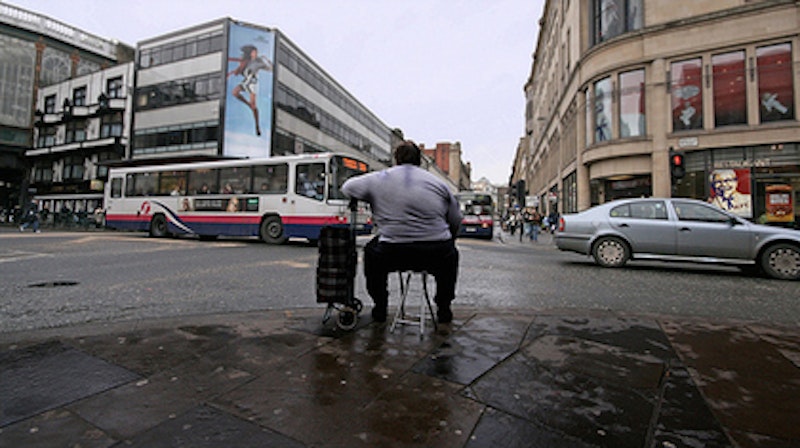 The ace of spades shows a naked woman perched on a wooden desk leaning on one arm and with the other she’s adjusting her reading glasses. There is a book next to her, Mallarme’s Poems, I imagine, though the title is out of focus, so I may just be projecting. Her feet are raised over her head and parted as if ready to embrace the sky. She might be described as “bookish.”

The other 51 cards expose a variety of female “types,” speaking to the richness of romantic or sexual fantasies in poker playing countries the world over. I started collecting vintage pornography a few years ago after I got bored of bottle caps and ice cream cone shaped pencil erasers. I have since accumulated a book of 3D nudes, The Collected Tijuana Bibles, a few sexual instruction manuals with illustrations (Total Sexual Fitness for Women!), two very bizarre fetish DVDs found in the basement of a methadone clinic, and a number of playing card sets ranging in theme from Ancient Greek Lovers to the more recently photographed deck out of which I pulled the ace of spades.

In the same way one identifies with the main characters in books and films, I look for reflections of myself in pornography. I’m not sure what “type” of woman I am, but I’ve always been willing to step into the closest fit, if I have to. This isn’t too far afield from the way I felt reading Cinderella as a kid. I didn’t really identify with her either. Let’s face it, we had very little in common. She was an underprivileged but good-natured blonde beauty left always to tend the hearth, while I was a sarcastic and gawky brunette enrolled in ballet lessons and accustomed to central heating. Yet the fact remained; I wanted to end up with a prince. And so, in my imagination I still cast myself in the role, despite my knowing I wasn’t at all right for the part.

I’ve been dating a new guy for a few weeks now. Glen describes himself as being into bookish women, but I think he just likes librarian-themed pornography. He told me, “You’re exactly my type,” and raised a serious eyebrow in my direction on our first date. We’d met in a bookstore, and so I assumed he was of the same bookish genus in which he’d categorized me. I was thus excited to play up that part of myself, imagining brilliant first date conversations debating the finer points of Henry James’ later works. I had even prepared an inappropriate joke about James’ testicular injuries so as to exhibit my wild side, which I planned to trot out over dessert if things went well.

As it turned out though, my prepping was in vain. Glen had only been passing through the bookstore that day to buy some coffee and had little or no appetite for the books themselves. Though this was a slight disappointment to me at first, it ultimately did little to lessen my attraction to him, as I noticed he had a remarkably hairy chest. A veritable beast he was, judging from what sprang ferociously from the top of his v-neck t-shirt. It was thrilling to imagine myself as the Boof to his Teen-Wolf. Unfulfilled childhood fantasies, perhaps. Nevertheless, “we were off to an auspicious beginning,” as Walt Frasier might say, as my school matronly sweater vests were quite equally doing the trick for him, too. It wasn’t long before we adopted the dual roles of man and woman at the start of a burgeoning romance.

It takes a bit of getting used to, new relationships. I kept on a little longer than I needed to with the bookish thing, though I might have caught his drift much sooner if I’d been more alert to his act and less concerned with maintaining my own. In the throes of my argument on Freud’s daydream theory, I all but ignored the provocation of his interruptions. Wondering aloud about size, color, and availability of tweed panties in nearby lingerie shops, he’d followed up by inviting me to ponder with him alternate locations for my elbow patches. I didn’t mind being his “type,” as he put it. I found it quite exciting, actually, that he managed to flatten my whole personality and character into a convenient fetish. I’ve always enjoyed being objectified. Called by pet diminutives such as, “baby,” or “doll.” It’s a rather common desire, I think.

Bringing one of his furry hands to my face the other night, I told him how much I really did love his knuckle curls. I waxed lovingly of how he reminded me of a beast out of the imagination of H.G. Wells. That I imagined before we ever met, he’d been hunted down amid great Scottish fog in a dark neglected wood, and once wrestled and trapped, was brought back to civilization in a cage, where upon an evil genius performed ungodly experiments upon him, injecting him with a mysterious serum that bestowed upon beast humanoid characteristics, transforming them physically and providing them with some but not all of the higher brain functions of modern man.  “And with the injection of this daily serum, Glen,” I said, excitedly, “Your body has miraculously transformed into the human shape which now sits before. Glen, your hands are a vestige of the savage beast within you!”

He asked me what “serum” meant and then, pulling back his arm and hiding it beneath the table, asked me to stop making fun of his hairy hands. I reluctantly let his paw go, and amused myself instead by timing his beard growth with a stop-watch I’d brought while we waited for our appetizers.

I don’t consider that I have a “type” of my own. My menagerie of ex-boyfriends is a marvel of variety. I’ve cast all different types to play the role of prince. While perhaps prone to capricious changes of mind, I’m rather open-minded. My friends, however, categorize these unconventional attractions as fetishes. Dating a 42-year-old man when I was still in college was evidence to them of an avuncular fetish. And that carnie I dated one summer out on Coney Island meant I had a toothless fetish. Or, for a while back in college, when I chose fat guys almost exclusively, they dubbed me chubby chaser.

One ex-boyfriend was so fat he could crush me beneath his weight. The first time we slept together he pulled me in close to him and said persuasively, “See, how I mold perfectly to your body? If I were thin, there would be all this space between us. I don’t want there to be any space between us.” I was touched by his romance and could genuinely appreciate his flab curving into the small of my back when we’d spoon. It was like being encased in bubble wrap. I felt very secure. Like a very delicate plate being carefully transported by mail.

I very quickly came to enjoy the look of him too. How he was planet-like, I’d think, as he’d exhale rings of marijuana smoke that seemed to wreathe him like Saturn. And there I was next to him in the kitchen, barefoot and so tiny in comparison, one of his moons. I began to think of physical attraction in a whole new—and literal—way. He was a large physical mass with its own quite powerful gravitational pull. Seen in this light it was quite natural that I’d fallen for or into him.

Phatso and I had fun all the time. No one had ever made me laugh as hard, and his penis puppet shows were the most skillful I’ve ever seen before or after. And I’ve seen a lot. I don’t know if this is something that most couples share, or if there is something unique to my personality that provokes men to invest their penises with stage names and perform impromptu puppet shows for me, but it happens regularly. Nearly all of my serious boyfriends have at one time or another erected such a presentation.

Phatso made a decent living as a comedian before he decided that winter he wanted to act. Thus it was all love between us until one day his agent told him he needed to either gain or lose weight in order to be “a type.” He would have to decide if he wanted to be a character actor, or else compete for leading man roles and amplify or reduce his weight respectively. Fatter sounded good to me, and I told him so.  “Roles are rolls,” I said, my hand drifting unconsciously toward his gut. My hand stuck helplessly against the front of his t-shirt like a 10-year-old on a Gravitron ride, before I gave him a squeeze and raised an eyebrow in the direction of the bedroom.

He didn’t see himself that way though, he said. He wanted to be a leading man, and proceeded to the kitchen to continue the conversation over soda and Hot Pockets. Although he wasn’t aware of it, he released my hand back into space like a bottle of Coca-Cola in a commercial from 1985. I followed after him through the apartment to the kitchen where he punched in numbers on the microwave, to talk it over.

Later that afternoon we rented Fatso with Dom DeLuise. I stroked his hair and fed him Devil Dogs while he cried next to me on the couch. He began his diet and strict exercise regimen the following day, and a month later he was muscular and thin. He took to eating soy and gluten and had his hair spiked at a salon. It was like his whole personality had disappeared with his chins. Suddenly he wasn’t fat and stupid, which had been a charming combination, but was just average looking and stupid, which was not attractive at all. It had been roughly a year since we’d started dating. "You look like an asshole," I said and left, feeling the man I loved had been pissed away in water weight.

After that, I found someone fatter. Really, really fat. His body was truly an extravagance. Breaking up is always hard and so perhaps I hoped to cushion a softer rebound for myself. My friends nicknamed Phatso’s sequel, “Type 2,” short for “Type 2 Diabetes,” they said. More romantically, I nicknamed my new guy “The Love Barge.” And whether by his side or taken up into the berth of his great arms, like a dinghy attached to a monstrous ship, I felt so marvelously small.

We’d been flirting with each other all night at a bar where all our friends were regulars, when he kissed me for the first time. It was right after I accidentally vomited up a shot of Jagermeister instead of flashing a bewitching smile like I’d meant to. (I found out later he had a fetish for young alcoholics.) Quickly covering my shame with just a few lady-like fingers pressed across my mouth, I was so embarrassed. I ran like Cinderella at midnight. And he, obese prince that he was, panted after me down the steps where I’d continued running toward the men’s urinal to let my upchuck burst into full flower. It was all very romantic. I had just enough time to rinse my mouth out in the sink before, wheezing at my back, Type 2 caught up to me. Spinning me around, he gave me a look like the Jack of hearts, and then he kissed me.