Misogyny Against Men is Deadly Serious

Taking on attributes of femininity is seen as frivolous, artificial, and disgusting. 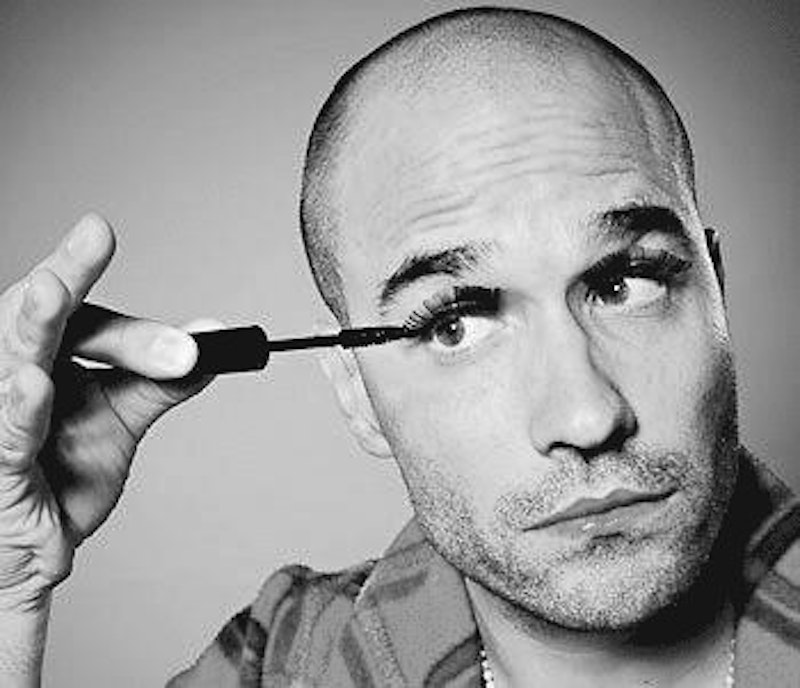 Earlier this month, Chris Martin, a 14-year-old eighth-grader, wore black eyeliner, eye shadow and lipstick to his last day of school, along with an anarchy t-shirt. He was told that his face was in violation of the school's dress code—even though the school does not ban girls from wearing makeup. According to Chris' mother, Katelynn Martin, the principal, Claud Effiom, "expressed his own belief that boys wearing makeup is ridiculous, unnecessary, and distracting."

A few weeks ago I wrote about the ways in which men can experience sexism because of traditional stereotypes and gender roles. That seems to be in part what is happening here. As the ACLU says, “Applying a different rule to Chris because he is male constitutes sex discrimination in violation of the United States Constitution."

I'd argue, though, that the discrimination against Martin shows not only how men can be victims of sexism, but also misogyny. At first, this may appear contradictory. Misogyny is the hatred of women, not men. How can hating women result in sexism directed against men?

The answer is that misogyny doesn't just mean hatred of women. It means hatred of everything having to do with women. Or, as Julia Serano puts it in her 2009 book Whipping Girl, misogyny is the "tendency to dismiss and deride femaleness and femininity."

Since women are typically associated with femaleness and femininity, they bear the brunt of misogyny. But men who express femininity can also be targets. This appears to be what happened to Martin. The principal dismissed and derided his makeup because it was "ridiculous, unnecessary, and distracting"—standard misogynist tropes used typically to dismiss and deride women.

But those misogynist tropes are also, and almost as frequently, used to dismiss and deride men. Misogyny can structure both male and female experience. In some ways, in fact, as Martin demonstrates, misogyny can be even more restrictive for men than for women. Women in our culture can wear jeans or dresses, pants or skirts, makeup or no makeup, generally without comment or ridicule. Men's options, in this regard, are more limited. Similarly, Serano point out, female-to-male transsexuals are embraced by the women's movement, while male-to-female transsexuals are stigmatized and often deliberately excluded. As Serano argues, women who take on attributes of masculinity are lauded; men who take on attributes of femininity are seen as frivolous, artificial, and disgusting. And this is not, or not only, because they violate gender roles, but specifically because femininity is seen as frivolous, artificial and disgusting. It is not just homophobia or transphobia that makes men who wear makeup a target—it’s misogyny.

One of the standard devices of misogyny is to argue that femininity is trivial; as a result, misogyny against men can seem trivial. Who cares, after all, if men can't wear makeup or dresses? Aren't there other more important problems?

But misogyny against men is deadly serious. One of the brutalizing characteristics of discrimination is its pettiness; the way it legalistically limits what you wear, which water fountain you drink at; what festival you go to. Its systematic smallness is how it makes you small. Which isn't to say that misogyny against men is always small. On the contrary, it also has its moments of horrific, genocidal brutality. This is made painfully clear in Will Storr's heartbreaking 2011 discussion of the widespread rape of men in wartime—and of the way that that rape is systematically ignored by just about everyone.

And why is it covered up? Here is Storr's description of the plight of a man raped in Uganda.

Today, despite his hospital treatment, Jean Paul still bleeds when he walks. Like many victims, the wounds are such that he's supposed to restrict his diet to soft foods such as bananas, which are expensive, and Jean Paul can only afford maize and millet. His brother keeps asking what's wrong with him. "I don't want to tell him," says Jean Paul. "I fear he will say: 'Now, my brother is not a man.'"

It is for this reason that both perpetrator and victim enter a conspiracy of silence and why male survivors often find, once their story is discovered, that they lose the support and comfort of those around them.

The reason men are unwilling to come forward, and the reason that others treat them with contempt, is that being raped makes them feminine—and femininity is despised. Rape victims become victims, not only of rape, but of misogyny. "In the patriarchal societies found in many developing countries, gender roles are strictly defined," Storr says. But his essay makes it clear that it's not just developing countries where gender roles can be strictly defined. The humanitarian community also ignores the rape of men; Storr even discusses one incident where a donor refused to provide funds unless they were targeted specifically to women. According to Maite Vermuelen, "only 3% of [NGOs] mention men in their literature, and a quarter explicitly denies that sexual violence against men is a serious problem."

Women who are raped are also stigmatized, not least because they’re seen as hyper-feminized, sexual, trivial and weak. The contempt rape victims experience is born of misogyny, and that contempt is visited on men as well as women. Sometimes, indeed, it is visited even more virulently upon men, because femininity in them is seen as especially shameful or repulsive.

And there is always going to be some femininity in any man. If you don't wear makeup, you may walk like a girl, or talk like a girl, or like something that girls like, or like girls too much, or not like girls enough. As long as misogyny permeates our culture, femininity will be a threat to hold over men. Which means that as long as there is misogyny, men, as well as women, are not free.