The Bechdel Test and Emily Dickinson 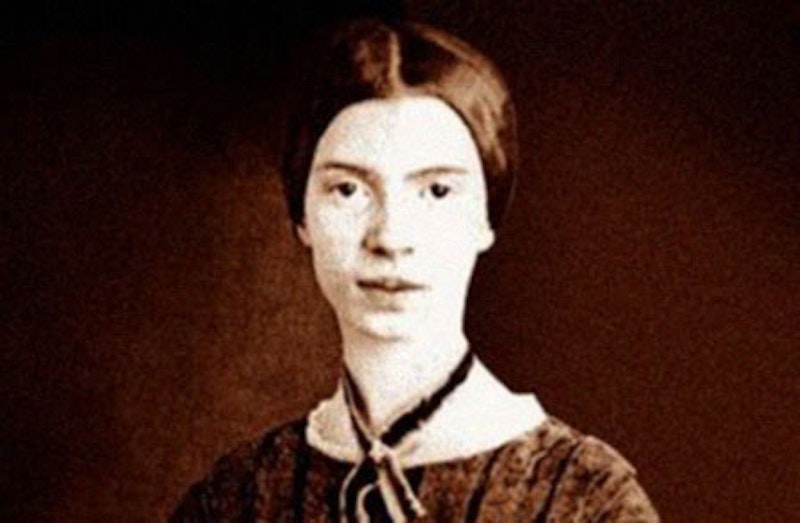 Over at the Daily Dish, Andrew Sullivan was having a debate last week on the Bechdel Test. For those who've never heard of it, the Bechdel Test is a means of identifying gender bias in film. It was first proposed in 1985 by Alison Bechdel in her comic strip Dykes to Watch Out For. To pass the test, a film has to have (1) at least two women, (2) who talk to each other, (3) about something other than a man.

That doesn't seem like such a difficult barrier, and yet lots of films fail it, from the original Star Wars trilogy to The Lord of the Rings Trilogy to The Social Network.

One of the big reasons that these films fail is, obviously, that they have male protagonists. It's true that there are major female characters as well (Princess Leia, Galadriel, etc.), but they aren't the main characters (Frodo, Luke Skywalker, etc.) You could argue, then, that the Bechdel Test is just another way of complaining about the lack of female protagonists, which is precisely what one of Sullivan's commenters says:

"...the Bechdel Test is total and complete bullshit. I’m a Hollywood screenwriter, so let me drop a little knowledge on this one. The only way a film is going to pass the Bechdel Test is if the protagonist is female, or it’s an ensemble cast with a bunch of different storylines. Anything else is bad screenwriting. Here’s why: Movies do not suffer digressions well. To be good, they have to stay on their main storyline. This is one of the structural realities that separates them from novels."

This seems fairly unimaginative—you couldn't have two female scientists talking about how to kill the zombies? It also ignores the fact that many films with male protagonists, like Iron Man, do in fact pass the Bechdel Test. More importantly, though, flattening the Bechdel Test into a discussion of female protagonists misses the point. That goal of the test is, specifically, to move the discussion of women in film from one of female representation to one of female relationships.

Joanna Russ explains why this matters in her 1983 essay "Anomalousness" (excerpted in the anthology Feminisms from Russ' book How to Suppress Women's Writing.) In the piece, Russ analyzes a number of major literary anthologies from her time and earlier, and discovers that they all include roughly 5 to 7 percent women, though not the same five to seven percent. Some include Elizabeth Barrett Browning, some don't; some include Aphra Behn; some don't. The faces change, but the percentage stays the same, almost like there's a quota with an upper limit.

For Russ, the limited number of women represented is a problem in itself. But it is also, she argues, a problem because the small numbers makes women anomalous. Moreover, having only five to seven percent women erases the connections between women writers, and therefore the tradition of women's writing itself.

For instance, Emily Dickinson—the one truly, absolutely, indisputably, everybody-agrees-yes-she-is canonical female poet in the English language—is often seen as isolated, weird, and sui generis. Russ quotes R.P. Blackmur explaining condescendingly that Dickinson was "neither a professional poet nor an amateur; she was a private poet who wrote indefatigably as other women cook or knit." This, as Russ says, starts to look like an extremely fatuous thing to say when Dickinson appears to have memorized huge honking swaths of Elizabeth Barrett Browning's Aurora Leigh, and to have referred frequently to Browning as a model, a guide, and a mentor. Dickinson didn't write poetry as other women cook; she wrote poetry as other women (and in particular Elizabeth Barrett Browning) write poetry. She talked to other women; she listened to other women. She wasn't an aberration, and she wasn't alone.

Not that the test is perfect or tells you everything you need to know about a movie. But it is a way to get at the fact that, say, Run Lola Run (which doesn't pass) or Salt (which barely does) can have female protagonists and still present a view of women as isolated and anomalous. If women only matter when they talk to or about men, then women in themselves don't matter, whether they're super-spies or poets. The Bechdel Test is a clever, rule of thumb way to understand that tokenism is not equality.