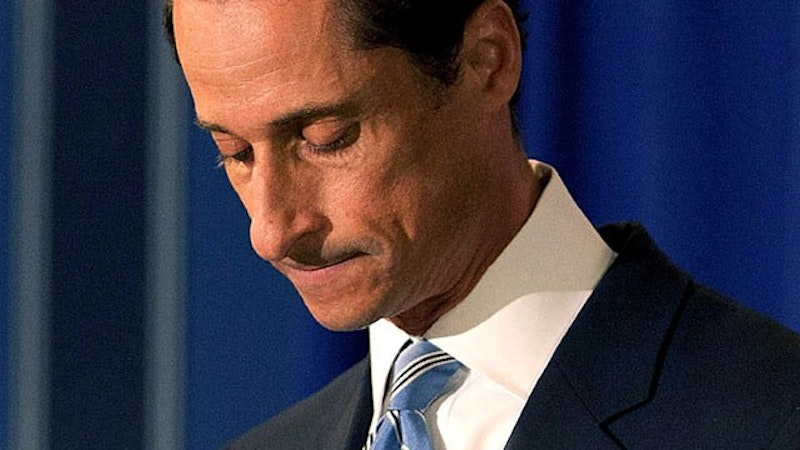 Anthony Weiner is gone, and most of us don’t care. It was fun to talk about his thing, but now we must move on to other scandals. So long and thanks for all the tweets.

There are some who mourn, though, at least briefly. In particular, Andrew Sullivan has been profuse in his sympathy. For Sullivan, Weiner is the victim here—of rank partisanship second, and of that hideous scourge we call testosterone poisoning first and foremost. As Sullivan rhapsodizes:

...especially when young, surging testosterone offers unparalleled sexual excitement, constant no-strings-attached adventure, risk, ecstasy, thrills, passion and a form of psychological escape from the ordeal of consciousness that is, to my mind, unmatched. I suspect that's especially true for men, gay and straight, under stress or in the public eye constantly. To be something else for a while, to be purely an id, must be a particularly powerful relief for those required to be civilization's super-egos.
In a more saddened mode, Sullivan adds:

...what ended his career was the fact that he had been humiliated by the demands of his own considerable cock. That "too big to fail" organ beat the other one in his cranium. In men, that happens sometimes, in case you haven't noticed. In men fueled by testosterone and power—and just look at him, he's a strutting rooster of hormones—the combination can be overwhelming. I feel pity not disgust.

Sullivan’s point is that Weiner’s actions were biologically determined by the fact that he’s a man. Male sexuality, hormone-fueled, demands release. Weiner was just, as Sullivan says, “texting while male.” It’s a guy thing.

This is wearisomely familiar. It’s the language of women’s magazines and men’s magazines, the empty-headed, tell-it-like-it-is wisdom of self-help books. Indeed this article on Weiner seems like it desperately wants to be in some kind of understand-your-man relationship advice column.

We didn’t ask for it, but we men are programmed to be overtly sexual. Masking it in any way is somewhat unnatural. We control it, to the extent we can, by having an excellent sex life with our spouse (which rarely happens) and by daily mindfulness. But it’s sort of like being an ex-smoker asked to never smoke another cigarette again. You can follow strategies to reduce the likelihood of smoking, but the craving will always be there.
Yes women, it’s true. Most of us men have an almost irresistible craving to send pictures of our cocks across the Internet. I am barely restraining myself from taking such a photo right now for this very article. And yet, somehow, I have resisted. How did I do that? Perhaps it’s because I am not a real man like Anthony Weiner; maybe he just has more hormones to deal with. Maybe his libido is so tumescent that it is almost, say, half as potent as that of Janis Joplin.

Or perhaps that’s unfair. Women politicians, after all, don’t usually get caught up in sex scandals.  As The New York Times points out, though, this is not because they are sexless, but because woman politicians have to be better than their peers to even be in the room. There are, obviously, far more male politicians than female ones, and women still have to prove themselves in ways men don’t. From the Times story:

Celinda Lake, a Democratic strategist, says female politicians are punished more harshly than men for misbehavior. “When voters find out men have ethics and honesty issues, they say, ‘Well, I expected that,’" Ms. Lake said. “When they find out it’s a woman, they say, ‘I thought she was better than that.’"
In short, it’s not biology… it’s stupid assertions about biology by pundits like Andrew Sullivan. It’s not testosterone poisoning; it’s biological determinism poisoning. Everybody has decided that men are less culpable for their sexuality than women are, and, with that rule established, men behave as if they’re less culpable for their sexuality than women are. Someone like Joe Klein will even heap disdain upon his own gender, declaring “As I get older, and farther removed from my own hormone-addled salad days, I find maleness—the blind, bullish insensitivity of it—to be as much a disease as a gender.” It doesn’t seem to occur to him that blaming that blind, bullish insensitivity on hormones is a way to excuse and perpetuate it.

I don’t really think that Weiner committed a great sin, and his resignation is largely a matter of indifference to me. But sin or not, sending lewd pictures over social media is not a biological reflex. It’s something you learn, perhaps in part by being told over and over that you can’t help yourself.

—Noah Berlatsky can also be found at hoodedutilitarian.com