Get Off Your High Horse

The Weiner Scandal has brought out the scared teenager in all of us. 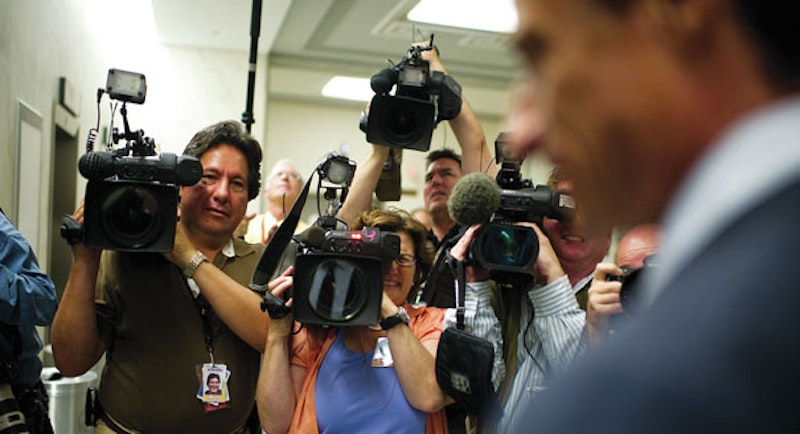 The most fascinating aspect of the latest installment in the continuing series Men Behaving Badly is not Anthony’s Weiner, but the utterly bland circumstances from which the pictures have emerged. The unlucky New York Congressman has received a true media bukkake in the last fortnight, admittedly made worse by his initial and pathetically transparent attempt at a cover-up. But what strikes me is the dissonance between this story’s thin gruel and the media’s undignified exuberance. I mean, David Vitter, Eliot Spitzer, there were prostitutes. Larry Craig, Jim McGreevey, Mark Foley and Ted Haggard, there was the whole gay thing. At least Mark Sanford, Dominique Strauss-Kahn, and Tiger Woods all had a unique twist (passionately oblivious romance, volcanic sexual violence, and hilariously arrogant text messages). The Oscar Meyer Weiner spectacle is just boring, and it’s clear we’ve reached a saturation point for public sex scandals—at this point, even a Congressman’s boxer-restricted erection elicits no more than a cynical chortle from most.

People claim they’re sick of the political discourse clogged with irrelevant garbage, but it’s everyone’s fault for participating in these grotesque public shaming ceremonies. Weiner’s constituents, the people who know him best, don’t want him to resign, but he undoubtedly will because, as President Obama said this week, it’s created an unproductive distraction for the Democratic Party. But why is this a big distraction? Why do we—and alleged journalists—need to publicly destroy people who make these kinds of mistakes? How is Weiner’s sex life relevant at all to his ability to do his job? Besides, what Weiner did is just not that strange, and I challenge every male to remember their own secret indiscretions, because fact is, being horny is not a crime, and nothing to be ashamed of.

Weiner ought to resign, for his own peace of mind, but the completely ridiculous media circus this has created makes Americans look like children. We must look deeply confused to the rest of the world: our culture is drenched in sexual suggestion and innuendo, and we have a supposedly liberal attitude on sex, yet we still feel such shame for doing and feeling things that are as normal as pissing and shitting. Everyone’s horny, and our sexuality is uncontrollable: the United States is in the midst of a national puberty, confused and excited but scared by the prospect of sexual freedom. It’s weird and sad.

Weiner didn’t do anything illegal, yet he’s castigated as a perv for behavior that many of his detractors are guilty of. A person’s responsibility is to respect the law and establish consent—otherwise, our sexual practices and those of public figures are irrelevant and none of anyone else’s business.