GRINDR is a smartphone app thats taken covert hook ups to another level, but there's plenty of history behind it. 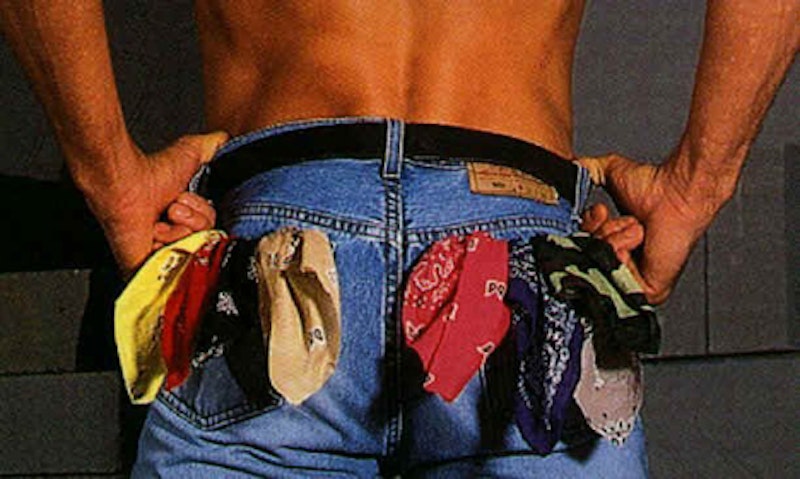 There’s a magical Smartphone app floating around called GRINDR, the Gay Guy Finder, and it’s basically GPS for gay dudes. Leave it to a queer to invent a program that instantly pinpoints all the gays surrounding you wherever you go. Here’s how you play: upload a sexy picture (no peen shots), create a brief profile and—boom—you’re set. Just click the app open and every gay in the vicinity lights up green on your screen—a grid of ass to be tapped. See somebody you like? Chat them up right through the app!

I downloaded GRINDR because I wanted to see what all the fuss was about. Plus, I’m kind of addicted to getting new messages. I love getting text messages, emails, Facebook messages, G-chats, whatever. When I log in and there’s a new message I’m like “yay!” and it like validates me in some strange way.   Through my GRINDR experiment, I’ve learned that basically everybody is on it, including Senator Fill-in-the-Blank. Just last week I went to a concert by my favorite jazz band, and there was a gay dude sitting there, beaming gays up on his GRINDR. Mmmmhhhhhmmm. Gays even get on GRINDR while at a gay bar, which I suppose makes meeting somebody very efficient.

I have to admit that GRINDR is a lot of fun. The app traces your moves, so as you float from Brooklyn to Soho to Chicago to Los Angeles, or from your Organic Chemistry summer class at UC Berkeley to your part-time job over at Bath and Body Works, GRINDR knows exactly where you are—and so do all the other gay dudes within 4000 feet of you. But that’s almost definitely the scariest thing about GRINDR. I’ve been living in a dorm on the Northwestern University campus for the past week and yesterday when I opened up my GRINDR it told me there was a dude 125 feet away from me. So, that was scary.

Gays have long created covert, interesting ways to solicit sex under the radar.  A bunch of horny gay dudes came up with the system of wearing color-coded scarves to indicate what kind of sex you like. So if you wore a black bandana in your LEFT pocket, you were a heavy S&M top; but worn on the right, you were an S&M bottom. But if you wore a BLUE scarf on your right, you were a copsucker (READ: not cocksucker, although that too). And if you wore a mustard-colored scarf on your LEFT, you possess the mythical eight-inch peen, but worn on the right you SEEK OUT that kind of dong.

Then came the hotlines, where you could call one of those numbers listed way back in the Village Voice, or whatever your city’s alt-weekly was called, and scores of gays posted ads about what they wanted. You’d call the number and leave a message with the dude, only going by the sound of his voice—which, as we all know, can sound sexier than the person actually is. So that’s dangerous. Enter Gay.com, Manhunt, and other such online gay networking sites where you could post a profile pic and actually tell your potential partners whether you were a copsucker or an S&M top without needing the appropriate scarf, successfully avoiding mix ups where you meant to wear the scarf that indicated “vanilla bottom” when actually you wore the one which said you want to get fisted—which, ouch.

GRINDR’s evolution from this long line of secret gay communication for sex is the most fascinating aspect. Just think: the color-coded scarf or the 1-800 number becomes a GPS system, which automatically outs every gay in your immediate area. It’s a brilliant innovation, or maybe evolution, but like all social media, it takes the fun away from the accidental meeting, the happenstance, that thing where you had a big crush on the boy at the coffee shop and didn’t know if he was gay or not, but the ambiguity really turned you on. Now you can pop open your GRINDR and see that not only is he listed, but also he’s just 25 feet away!