What's so scary about a fey gay? 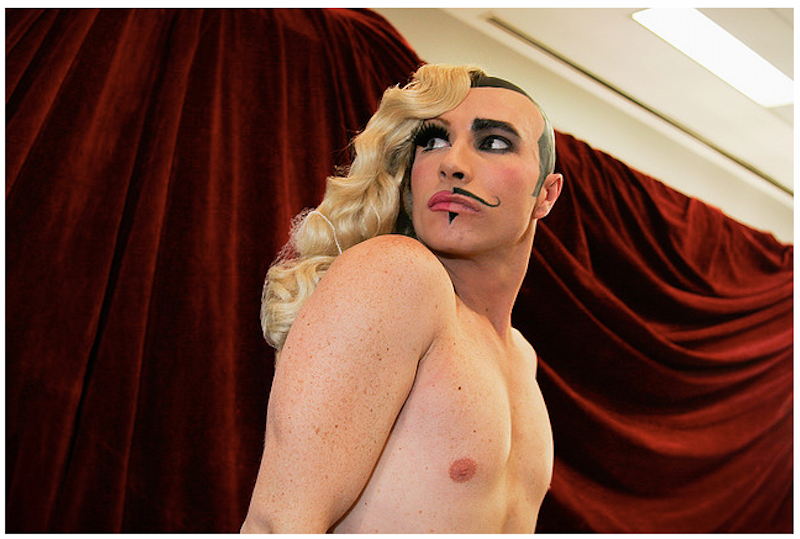 Two weeks ago I was at a party in Washington, D.C., floating through the crowd, when out of nowhere somebody spat on me—as in, they literally launched spit from their mouth onto my head. What the fuck? I was wearing my favorite gold sequin jacket at the time, and it’s a real statement piece, so I guess whoever did the spitting wasn’t keen on being near black gay dudes in sequin jackets.   You know, I’ve been called fag, fruit and punk, and even my dad used to call me a sissy. He used to make me get up early to do manly, Tim-the-tool-man-Taylor-y things around the house, which was the last thing I wanted to do on a Saturday, especially since I couldn’t think of an appropriate outfit for yard work. But this getting spit on business is a brand new level of homophobia, one I’d never experienced until now. My friend Marcel, who was with me at the time, was even angrier than I was. He was ready to kick some ass. So I was just like, chill out, bro.

The most important thing about homophobia, I’ve learned, is not necessarily to say something back. You will want to, but resist—unless you also happen to be carrying a sniper rifle, which would really make the process a lot easier. The real key is to keep doing exactly whatever you did to provoke the homophobe in the first place. So if the spitter didn’t like my sequin jacket, he is really going to freak out when he sees me in my pink sequin Hello Kitty eye patch and matching headpiece.

But why is it that an object as stupid as a sequin jacket, a cheap $5 flourish I got from H&M—why can this thing make another person so angry to the point of spitting? How is my presence so offensive that it actually brought you to spit on me? It’s okay to disagree and, anyway, I didn’t ask for approval, TYVM. Spit carries disease, and in the act of spitting my spitter was simultaneously saying that my lifestyle as a gay who likes to wear vivid and imaginative things is wrong, and that I am something of a disease to society for being so outside of the box.   Yeah, well fuck you, too!

The spitting incident happened around the same time as CNN broke a news story on “The Sissy Boy Experiment,” a government funded therapy treatment program that promised worried parents that it could knock the sissy out of their sons. The program gathered effeminate boys at a wood paneled, testosterone-filled laboratory, far, far away from Barbie dolls, couture, and the color pink, and it promised to “butch them up” as one participant put it.  But what’s wrong with an effeminate guy? There are plenty of effeminate—or effete—chick-loving guys out there. But why do people have such a problem with fey boys, which could be called something like effemophobia, fear of faggots? Just for the record, I think fey boys are really hot, so before any of you feys out there ship yourselves off to this bogus Football-Beer-Pong-and-Chicks Camp, give me a call.

As with any anti-gay therapy, the results of de-feminization are dangerous and can result in severe depression, anxiety, and even suicide. In the wake of the recent gay suicides, when will people realize that attempts to “correct” one’s natural gender performance or natural sexual preference—is absolutely contributing to the deaths of gay kids everywhere? How do you sleep at night, Westboro Baptist Church?   And yet, effemophobia doesn’t just come from homophobes. Gay dudes are guilty of it, too. Indeed, even and especially in the gay community, there’s a strange vogue of effemophobia, a rejection of flamboyance on the one hand, and a dis-identification with the idea of gays as lispy, sequin-coated hairdressers on the other. Gay men will do almost anything to appear as normal, masculine, and undetected as possible Go to a gay club anywhere in America and you will see more performances of masculinity than you can shake a dick at. People with gay sex profiles roar over and over about how disinterested they are in “fashion divas.” Okay, so let’s get something straight. “Fashion Divas” sounds like a tacky clothing store in a strip mall in New Jersey, filled with loud colors, hair spray, and animal print.

But, really, what are gay men and homophobes afraid of? What trouble does the fey gay cause? And feminists (hi!), how do you feel about this obsession with preserving masculinity at all costs?

Besides, the “Fey Gay” is going to be one of the hottest Halloween costumes out there come fall.