Hot Alien Sex, or Would You Fuck a V?

On the intense doability of extraterrestrials. 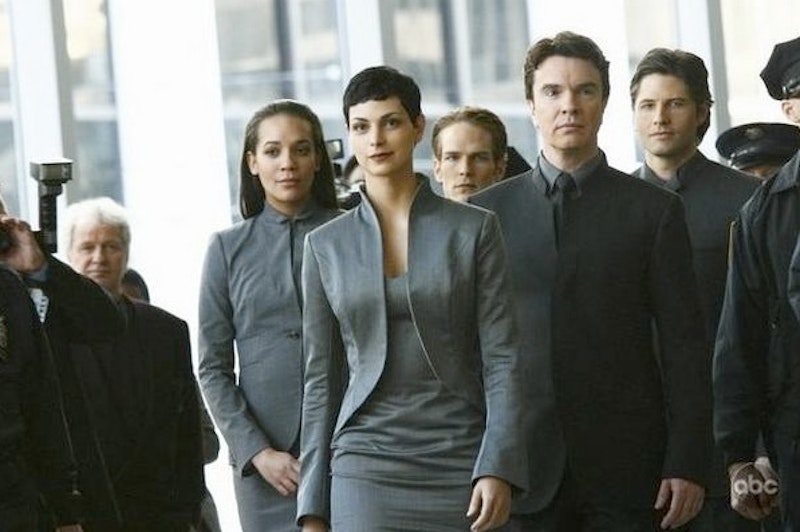 Since the start of Lost's final season a few months ago, ABC has been doing just about anything it can to hook Lost fans on Lost replacement shows. Both Flash Forward and V feature Lost actors (Dominic Monaghan on Flash Forward, and Elizabeth Mitchell on V), as well as Lost-style storylines and dramatic hooks, e.g. answer one question by raising four more. I've been watching both of these shows because I really have nothing better to do, and since V is currently on Tuesdays at 10, right after Lost, it'll probably turn into my fallback Tuesday night show. Currently I watch Lost with six or seven friends and we all take it way too seriously, get drunk, order pizza, and—after the episode's over, of course, because there is no talking allowed during the episode—we discuss various Lost theories for about an hour or so. In four episodes, when Lost is over, I guess we'll just transition to V, which I’m not really happy about but what can you do?

Anyway, the whole point here is to pose the following V-inspired question, though I guess I should explain the basic premise of V first, which is that aliens have come to earth and they're promising to help us by sharing advanced alien technology and what-not, but we quickly learn that they have another agenda altogether (something about turning us into slaves or using us for Soylent Green-type food or something). Because the Vs look just like us, I guess we're quicker to trust them, but in an early episode we find out they are in fact weird looking lizard things (aren't they always?) made up to look like humans—an "Edgar suit," if you will.

So, the question is this: 1) Let’s assume, like most everyone on V, you don’t know that the aliens are anything other than really attractive looking humans from another planet. Would you fuck a V? And 2) Would finding out that the Vs are in fact weird looking lizard things made up to look like humans excite you more?

Surely this is not altogether a new question: Captain Kirk made passionate Kirk-love to all sorts of alien women (and had a weird relationship with Spock to boot); Ziggy Stardust was, if not hyper-sexualized than at least hyper-glamorized, which is roughly the same thing; the Japanese have a weird fetish obsession with tentacle porn; and there’s probably a fair number of men who’ve jerked it to Natasha Henstridge in Species (though certainly not this writer). There’s also that Tahnee Welch pool scene in Cocoon that isn’t exactly sexual but does have the classic line, “I hope you’re not gonna take your skin off, cause I really like skin on a woman.”

More importantly, a sub-question that occurred to me later probably focuses too much on bizarre sexual politics for a primetime drama like V, or for most Hollywood sci-fi movies for that matter.

Wouldn’t the sudden arrival of really attractive looking human aliens cause most of us to feel completely inadequate and obsess about the aliens’ likely sexual superiority? Surely, if they’ve figured out how to build huge space ships and travel to other planets they’ve also figured out some positions that aren’t in the Kama Sutra or have some kind of amazing alien orgasm injection gel. And, because of this collective sexual Inferiority Complex, wouldn’t there be random acts of violence akin to the kind white men committed against black men because of similar fears? Or, in the words of Dan Savage: “Whitey fears big black dick, rampaging Mandingos, white women coming down with jungle fever and getting their chifforobes busted up, etc.”