What to do when we're presented with the nasty sexual habits of our superheroes. 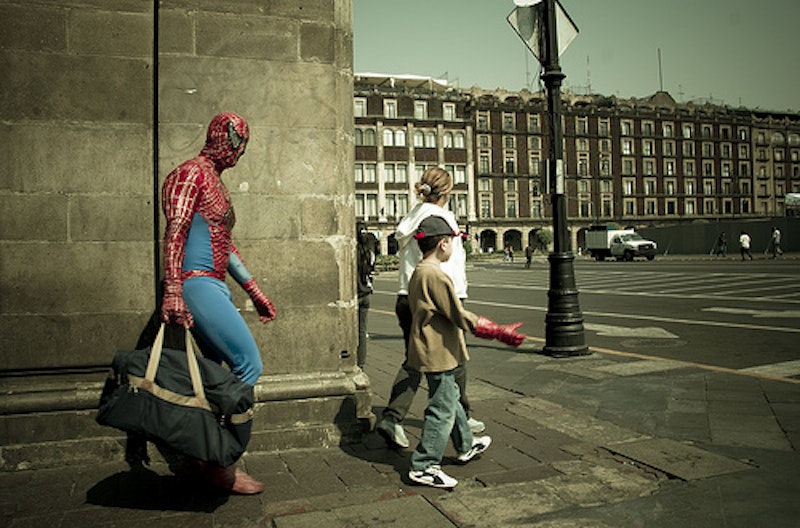 I love the Sunday New York Times so much that when I pick it up, still wearing my pj’s and not caring if neighbors see me in my bedraggled state, I would lick it—if it wouldn't leave a newsprint tattoo on my tongue. I learn something every week. This time around, I was surprised to discover something truly mind-blowing within an article in the “Sunday Styles” section headlined "Gay Parties in New York Attract the Superhero Crowd."

What surprised me? Was it that gay men in New York are dressing up in second-skin superhero outfits for comic fan underworld "Skin Tight USA" parties and making out with each other? No. Was it that there is an undercurrent of belief in the gay community that Batman and Robin are and always have been gay? No. (Who on the green earth ever thought they were straight?) My surprise wasn't even found in the apparently well-known fact that Batwoman is a lesbian. (Though I really can't believe I missed this memo—everyone knows Catwoman invented lesbianism, but I didn't know Batwoman was also a vagitarian).

My big surprise came in the form of a suggestion that, and I quote, "Wonder Woman is a fan of sadomasochism." You don't have to be a beaver buddy to think Wonder Woman is smoking hot. I mean, I’m a married mother of four, but when I see her image—that unique blend of patriotism and glittering gold—I think of strength, beauty, power, and, well, okay, mainly the glossy, sexy red boots. As a kid growing up in the late 70s near Philly, Wonder Woman was my ultimate chick hero, putting the heroine in my Saturday morning tv heroin dose, seconded only by the cool Greek goddess Isis, who appeared in the same TV hour as her dorky and caped male counterpart, Shazam. (Talk about a gay superhero—have you seen a picture of Shazam?)

I had the complete ghetto-set of homemade costuming in order to effectively dress just like Lynda Carter. Cut from a piece of scrap metallic lamé, gold wristbands hidden under my long-sleeved Catholic-school Peter Pan-collar blouse rendered me indestructible: I could ward off the evils of the liverwurst sandwich in my Wonder Woman metal lunch box or deflect the jealous stares of the much-lamer Holly Hobby lunchbox crowd in the cafeteria.

A cheap piece of rope, spray painted gold, became the truth lasso I could use to make David Miller admit his undying love for me or force my little brother to tell our mom the truth: I had nothing to do with the missing Hans Solo action figure. (Ahem. Obviously I only stole the Luke Skywalker action figure to make out with my Wonder Woman action figure.)

And my Wonder Woman invisible airplane? Came in handy for avoiding the bourgeoisie school bus I would have otherwise been forced to use for transportation.

So I went in search of the kind of Internet, Wonder-Woman-Worthy truth that only Google can provide (because Bing seems shady).

Wikipedia tells us that Wonder Woman was created by Dr. William Marston in 1941 as a "distinctly feminist role model whose mission was to bring the Amazon ideals of love, peace, and sexual equality to a world torn by the hatred of men."

See? Wonder Woman was so cool she invented online shopping! But also that she represented sexual equality, not kinky sexual dominance. So where did this concept of her being an S&M girl begin? Was it when she was featured on the first cover of Ms. magazine in 1972, chosen by Gloria Steinem as an icon of powerful women? Nope, it was actually much earlier. A 1954 book called Seduction of the Innocent was written by psychiatrist Fredric Wertham, and suggested not only a link between reading comics and juvenile delinquency, but also the sexual underpinnings of the animated characters. Wonder Woman creator Marston was even quoted as saying his heroine "satisfies the subconscious, elaborately disguised desire of males to be mastered by a woman who loves them."

Well, that's cool, I guess. Who wants sexual equality when you can rock sexual dominance? Take that, Spidey. Your lame ass web powers are nothing against the ultimate feminine aura emanating from the Amazonian goddess powers of the most wondrous of all women.

I wonder: if I was wearing a Wonder Woman costume, do you think I could get into the funky comic gay parties in New York, which seem like they'd be super-heroically cool? I'm sure I could find someone to tie up.

Mary McCarthy is a professional freelance writer and the founder of pajamasandcoffee.com.