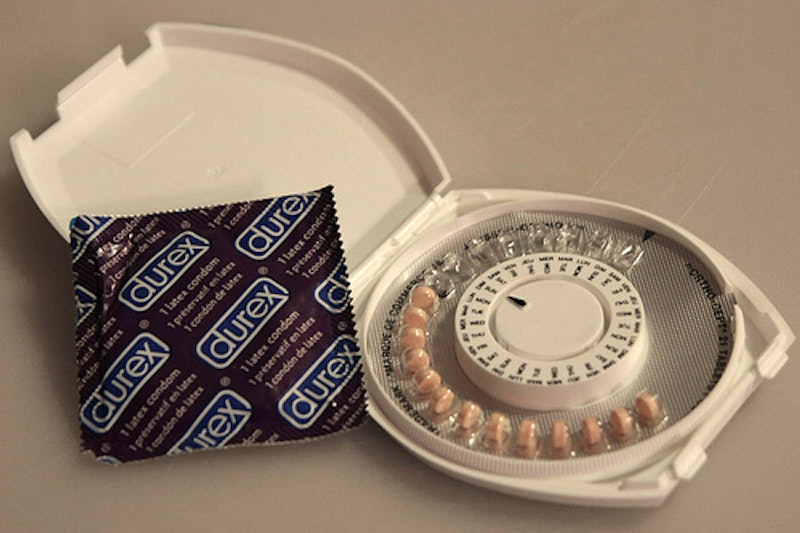 I guess it’s a little ironic to wish a happy birthday to birth control, but the birth control pill turned 50 last week, so here’s congratulations from yours truly. (As well as high-fives from the millions of women around the globe who have, because of the pill, avoided becoming mothers at unwanted times in their lives—or at the very least, had more regular periods.)

It was just before my 16th birthday when I had to sneak to a Planned Parenthood in the completely ghetto town next door in order to procure some of those baby-stoppers I’d only read about in Ms. magazine. I sat in a harvest gold office-castoff chair on a brown, stained rug and read a “Venereal Diseases and You” brochure in the waiting room, feeling like I should have dressed trashier to fit in.

A poster on the wall, depicting a crying infant, screamed “A BABY IS FOREVER!” at us wannabe rugburn victims.
I swallowed my fear like the pills I was about to ask for when they called and took me back to the examination room. The hippie, slightly butch woman doctor asked me, “Are you sexually active now?”

I stared at her. Did she mean was I making out with and dry humping my boyfriend every weekend? You betcha, Gloria Steinem! Or did she mean like all-the-way sex, and did blow jobs count? So I responded in the most mature-sounding, I’m-so-grown-up-with-my-sexual-freedom way I could muster:

She lectured me, a virgin, about how being on the pill didn’t mean I wasn’t going to die of AIDS because it didn’t protect me against any diseases. As she said this, she stuffed a brown paper bag full of three months’ worth of birth control pills, condoms in a variety of colors, and an AIDS pamphlet. And she sent me on my whorish way. I believed I was a whore because I had gone to Catholic school all my life and learned that if you had sex when you weren’t married, you were a whore. However, having waited a year to get naked with my football captain boyfriend, I was ready to earn the title.

Let’s be fair. The pill isn’t the perfect method of birth control. It does beat the crap out of abstinence, and condoms are just icky.

In a recent Huffington Post piece, ob/gyn Dr. Christiane Northrup noted, “In my experience, the pill is also associated with mood swings, weight gain and decreased sex drive in many women,” adding, “Going off the pill makes many women feel much better.”

Not exactly a glowing recommendation. But men are usually the reason women have mood swings, weight gain and decreased sex drive, so don’t blame the poor little pill.

She also points out: “We have the scientific know-how to design safe and effective hormonal contraception using bioidentical hormones, which would most likely eliminate the downside of using the pill. I doubt that we will see these developed for years to come.”

Why, doc? Is it because men rule medicine and pharmaceutical companies and (still primarily) governments? Because it seems to me that if there is clearly a demand for birth control pills with less side effects (what teenager wants to get fat for the same prom where she will get laid?), our American innovation would make it happen.

We need to be more open with our teens about sex. As a mother of teenage girls, I have a 100 percent open door policy when it comes to sex. Got a boyfriend? Get a condom! Or let’s get you on the pill! No way am I going to be a grandmother at 40. Plus, having to sneak behind my mother’s back at 16 to get birth control was not something I enjoyed—no girl should have to feel like a prostitute just because she’s trying to make a good decision. Unfortunately, I’m in the minority. Many moms of teens I know refuse to acknowledge their kids are ready to have sex.

So although I am done having kids, the birth control pill sure came in handy for me for many years. Four kids are plenty; I don’t need 20.

Mary T. McCarthy is a professional freelance writer and the founder of pajamasandcoffee.com.