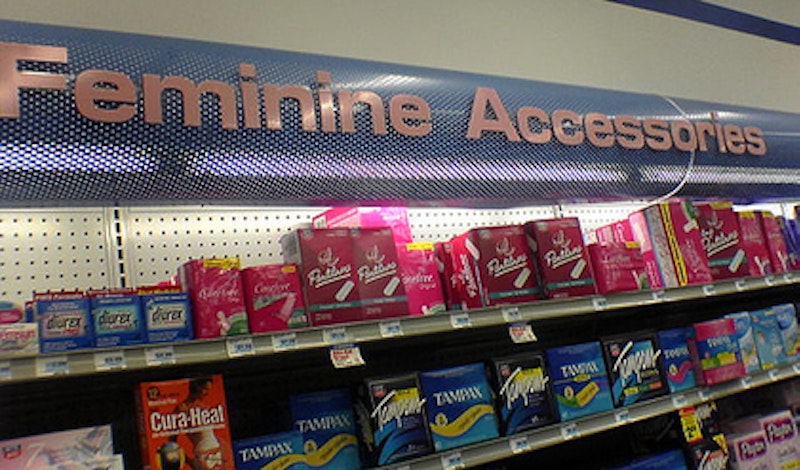 One time in high school, I got my period completely off schedule in the middle of Chemistry class. My teacher, Mrs. Lu, had a strict rule about attendance: from the time class started until the sound of the final bell, you weren’t allowed to leave the room without completely forfeiting your presence for that day. More than two absences in a semester, and you could no longer drop your lowest test score. At the time when the unwelcomed wetness spread between my legs, I already had two absences and my complete mediocrity in the subject made dropping that lowest grade an absolute necessity. I decided to stick it out, to ignore the problem down below and concentrate on learning the proper nomenclature of chemical compounds.

But as class wore on and the compounds grew increasingly complex, I became fixated on my bleeding. Ammonia: NH3. My underwear is soaking through. Sulfuric Acid: H2SO4. My thighs are wet with blood. Sodium carbonate: Na2CO3. It’s running down my leg. Ammonium sulfate: (NH4)2SO4. The blood is pooling in my shoe. Pentaamminechlorocobalt(III) Sulfate: [Co(NH3)5Cl]SO4. I’m going to die of blood loss. When the final bell rang, I jumped up from my desk, grabbed my bag and raced out of the room and down the crowded hall to the nearest bathroom, convinced that I’d find my lower half covered in more blood than Antietam. I pushed into a stall, locked the door behind me and pulled down my pants to find, nothing. Well, nothing more than a tiny spot of reddish-brown blood staring up at me from the crotch of my underwear.

I’ll be 23 this Sunday and it’d be gratifying to say I’ve moved past the crippling fear of an unexpected menstrual flow. I know better than to let a vivid imagination get the best of me and I’m definitely smart enough to avoid light colored pants anytime leading up to or just following the week when I usually get my period; but still, even after 11 years of bleeding on a monthly basis, I’m embarrassed that I menstruate, and I don’t think I’m alone in feeling that way.

Despite the fact that the majority of women aged 12 to 50 have monthly menstrual cycles, periods aren’t something we feel comfortable discussing in public. Sure, I’ll share horror stories with girlfriends or whine about feeling bloated and crampy, but I don’t often make a point of letting people know when bleeding down there. I don’t mind telling my fiancé, “hold on a second, I’ve got to change my tampon” when we’re about to head out the door for dinner, but I sure don’t leave used tampons sitting in the waste basket without wrapping them discreetly in toilet paper first. I tell myself it’s just common courtesy, not to mention hygienic, but I don’t go through the same effort with Q-tips after cleaning my ears, and those are equally disgusting. Plus, while I’m willing to tell my future husband the real reason for holding up our departure, I certainly wouldn’t be as forthcoming with any of the other men in my life. I work as the only female in an office with four men. Two of them are married, one of them has a girlfriend, and from the stories I’ve heard, the fourth is no stranger to women either; they’re all well acquainted with the world of menstruation. Still, I hide my tampons in my pocket as I go from my desk to the bathroom. I slip them out of my purse as stealthily as possible and tuck them into the top of my jeans, cover them up with my shirt.

Menstruation is such a regular occurrence in our lives that, as women, we have no problem sharing this information with members of our own sex. On countless occasions I’ve had perfect strangers ask me for a tampon through the wall of a bathroom stall, and I definitely never batted an eye about asking every single girl on the dorm floor until I found someone with a few Tampax to spare. But these sorts of exchanges only take place openly when there are no men within a stone’s throw. If I’m out to dinner with a bunch of girlfriends and someone needs a tampon before making a beeline for the bathroom, she’s not going to ask outright, speaking loud enough for the entire table of females to hear her. She’ll lean in close to the person next to her and whisper through clenched teeth “do you have a tampon,” so that no one at the next table can possibly overhear and the man across the room who undoubtedly majored in the art of lip reading won’t be able to tell what she said.

Granted, it seems a bit silly and unnecessary and even a little outdated on the part of women. There are plenty of men who are mature enough to handle issues of menstruation. As long as I give him the exact size, brand and any specifications of the tampons I want, my fiancé doesn’t think twice about picking up a box when he stops at the grocery store. But for every enlightened 21st Century male, there’s a guy like the one who rang me up one time upon purchasing a box of tampons and a box of condoms. He stared at the two boxes for what felt like an eternity and then asked, “You want both of these?” Yes. I had run out of both and was planning, within the few weeks following my purchase, to have sex and get my period. Just because both products would eventually end up in my vagina doesn’t mean I intended to put them there at the same time. I also purchased a gallon of milk and a carton of orange juice, but he didn’t ask if I planned to drink both at once.

While our culture may grow increasingly open and frank in its discussions of sexuality and gender relations, menstruation will likely remain a taboo topic. Everybody poops more regularly than women menstruate, and despite a growing library of literature on that subject (see Everyone Poops for an educational read), we don’t go around discussing our bowel movements like we do our weekend plans. No one gets up from the dinner table and says, “Please excuse me, I need to go take a giant, stinky dump.” Periods are nowhere near as disgusting as the thought of fecal matter exiting a human body.

We’ll probably never reach a point where we no longer hear terms like Aunt Flo, and On the Rag, but perhaps someday we can all feel comfortable enough to openly request a tampon in front of members of the opposite sex or buy a box in conjunction with whichever products we may choose, without an idiot guy thinking we get off on some crazy cotton-rocket fetish.