Chick-Fil-A’s anti-gay behavior has long been kind of an open secret. 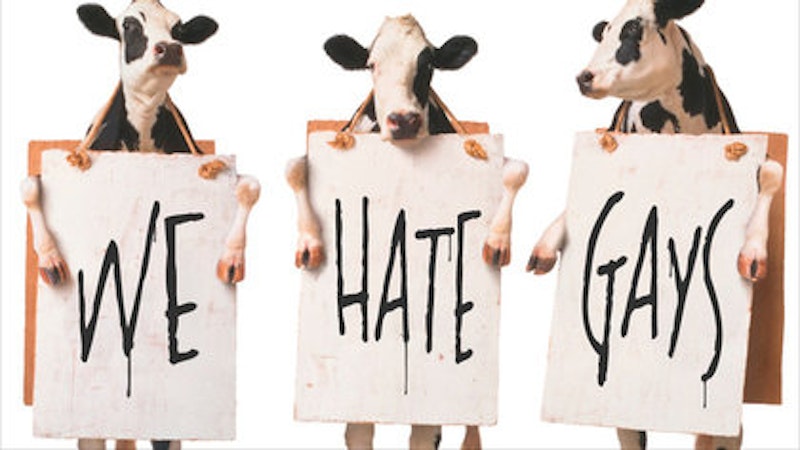 I don’t really eat fast food, but Chick-Fil-A is delicious. It’s all about those little chicken nuggets—spicy yet slightly sweet, peppery with a pinch of what might be curry. When they’re really fresh, if you bite into them they’re so juicy that they kind of explode a little bit and you wonder how that little nugget could be so good. I swore by those things for years—when I could get to a Chick-Fil-A. When I was younger my mom used to drag my sister and me to the mall, a place where we didn’t want to go, but after sustaining hours and hours of walking and trying on looks we knew she’d take us to Chick-Fil-A. We’d all order the #8 chicken nugget meal with extra large waffle fries and lemonade, and everything would be at peace in the world.

Even though people love them some Chick-Fil-A, this week everybody’s favorite chicken outlet got charbroiled over its vehemently anti-gay position. But what is this “backlash” really about? Is it worth all the fuss?

This Georgia-based fast food chain has long espoused anti-gay rhetoric. Like the time in 1984 when the company donated money to Exodus International, that ex-gay camp that’s supposed to put a stop to men from jacking each other off, once and for all. By 2010 the company flung a whopping $2 million dollars towards other anti-gay groups, including those fighting for the traditional definition of marriage.

But the thing is, Chick-Fil-A’s anti-gay behavior has long been kind of an open secret, it’s just that nobody says anything about it because the chikin is so good. So now with the news that Chick-Fil-A hates the gay taking over the airwaves, the fast food chain has unleashed the wrath of my LGBTQs and allies and there’s been a liberal—and conservative—“backlash.” For instance, the company recently announced a “recall” of all Jim Henson’s Creature Shop meal toys because of a possible “safety issue.” But the real tea is that The Jim Henson Company said goodbye to those Evangelical radical Christians. Did you really think, Chick-Fil-A, that a company based on making puppets would stick around for your anti-gay rhetoric?

And now entire urban areas are joining the backlash against the restaurant, too. San Francisco—that extremely heterosexual place—doesn’t want a Chick-Fil-A, and neither does Chicago or Boston. Thomas Menino, the mayor of Boston, wrote a letter to Dan Cathy, president of the fast food chain, in which he addresses the recent controversy: “Now—incredibly—your company says you are backing out of the same-sex marriage debate. I urge you to back out of your plans to locate in Boston.”

Not to be outdone by liberal evildoers, the conservative Southwest Tea Party tweeted some pretty incendiary stuff in support of Chick-Fil-A and the traditional definition of marriage: “2day our kids and wife had a great meal @chickfila and to support traditional values regardless anti-American fag scum say #eatatchickfila” was one. “That’s what happened when you let fag scum run our country! Our country was based on judeo-christian values. NOT SODMOY! Pls RT!” “Good time to support pro-family @chickfila for standing up to sodomy based faggot marriage #eatatchickfila.”

It’s great to boycott and protest certain companies and products for their business practices and policies, but if we’re going to come for one company, we need to come for them all. How many other businesses are as hateful or have donated to causes most of us wouldn’t support? We like to feel good about boycotting a store, even if only for a moment, because it makes us feel like our voice matters. The thing is, though, that most of us don’t make our everyday shopping decisions based on who donated what to whom. Ultra-cool Urban Outfitters, for instance, is run by Richard Hayne, a notorious mega conservative anti-gay dude, but nobody would ever know if they didn’t pay attention because his hatred is cloaked in “it” hipster jeans and zeitgeist-y things we think we need.

And I think it’s the same with Chick-Fil-A: the restaurant’s hateful rhetoric is spiced up into chicken nuggets and absolutely flawless lemonade so that nobody notices what’s really going on and keeps on buying mor chikin—it’s creating a culture of addicts around a product so they overlook the internal operations. Put plainly, it’s a bait and switch. But Chick-Fil-A isn’t the only company. We do need to address Chick-Fil-A and its backwards rhetoric, but we should also do the same for other companies.

Michael Eric Dyson, a professor at Georgetown University and frequent guest host of MSNBC’s The Ed Show, had this to say: “Don’t let Popeye’s come out saying something crazy, because that would hurt me.”