We are adults, and adults want to get laid. 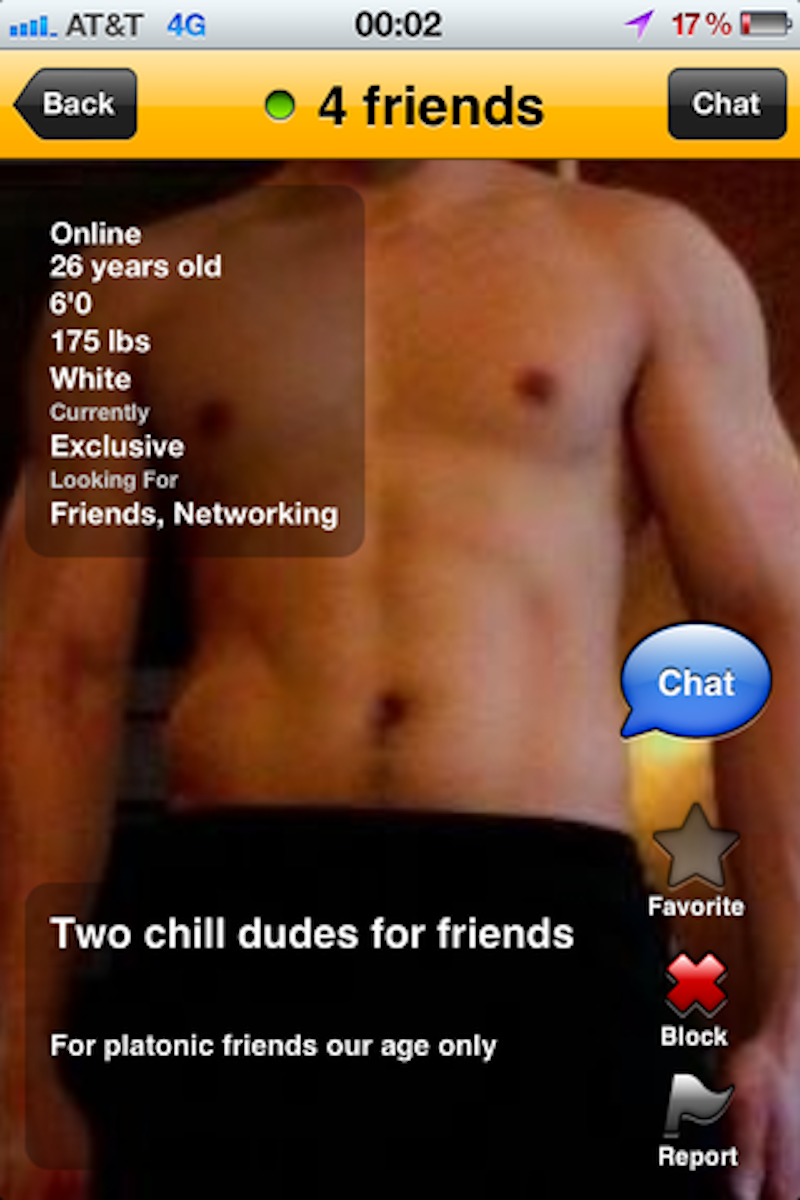 So, this week some guy emailed me a headless, shirtless pic of his very worked out, deeply pleasure-trailed torso. I was schmoozing at a magazine party in a posh Soho hotel when, during a lull of conversation, I checked my email, as I’m prone to do, and up pops the Grindr-esque pic. Yikes! His head is cut off, but I can see that he has something of a beard. Clues, clues, clues! His fully erect penis, which looks like a fantastic time, is visible but not exposed through his white briefs.

“Wow, dude, you are totally impressive :) Compliments from a secret admirer on campus :)” the email says.

I mean, I know you people text each other pictures of your private bits all the time, maybe as a reminder of what the other person is missing out on. And it’s not like I’ve never sent or received a nudie text in my life. But what do you do when you get surprise nudie pics from a so-called “secret admirer”—somebody you don’t even know?

First I thought the email was spam, maybe some kind of Internet hoax. The picture popped up right away without even having to download anything or click any special computer virus-inducing links. But it was all too ironic since the message was sent to my Yale email, and I was actually just in New Haven earlier that day returning a trillion dollars in library books. He must have seen me rolling around campus! I turned to my friend Julie and say, Holy shit. Can you believe this? I’m showing her my screen. Yo, that’s sooo creepy, she offers. Actually, it’s kind of fabulous, I say. Um, when should I call the police?

Curious about the sender, who stealthily goes by “B D,” I email him back. “I NEED TO KNOW WHO YOU ARE.” All caps.

I’m trying to get to the bottom of who this guy is. Is there any way I can figure out who he is based on a torso pic alone? My brain is scanning all the white torsos I know, which are many. So I write him back: “I need to know who is attached to such a hot body.” I’m trying to get him to give me a hint.

The hot guy tells me that I don’t know him, but that he’s seen me on campus a bunch, is also a student at Yale, and is very much on the DL. Makes a point to say that he’s not out, like me. Just because I’m wearing stilettos does not mean I’m out! He read some of my interviews, including a recent profile in the New York Observer. He tells me that when he saw my interviews he thought, wow, this guy is crazy! So he thought he would be a little crazy back by sending this well-crafted Grindr pic, hopes I don’t mind. And you know what? I don’t mind! I wanted to write more to prod him, but then I realized, ugh oh, he might try to blackmail me with these sex emails once I hit it big. So I stop.

This is the kind of thing that only ever happens in the movies. And it’s relatively strange for a queer punk like me, especially since I’ve never been a hot piece of A in the gay marketplace. I’m not necessarily “masc,” I’m not white, and sometimes my fingernails are painted black or purple or blue, depending on how I feel. Plus, I might be wearing a fringe shoulder pad at any given moment which does very little to raise the masculinity quotient! These are not typically traits that gay dudes are prone to search for in potential sexual partners. But it is incredibly flattering, though I do wish this guy would just come out already, to me anyway, with his, um, “hands” up. What’s he afraid I’m going to do, out him in the media?

Really, though. What’s the point of having a secret admirer? This is not like in elementary school when you made those four-cornered origami things that were like, “Does he like me yes or no,” and every time you said one of the words you’d mechanically open and close the paper blob accordingly. We are adults, and adults want to get laid. If you’re going to go out of your way, take the risk of sending me an indecent photo of your irresistible body and extremely enticing pleasure tool without even the slightest possibility for facial recognition, WHAT’S THE POINT?