Why Men Won’t Ask for Directions

Are we ever going to get there? 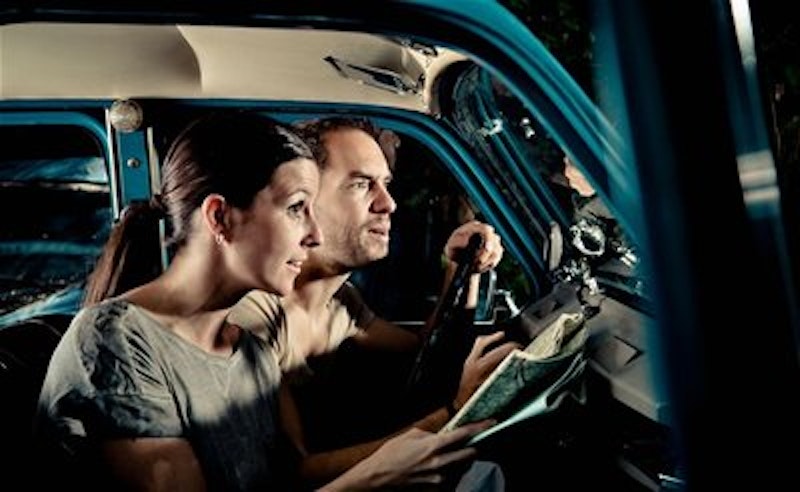 My husband and I were babysitting my daughter’s rambunctious puppy this past weekend. We decided to take him to the beach where we could play fetch all day long in the ocean until he was too exhausted to keep us up all night. Halfway there, we realized we’d forgotten the ball and stopped at a random dollar store. Pulled up to the entrance and my husband went in. Knowing full well he’d have no clue where the tennis balls were located, he still proceeded to breeze by the salesgirl who was standing near the entrance. I sat, double-parked and watched my husband walk around aimlessly in circles and tried to stay calm. He finally returned to the entrance and I saw him talking to the clerk. He was out in two minutes flat. Why won’t a man ask for directions?

When the children were young, pre-GPS era, my husband mapped out our return from a Pennsylvania excursion. It took us twice as long to make the trip home. The children and I knew we were lost when the only other vehicles on the road were Pennsylvania Dutch Amish horse-and-buggies. I pleaded with my husband to stop and ask one of these peace-loving men for assistance but his reluctance to do so put me over the edge. The kids had reached their limit and we were all ready to abandon ship. I said to him, “Do you know why the road on the map doesn’t exist? It doesn’t exist because we are in the wrong town!” Men pretend to know where they’re going even when it’s evident that they are lost.

A study conducted in England several years ago determined that men drive an average of 276 unnecessary miles per year trying to figure out their destinations. A quarter of the men said they would wait at least half an hour after realizing they were lost to ask for directions. I mean this must add up to a boatload of moolah over a year’s time on the road. You’d think with the price of petrol, every male Brit would forego a few pints of ale to save up for a GPS.

I recommend that every male has a GPS on hand or at least gives it up and lets the woman, who has no qualms about it, ask for directions. I mean after all “Are we there yet?”