Does racism have any logic in it? 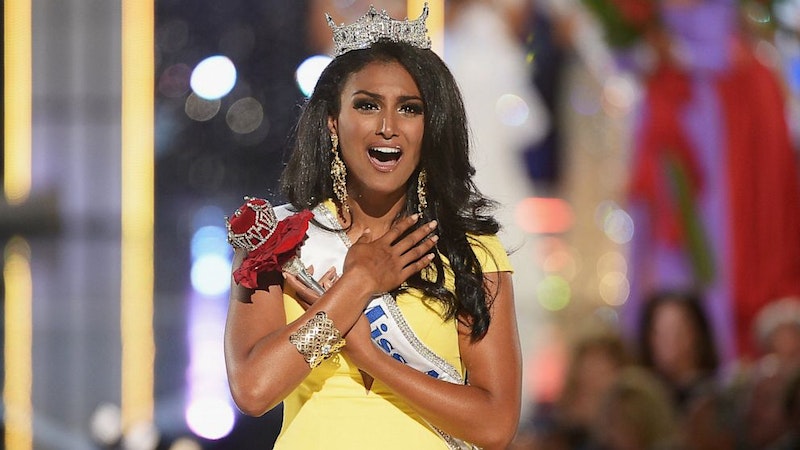 As Mary McCarthy pointed out on Splice yesterday, Nina Davuluri won the Miss America pageant over the weekend. And, as McCarthy also noted, dozens of people on Twitter took instantly to their keyboards to spout the predictable racist bile. In particular, there were a number of tweets like this one from POOKIE (@Granvil_Colt)

As McCarthy says, "These racist idiots don’t even know India is not an Arab country." Or, as Mary Elizabeth Williams adds over at Salon "There's only one thing dumber than a bigmouthed racist—a bigmouthed racist who can't even get his racism straight."

I agree that these tweets are racists and stupid. But I do wonder if the tweeters are getting their hate right. In conflating Indians with Arabs, have the tweeters somehow messed up their racism? Reason and common sense suggest that if you want to hate Arabs, and you accidentally end up hating Indians, then you've made a mistake, and need to recalibrate. But does racism operate by logic and common sense?

I'm not sure that it does. Or, to put it another way, racism operates by its own reason. That reason categorizes people not by who they are, but by what their skin color is, or what their background is. According to racism, you don't need to know people as individuals to know how to treat them; you just need to know what they look like. Racism erases individuals. Davuluri to those people on Twitter isn't Davuluri; she's her skin color, her name. They don't need to know anything else to hate her.

Once you've decided that the person in front of you is irrelevant as an individual, what category you stick her in doesn't matter that much. Arab, un-American, black, al-Qaeda sympathizer, or 7-11—one epithet is as good as another. After all, it's not like Arab-Americans had anything to do with al-Qaeda. It's not like Arab-Americans are un-American. When someone says an Arab-American Muslim is a terrorist, that's just as baseless as someone saying that Barack Obama's middle name makes him un-American, and that's just as baseless as the racism directed at Davuluri. It's all about mis-categorizing people one way or the other.

Historically, racists have spent a lot of time and effort figuring out which minorities are American and which aren't. Thomas Dixon, the rabid neo-Confederate author of The Clansmen, the book adapted for The Birth of a Nation, declared, "the Jew… is the greatest race of people God has ever created."

How you parse your white supremacy can have practical effects in who is targeted for hate and how. But I don't know that Dixon's racism is smarter than that of the anti-Miss America tweeters. It's just more pretentious. Dixon thinks black people are really categorically different from Jews, and that you've got to be careful to stigmatize the right group. In comparison, the tweeters’ naked indifference to the niceties of hate seems not honest, but not exactly stupid either. It's not that they've messed up their racism so much as that they've followed it through to the end. If you're going to hate somebody without knowing them, it makes sense that, at the extremes, you would hate them without even bothering to know why.