Why Are We Afraid Of Homeless People?

If you would just bathe and shave I would absolutely sleep with you. 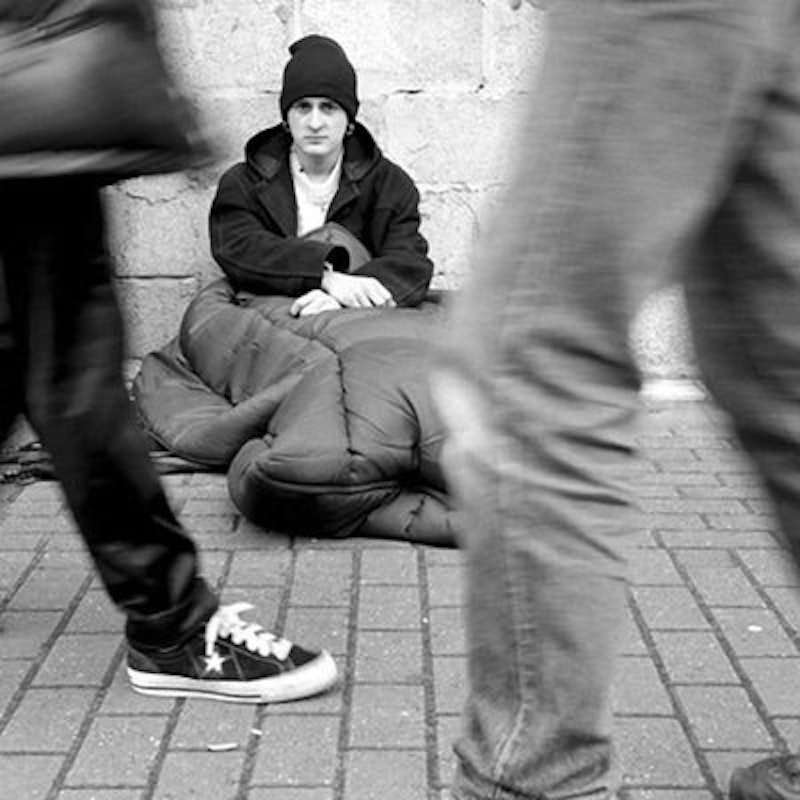 The place we choose to live says a lot about personal character—the things we value, our personalities and hopes. My apartment building is located on, let’s say, a colorful street corner that offers a one-in-a-kind view of fabulous parking lots, abandoned buildings, converted loft buildings, and homeless people begging for change. I love it. It’s gritty, real—kind of like the Meatpacking District without the trannies. Anyone who knows me well knows that this is exactly where I would live, that I would choose to live here over some leafy, pretentious cul-de-sac any day.

Today I overheard this guy in the coffee shop talking about how he was looking at apartments in my building but he was just so turned off because “there are a lot of homeless people on the corner and I don’t want to deal with that.” I mean, first of all, it’s not like there are 10,000 homeless people collectively shitting on the sidewalk and running around with their shirts off. There are, at most, two to five homeless people ever working that corner at a time and it’s a busy intersection so you’re not in any real danger. And second, what a stupid, rich white people, piece of shit thing to say, right? Just because you have business cards, wear fancy suits and take Skype video chats with very important people, that doesn’t mean you’re any better than the homeless person on the corner asking for change.

Not wanting to “deal” with homeless people is just another way of discarding the discarded, and it’s an incredibly sheltered viewpoint. In my apartment building in Brooklyn, there was a dude who slept in the hallway sometimes. It was awkward, for sure, even annoying. But I never thought, Jesus, I have got to get away from these homeless people. And at my graduate school there was the “flower lady,” a friendly homeless woman who would talk with you briefly about life, what you were doing, when you were graduating, and at the end of it all she would ask you to buy a flower. Perfectly harmless.

I’ve never had any problems with the Homeless Ones on my block. One of them even tells me how much he likes my many and various looks, and some of the homeless people on that corner are young and HOT, which is always a shame. If you would just bathe and shave I would absolutely sleep with you.

I get that people are uncomfortable with the unfamiliar, and I understand that some people just can’t confront the reality that there are people in the world who don’t have stuff and, moreover, who have other problems. But homeless people are still people. They’re just like the rest of us, and who’s to say that at some point in any of our lives that we won’t be forced to adopt culturally embarrassing positions or need help?

If you live in a plush sub-division, you’ve already joined the ranks of a particular socio-economic class, a place where everyone around you has money. A place where everyone around you goes to college and gets a car at like 16 and has an allowance. A class where the grass is always green and the PTA moms bake actual brownies. But that’s not how everyone lives, and how dare we make a judgment on another person for their life situation.

Homeless people have been fired, evicted, and squeezed out of the center, which is why they are a feature of gentrifying neighborhoods. We don’t need to give every homeless person we see a $20 bill, or become BFFs with them; but there’s no reason for fear.

Yes, there are many homeless people out there who have drug problems, who have a criminal record, or who are otherwise completely bat fucking shit crazy. But that could be you one day.