Get Out and Stay Out!

Border patrol and the unforeseen hassles of Canadian touring. 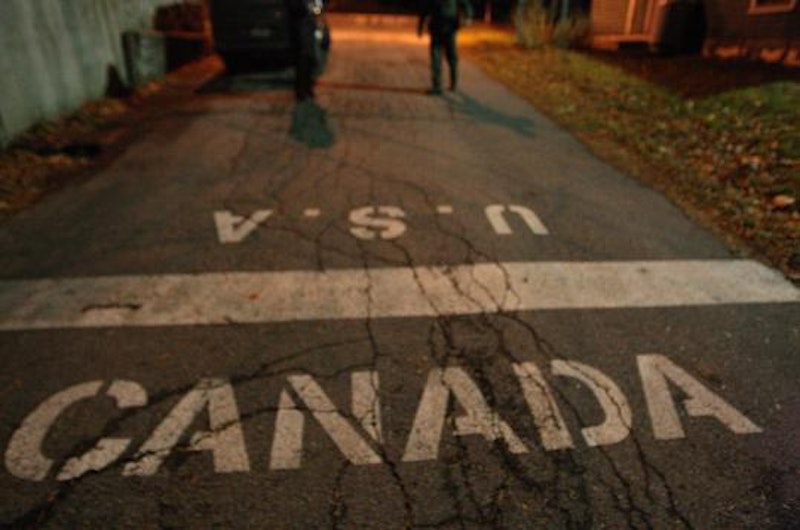 I think her name was 4567856. Or maybe it was 8675309? How do you recall a name from a traumatic past? A name that was never spoken, one replaced by numbers and relayed in a heat-of-the-moment scenario under cold interior lights in a public place? I still have the piece of paper which bears her digits, so pristinely printed nearly one year ago, a paper which commemorates the day of my deportation from Canada for attempting to play electronic music at an Ethiopian restaurant in Toronto for an audience of, according to Facebook, 15 people.

This sort of musician's horror story is not unusual. Maybe it was the giant guitar amplifier in the back seat of the car. Maybe it was the deliberate verbal defiance, an attitude that my tour mate, Nicky, and I felt was more in the spirit of a rightful protest, rather than the giant neon FUCK YOU that the border cop felt was projected. What I did not expect, however, was the ferocity of the interrogation to follow; eight hours of an alternating good-cop/bad-cop routine that seemed cribbed from a Lars Von Trier film. While I can’t speak for Nicky, what follows is more or less a play-by-play of each hour.

Miguel: I assure you that we're auditioning for a band.
Nicky: Yes.
Border Patrol: Okay, this will just be a minute. Take a seat.

Border Patrol: We know why you're here. How much money are you making at the show?
Miguel: We're not making money at the shows.
Border Patrol: I don't believe that. I encourage you to not play games with me. Nicky: Yes.

Border Patrol: How much are you going to make at these shows. If you tell us, then maybe we can let you through the border.
Miguel. We are not making any money at these shows from ticket sales. There are no monetary guarantees from the promoter.
Border Patrol: I don't believe that. Don't play games with me. Doing so will land you in jail.
Miguel: Okay. Someone may offer me money for a CD that I burned from my computer. Maybe I’ll make $2 from a sale. Usually I end up giving them away. Border Patrol: I don't believe that. Don't play games.
Miguel: Do you like Kraftwerk?

A surfer dude is shaking his head in dismay at the registration desk. His cosmetically altered girlfriend starts to sob.
Miguel: Doesn't this kind of remind you of a building that would be in 1984?
Nicky: Yes.

Border Patrol: You're not going to jail but we're submitting a recommendation for both of you to be deported and banned for a year.
Miguel: Okay. How long does that process take?
Border Patrol: Just under 30 minutes.

A Russian man walks in with his passenger. They are immediately separated by border agents. They begin to yell across the cavernous waiting area to each other. The border agents do not understand Russian and demand several times that they do not talk. One of the men is taken into an interrogation room. The other man is also taken in. Border agents take me into a room for retinal scans and fingerprints. They call a tech in because my prints are not scanning correctly. He asks me what sort of music I play. I ask the tech if he likes Kraftwerk.

The two Russian men are being processed at an adjoining desk after receiving a recommendation for a lifetime ban. One of the men has to be escorted out of the building.

After leaving the Canadian border patrol complex, Nicky and I were processed at the US border in about five minutes by a sympathetic ex-NYC cop. On the long drive to the nearest motel we agreed that this sort of thing should never happen. It demonstrates a conspicuous amount of disposable free time in the hands of border enforcement, time which in our case was devoted to turning a non-truth (the guard's assumption that we were being paid guarantees at the shows and attempting to evade Canadian taxes and fees) into a forced confession. The crime becomes one of attempted musical cross-pollination. It’s unfortunate when this form of censorship becomes institutional, but who knows, it is also possible that I'm simply not so fond of people who don't enjoy Kraftwerk.