When Art Tells You You're Wrong 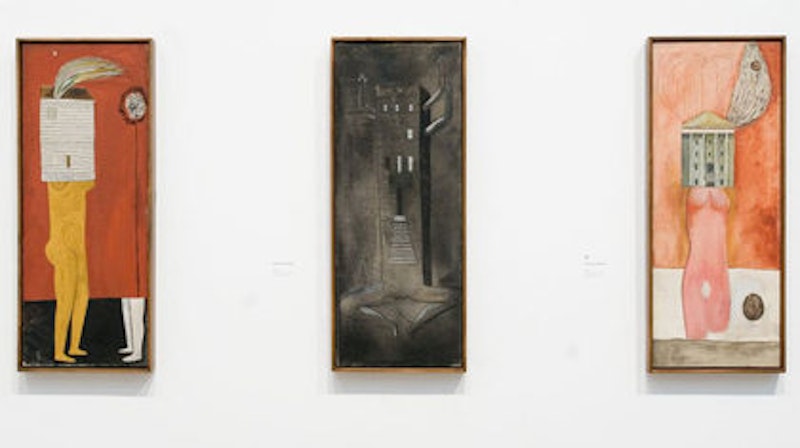 Will Gompertz, an occasional blogger for The Guardian and a director at the Tate Gallery in London, certainly looks at art quite a bit. His most recent blog post, though, is about how a certain series of paintings by Louise Bourgeois made him realize that—big shocker coming—women aren't always down with being eternal housewives. In fact, gender roles can be torturous:

The paintings formed part of a series called Femme Maison that were made by Bourgeois from 1945–47, six years after moving to New York from her native France. By this time, she was married to an American art historian called Robert Goldwater and had three children (the first of which was adopted). Goldwater was a good bloke – a loving husband and a source of intellectual companionship for Bourgeois – and she adored her children. But that didn't stop her from making a set of paintings that are so filled with rage, fear and frustration that, for the first time in my life, I began to understand what it must be like to be a woman. To have to accept that the world's view is male and all the assumptions that come with it, such as: everything you do and say is seen and judged through the prism of your sexuality, that the expectation is you will fulfil the multiple roles of mother, housekeeper, companion, worker and lover with deference and gratitude, and that men – lazy, selfish, conceited men – are not forced to wear the same, or any other straightjacket. Bourgeois's genius is that she is able to put all this across with some small paintings that are so simple they are almost naive.

And, toward the end:

Bourgeois' Femme Maison paintings scream that women are put upon, jailed, abused and patronised. Up until seeing them I had thought I was a decent, caring husband – now I know I'm just like the rest, a chauvinistic bore. I rang my wife and mumbled some inadequate apology. She was a little taken aback, but not half as taken aback as I had been.

This caused a fair amount of head scratching, as it's hard to ascertain if the author is actually repentant or not. He admits, early in the post, that he doesn't care for babies and thought his wife just absolutely loves them and so having them all to herself would be a dream come true. He was wrong. Is he aware of how caddish this all sounds? That a man of (assumed) sophistication would have such backwards-looking views on marriage?

I can't tell if the author is more of an ass for writing about his "revelation" in such a ho-hum format. Just before his final mea culpa, he manages to throw in some art historical context. Seriously?

Someone help me here.