All Irony, No Ideals

The word "indie" has no meaning anymore, so we're back to calling subcultural types "hipsters." With that kind of vague, ideal-free title, a mass-market company like American Apparel has no problem taking over. 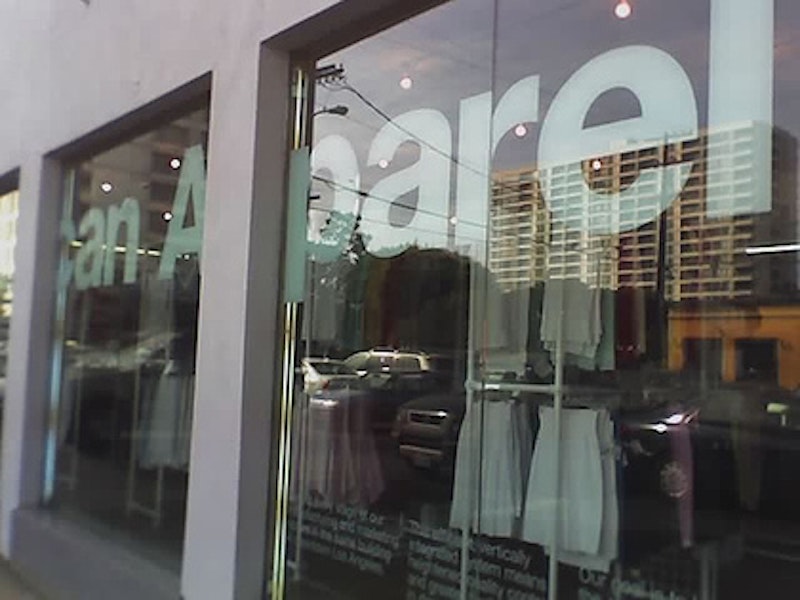 About five years ago, when I opened a checking account and started thinking about which businesses I should throw my money at, the main subculture was still called “indie.” I dabbled in indie-ness; I read blogs and downloaded remixes of Animal Collective songs, and I didn’t find it particularly shameful. I had grown up listening to the Beatles with my mom in her minivan, so I had a legitimate interest in finding music that satisfied the taste instilled by my hippie parents. After a year or two of this, iTunes was able to inform me that my favorite genre was freak/alt*/folk, and I was okay with that.

What bothered me was that the term “indie” also referred to aspects of culture other than media. Sure, liking films produced in Podunk Studios meant you liked “independently produced” media, but behaviors like using Pop Tart flavored lip balm from Target and buying posters of Edgar Allan Poe for your dorm room started to be labeled “indie” too. Stretching the word “indie”’ to mean “not mainstream” seemed sloppy, like our generation was too busy walking an extra mile to Lund’s for organic sushi to even give a sensible name to our subculture.

But there’s been a simultaneous resurgence of the nearly ancient word “hipster,” which is now used as generic shorthand everywhere from The Onion to The Colbert Report to innumerable blogs and viral videos.

We had apparently used “indie” out of emergency, sort of like a makeshift Y2K shelter in case the new Millennium brought us our own, unique cultural movement. For all we knew, we’d be decorating ourselves exclusively in actual “indie” clothes produced down the road by a band of innovate free spirits with sewing machines, and eating baked goods with different fillings from suburb to suburb. But over the summer, it seems, as the strict economic definition of “indie” became diluted to the point of meaninglessness, we’ve consented to stick with the more mutable term “hip.”

So what was the crux of this change? I believe the answer is fairly simple: American Apparel. The store has been in Minneapolis’ quaint and increasingly corporate Uptown area for only one year, and now my university’s campus—one where soft-tummied, tea-wielding hippies were once the subcultural norm—has turned into a land of skinny-limbed, jumpsuit-wearing neonophiles.

Subculture 101: the only element of a subculture that can rival the music and the ideas imbued in that music is fashion. Fashion carries the whole system of semiology that allows us to communicate who we are to people sitting in our lecture hall. Just like dreads used to mean you liked the Grateful Dead, oversize fake glasses now mean that you enjoy Cut Copy and you have a tongue-in-cheek but powerful love of Gossip Girl.

Problem is, the American Apparel ethos stands in direct opposition to the ideal that we should consume independently produced culture. American Apparel’s name alone is broad and geographical, and their bags carry a list of metropolitan areas all over the world where their code of bright colors and androgynous, overtly sexual angles direct fashion. It’s just as marketing-centric as any mainstream corporate brand, but they fool you by peddling “hipness.”

Young Minneapolitans were left with a choice: become fussy and intolerable in our consumer habits by choosing to shop at only independent-friendly stores, or give up that ideal and join the fleets of the hip and ironic. Considering that the music that has come to dominate the indie blogosphere is increasingly ironic (i.e. The Teenagers and Hot Chip), our choice of the latter option makes perfect sense. Rather than characterize ourselves by the means of production of our cultural artifacts, we went with ideal-free irony, which is practically a synonym for hip.

So what’s the appeal of irony? Ironic hipsters have been accused of appropriating every other culture’s aesthetic elements and abandoning any actual ideals, a criticism that will make your collection of tiny Buddhas and your short stint as a metrosexual seem slightly more cringe-worthy. But irony’s got to have some kind of compensation. My theory is that our addiction to irony came somewhere along with our addiction to antidepressants. Put on that seafoam green jumper, baby, and be shiny on the outside! As Harry “the hipster” Gibson sang in 1947, “Keep cool fool, like a fish in the pool/That's the golden rule at the Hipster school.”


*Except for the “alt” part, which seemed like a meaningless term recycled by business execs who didn’t realize the days of radio dominance were over for those over 12.