What We Learned From Kanye's Ellen Interview 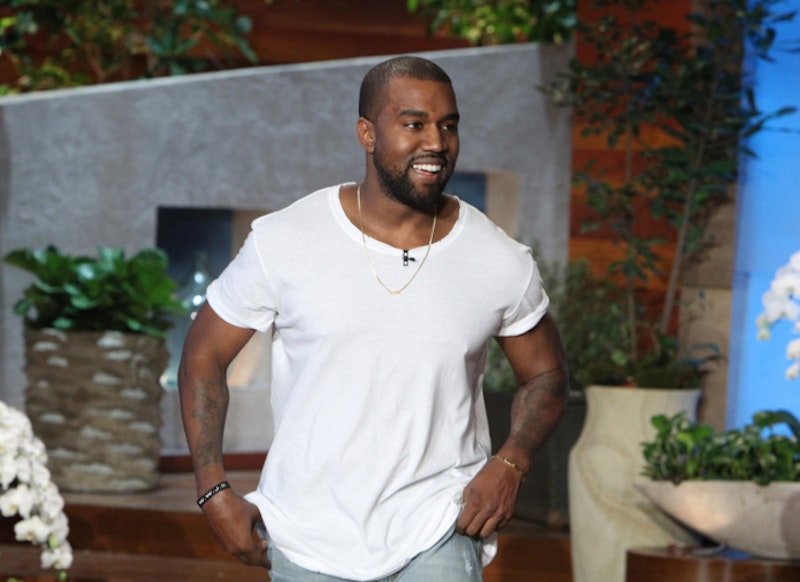 Kanye West is constantly mired in public scandal. Yet leading up to 2013’s Yeezus he was arguably more famous for his music than his behavior. The past decade of pop music has sorely lacked for enthusiastic creators and vocal producers. During this drought of outrageous musical celebrities, West’s been the megalomaniac par excellence. His outbursts keep him fresh and his obscene demands for more (women, power, auto tune, etc.) reflect the will of the people. West has said before that he is "the voice of this generation."

The voice of this generation appeared on Ellen recently, ostensibly to promote his latest unfinished/work-in-progress/mixtape The Life of Pablo. Before watching the interview I imagined Kanye would rant about how he’s financially ruined and how Silicon Valley not giving him all of their venture capital money is unacceptable. And indeed, he revisited those talking points. He spoke about wanting to work with Payless. He name-checked Phife Dawg. He expressed outrage and surprise that Picasso and Steve Jobs are dead. He alluded to sitting at a table with Obama and DiCaprio. He revealed that he had synesthesia. Through all of this he managed to fit in a mention of how his father was somewhat recently living in a homeless shelter. The comment received about as much mental investigation by West as his preoccupation with dead geniuses, sneakers, and DiCaprio’s climate awareness.

West’s plan for making the world better remains vague. He’s half-talked in the past about his visions for video games, architecture and fashion. His passion for clothing is so exuberant that he embedded his latest collection into the main attraction of a sold-out Madison Square Garden album release show. His aim is clearly the widest audience possible, yet he’s keenly aware that most people don’t hold his view that making luxury goods affordable is crucial. In a time when I can buy a shirt at H&M for $5.95 and a pair of pants for $19.95 his arguments about affordability are silly. At his most innocuous what West wants is to replace the Levi’s logo with his name and die ubiquitous. At his worst he’s asking people to draw a big equal sign between a pair of pants and happiness. It’s puzzling to me how folks buying more stuff can lead to any sort of long-term contentment. Yet West speaks with the ferocity of the Mad Hatter longing to usher in some age of sartorial consensus by hawking his duds to every man, woman and child. But joining in that consensus will cost you. Is happiness equal to those who can afford it? Is happiness denied to those who can’t buy in?

Halfway through the Ellen interview Kanye was more reflective. “I feel that I can make things better through my skill set. I am an artist.” He mentions having asked Disney to set him up with a production team. While not explicitly mentioning going into cartooning or filmmaking, it’s interesting to imagine how that partnership would play out. In a Disney production, no one talks about the director or the one animator who made X possible. Can West deal with having his name marginalized for a larger purpose? As a global brand is he the Dropout Bear or is he a fascist draped in his own camouflaged clothes?