What if this is as good as it gets?

On losing everything, including your mind. 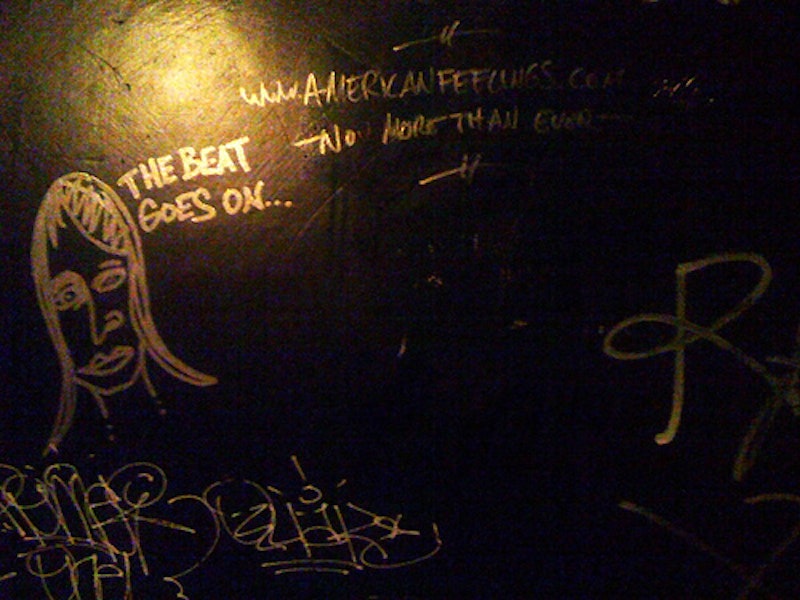 I lost my keys a few days ago. As much as I like doing a gymnast move into my roommate's bedroom window every time I lose my keys, it still sucks because what if my roommate was sleeping until I crawled through his window and what if he's got morning wood, which I've never actually seen because I'm allergic to penises in the gayest way possible, but which I've heard about. This happens all the time. Losing shit, that is. My keys, my wallet, my phone--all are foster children that get yanked from me just when we're getting close. I leave one or two or all three vital goods at the bar, go outside to smoke, and come back to nothing but a PBR that might be roofied.

After losing my keys and risking the sight of my roommate's panty bulge the other day, I realized that I need a system to keep my shit with me. My first thought was that I should go down to the Exxon and find a day-laborer to follow me around and pick up my shit when I drop it. I ran this idea by a friend, who said, "Get a bag, asshole." And while I like to think that my original plan was a sort of Reganomics wealth-spreader, I suppose using immigrants as Sherpa is kind of arrogant.

The thing is, I deserve to be rich and I deserve to be famous and I deserve to have someone carry my keys for me. Actually, deserve might not be the right word considering that I set my alarm for one thirty in the afternoon and stil l manage to oversleep every few days. Unfortunately, it's not easy to get famous when you spend most afternoons taking bong hits in your underwear and rearranging the Harpers you buy because you like how they look on your coffee table even though you only read the index. And yet, my own personal and professional success has always seemed as inevitable as the Mayan apocalypse of 2012. I don't need to work. I don't need to study. I don't need to pay my bills. I just have to sit here until a giant stork picks me up and carries me to the next tax bracket. Fame jus t happens. This illusion, however, is slowly unraveling. I'm starting to think that I'll have to do something other than compose witty tweets if I'm ever going to get off the family plan, much less hire a Sherpa. I look at Facebook profiles of old classmates -- people with actual in-laws and actual children; who didn't make more money on unemployment than on actual wages this year -- and I feel superior because I have vintage Wayfarers and jealous because I haven't had sober sex since the Bush administration.

I've tried several methods to rectify this situation, to become, if not famous, at least someone with a bank account and a functioning liver. I got a job with casual Fridays and a swivel chair, although they fired me after a few weeks for what they call "tardiness" and I call "making my own schedule." I went to yoga once but left early because I was convinced the teacher could read my mind and I didn't want him to know that I make grocery lists when I meditate. I even started grad school, although when I dropped out after a semester, I wrote that I was leaving because grad school makes me want to kill myself on the withdrawal form, which no one found amusing but me, especially the dean, a ninety-year-old woman who called to see if I was serious about baking my head in the closest oven, to which I replied, "If anything made me kill myself, it'd have to be a lot more interesting than grad school."

I blame genetics for my failures. I have the lazy gene; I have freckles and blue eyes and I'm lazy. Who can argue with DNA? This theory, unfortunately, doesn't hold. My twin sister runs marathons and has car insurance instead of a DUI and a bus pass. My brother not only runs marathons, he accomplished the thing our parents wanted most for us: he married a doctor. I can't compete against those two. My sister and I didn't even go to the same high school. She went to a boarding school for nerds while I was home schooled with the Jehovah's Witness family across the street after being expelled for pocketing the proceeds of the art club bake sale. After college, my twin taught English in Japan for a year and I spent my savings on four days in Amsterdam but was so stoned that the only thing I remember was a bunch of Spanish guys circle jerking in the hostel.

I do want to follow my sister into adulthood. It seems so calm, so pleasant, so tidy to have steady income and spare keys and running shoes. Besides, all my friends have left the playground for work or marriage or AA. I want this. I think about how good it would feel to go to my swivel chair job in the morning and to come home sober in the evening, to eat off actual plates with my actual partner, to fold sheets with someone else. To be a morning person. I think about this and I think about how I could do it. I could look for a job or clean my bathroom. I could call my mom and thank her for paying my phone bill. I could go running with my sister and play with my brother's kid. But how do you start? How do you go outside when it's too hot and all your clothes are dirty and besides, Dallas is on. If the Mayans were right and we've only got two years left, what's the point in putting on pants, or trying to get famous, or carrying your own bag?

Maybe I really am meant for fame and fortune. But for now, while there are bong hits to take and TV to watch, I am just someone who drinks too much and eats too little, whose days are boring and whose nights are empty, someone who is late for work and steals from the art club, who owes you money and probably needs a shower. I am someone who thinks more about getting a servant than getting a job, who looks for the stork through vintage Wayfarers, and wonders where she left her keys.