A Message to Parents 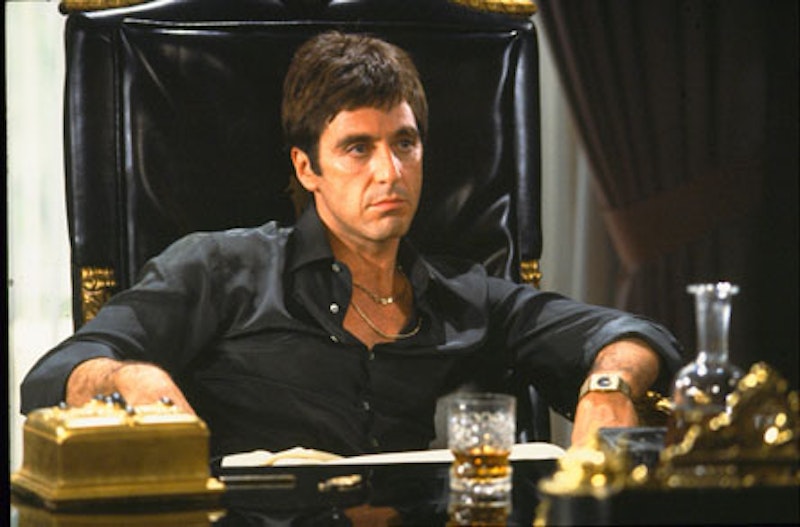 The latest clip to sweep YouTube appears, at first glance, to be a school production of Scarface, Brian DePalma’s cinematic monument to the intersection of outlaw culture and the American Dream. Since its release on March 30th, the video has garnered over three million hits and raised the ire of parents concerned over the production’s transparent rendering of adult concepts; a pile of popcorn represents a mountain of cocaine, the word fuck has been replaced with fudge and Nerf toys stand in for sub-machineguns. Excepting the aforementioned substitutions, everything else remains adult in miniature; we cringe as a bite-sized Montana balks at his wife’s drug addiction or reacts violently to the romance between his literal partner in crime and his sister. Finally, we are treated to an ending that is no less outrageous than that of the original film; the child-actor playing Montana gyrates adorably as he is riddled with pretend bullets, then another child is ushered onstage to deliver the coup de grace: a shotgun blast to the head (in this case, a Nerf dart to the back).

And just as we assume the familiar posture of outraged parents armed with the usual statistics about media violence and school shootings, it comes to light that the school production of Scarface was a deliberate provocation of our protective instincts. The clip was staged in a rented theater in downtown Los Angeles, cast with professional child-actors, and directed by Marc Klasfeld, a popular music video director. After breathing a sigh of relief, we are taken by the simple elegance of the hoax—that Klasfeld, who has worked with such icons as Lady Gaga and Jay-Z—uses cardboard and popcorn to make us believe that we are watching a school play gone horribly awry.

But what remains is a new take on an old question: how to raise children in an age when violence—simulated or actual—is only a mouse-click away? Even after various conservative (and liberal) organizations talked the issue of age-appropriate content to death in the mid-1990s, the question over what children can handle persists today. Though Klasfeld seems more intent on creating a viral stir than in sparking a meaningful debate, the video unwittingly suggests that children may be exposed to adult themes without being damaged by them. What else could justify the audience’s unabashed applause at the end of the clip (it’s worth mentioning that the applause was probably scripted and the audience was made up of the young actors’ parents)?

The real issue is not so much whether children should be exposed to adult themes (that many children living in the digital age will receive an untimely initiation to the adult world is inevitable), but whether children should be deliberately cast in roles they are too young to understand. Consider the thousands of young girls who are paraded throughout the country in childhood beauty pageants. Few parents would endorse the sexualization of their prepubescent daughters, and yet a glittering minority of girls is taught how to walk in heels, apply lipstick and proffer a coquettish wink. Thus the sexual postures of women are forever imprinted onto the minds of young girls. And even if the usual consequences (eating disorders, body dysmorphia, over-sexualization) are averted later in life, who is to say that these girls will outgrow the conditioned desire to please? Who is to say that they will escape the need to put on a show when the desire to perform has become instinctual?

Anyone who knows at least one overbearing stage-mom realizes that violence is not the danger. What is problematic can be described as the imperative to perform. Though I doubt the young actress playing Michelle’s Pfeiffer’s role will develop an addiction to cocaine and dangerous men, I would be surprised if she did not already suffer from a Pavlovian penchant for applause.  By pushing children into the spotlight and rewarding theatrics that—to a seven-year-old—are largely incomprehensible, we privilege entertainment over understanding. Under this system, parents produce offspring who are more likely to please than to ponder, to perform rather than engage and to become props in plays when they ought to be protagonists in life.