A difficult balance of humor and trauma. 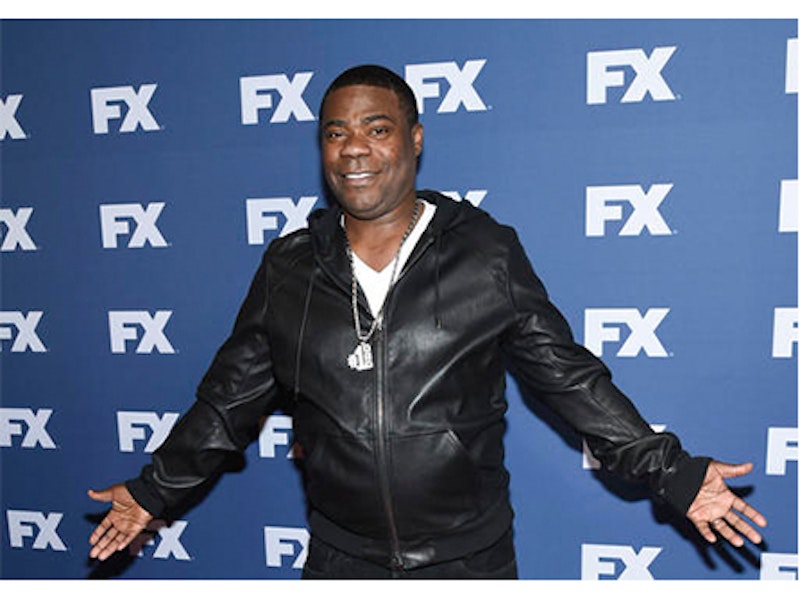 Tracy Morgan was, until his recent accident, just about the funniest comedian in America. Not necessarily the most insightful or the cleverest, but he had delightful inventions and carried himself with an ease that offered a certain liberation. His disgraceful jokes and manner were a kind of grace. In a social situation where comedy is subservient to racial justice, that's just not possible.

His persona, best shown on 30 Rock, itself a comic achievement, was far cleverer than anyone gives him credit for. Morgan took the vulgarity of the rap hero and the opulence of the celebrity and used them to turn upside down the confrontational and haughty manner of such idols. He did what comedy is supposed to do—mock those foolish enough to make idols of themselves. He offered us a character who was elaborately dedicated to reducing the pretense of demigod status to the mewling and petulance of a child.

This had other, secret virtues. First, the humility of his persona allowed him to criticize the fashionable insanities of the successful, professional classes, who looked, in the comparison, thoroughly unnatural, fanatically anti-erotic, and lacking in common sense. There's exaggeration there, but a lot of truth, too. He embodied everything mockable about celebrities and nevertheless managed to show that the responsible, self-seeking, neurotic normal people are also slightly insane.

Next, his sense of entitlement sings out to our own, as we share in a more existential key the frustration with lives that don't yield the satisfaction or justification a stable society and a Christian faith offered our grandfathers. We, too, feel like abandoned children at some level and it's often better to deal with this comically than to wonder what we’ve done that we know longer trust in some providence.

Finally, he restored common sense to its rightful place, to the extent that it’s compatible with extremes of vulgarity, especially about sex. This matters a lot, because the immediate basis of comedy is laughing at the unusual, at that which lacks the approval of common sense. But even the polite liberalism of our times lacks any tolerance for exceptions to the pieties that pretend feebly but hysterically to the name of ideology or Progress.

This is what I expected to see when turning to Morgan's new TBS show, The Last O.G. Jordan Peele and John Carcieri created it, which stars Morgan as an ex-con, former crack dealer, who has to deal with the hipsterized, gentrified, legalistic Brooklyn of 2018. And Tiffany Haddish as his former girlfriend who, he learns, now raises the children he fathered with a white hipster husband, soft and sensible and responsible, in the upper-middle class to which he himself never even thought he might aspire.

Brooklyn has changed as much as the liberal audience of stand-up comedy. You can’t mock what was fair game even 10 years ago, if not five. So Morgan does something else. He takes the Rip van Winkle premise and uses it astutely to reflect on parts of America we don't see on TV or anywhere else in public. If moralistic hipsters are too good for the funny baby-man Morgan used to play, are they really moral enough to treat ex-cons as human beings?

The show plays for laughs Morgan's suffering and also the way other ex-cons are almost excluded from living the American life. It doesn't take itself too seriously or show its heart too easily. Cedric the Entertainer plays the cruel, but human guy in charge of the halfway house. He voices the full, unvarnished contempt for felons. We'll see whether this shows up in the press, but I think not. This isn’t the kind of flashy show that gets attention.

My own criticism is different. The moralistic drama or Morgan's rehabilitation kills his sense of humor. His former drug dealer status also means he doesn't get to criticize anyone, except possible society in the abstract. It's like Morgan had been lobotomized by the self-righteous Nurse Ratched of Progressive Moralism. I grieve.

You'll hear ex-cons talk about growing up without fathers and how it drove them crazy and, eventually, to jail. They're not blaming someone else for their failures, including being bad fathers. But poor people really don't have fathers and the rich people that stand in judgment of their failings do. Our liberalism doesn't even have a way of dealing with that. The drug dealer who leaves his girlfriend means that from her new perch in the upper-middle class, she gets to treat him like dirt, with justice. More power to the women. But it also encourages the comfortable hipsters to spit on the poor. Morgan should at least get into the class issues in a serious, thoughtful way if he abandons his previous comic style.