Towards An Ethics of Prayer 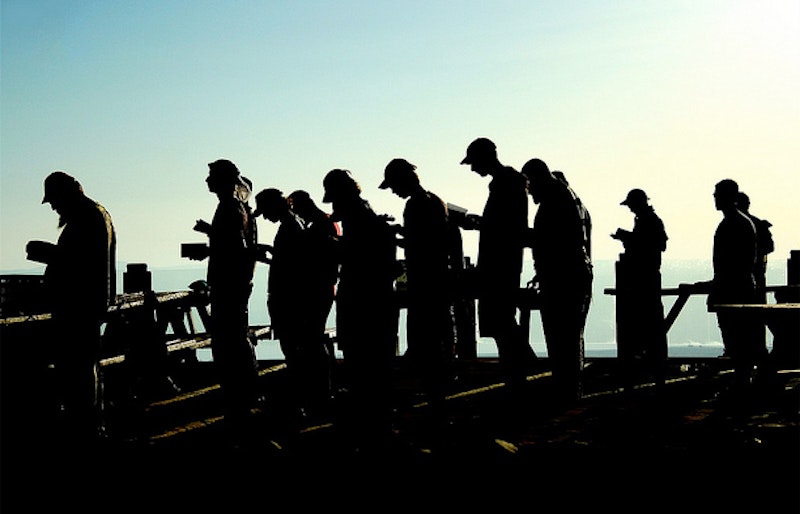 The issue isn’t whether or not there’s value in prayer; that isn’t in dispute. Arguments can be made for the practice on both sides of the fence: believers would contend that prayer is a means of communing with the Almighty, while a benevolent atheist or Wiccan might be convinced, perhaps, that by bowing the head and briefly separating one’s self from the here-and-now, one is entering into a sort of international harmonic convergence—a humanist mind-meld, a karmic conference—with millions upon millions of others, joining hands, metaphorically-speaking, and grooving on the collective, comingled psychic vibes borne of more hopes, fears, and dreams than your average non-deity can even begin to conceive of.

Murmuring a prayer at bedtime is like encasing yourself in an intangible armor, a defense against things that go bump in the night and fray the nerves during waking hours; a personal, fortifying experience. But in pews or around a table or in other group situation, prayer gains an extra intensity. This is regardless of whether you go in for a general blessing, a Hail Mary, the Lord’s Prayer, or any of hundreds of possible orisons. Someone leads the way, while the rest register amplifying “Amens.”

There are leaders, it is said, and then there are followers. But no one ever discusses the responsibilities followers—or those praying singularly, but not appending personalized invocations to an established prayer—might bear, or whether it’s okay to treat prayer like stealing cable or siphoning gasoline or raiding your friend’s stash. Is it enough for you to mouth a prayer without a conscious, specific entreaty? Is it acceptable for my pastor to deliver a long, impassioned homily that doubles as a fiery symphony of devotion and worship or for someone else to bless dinner if I am not invested enough, as a supplicant, in the act of prayer at hand that I’m not feeling a tinge of guilt at not actively praying myself, to the exclusion of all other thought? And does this lack of direct engagement negate or dampen the possible good intentions and impact of a prayer someone nearby is saying, or does it simply mean that I, and others like me, are not full contributors to the prayer effort?

Questions like these become acute when you realize that night after night, during a suppertime prayer, you are the only one who isn’t totally in the prayer zone; you realize this when you realize that you’re aware of what everyone is saying with hands folded and heads bowed because while you share in the general prayer ambiance, you’re sending something up. And then, a separate issue, there’s the matter of encouraging those undergoing hardship or tragedy by insisting that you’re praying for them—or, more, defensively in terms of possible prayer libel, “we’re praying for you”—when the truth is that you only prayed maybe once, fleetingly, and the statement was more of a show of support and empathy than a hard truth. But is it a lie? If you haven’t gone so far as to really pray, but these people have occupied your thinking, if you’ve felt concerned about them and intended to pray for them but it slipped your mind—well, does intention count for much, or for anything?

Perhaps it’s enough to express that, to offer condolence in that fashion—maybe it’s the gesture that helps a fellow human being over the hump on a bad day. Perhaps not. But it’s something to think about, ideally when you’re not supposed to be praying.