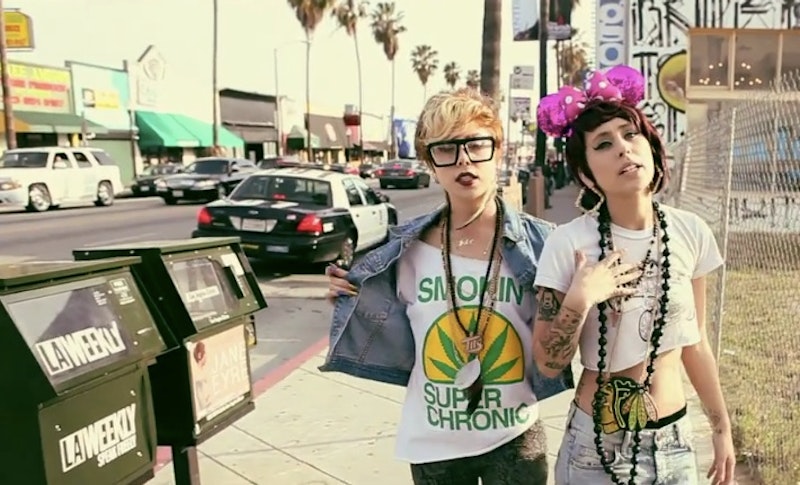 Mix art-student hipster style with 90s hip-hop panache; add West-Coast (Bay Area) pride and lots of weed, and Kreayshawn is born. After the release of her new video, “Gucci Gucci,” rapper Kreayshawn, member of the “White Girl Mob,” is turning the heads of major record company executives. With a reportedly pending $1 million contract, she might be the next female hip-hop artist on the rise.

Her song and video oozes the Bay, from the beats so prevalent in hip-hop music on the West Coast to the ghost-riding, where she sits atop of a moving low rider, smoking a blunt. What’s more interesting, however, is the lyrical content of the song. Kreayshawn, a self-described editor, director and artist who studied at Berkeley film school, challenges the conspicuous consumption favored in hip-hop communities. “Gucci Gucci, Louis Louis, Fendi Fendi, Prada/Basic bitches wear that shit so I don’t even bother,” she raps in the chorus. Instead of lauding the top designers, she claims she doesn’t need those kinds of labels for her self-validation; she has her own swag that’s not a function of branding.

Compare that to Eve, veteran female rapper, in her collaboration with Swizz Beatz. In “Everday (Coolin’),” Eve alludes to her “hot pink Birken;” even Swizz unabashedly drops the names of Alexander McQueen, Givenchy and Balmain in his verses throughout the song. Consumer culture and hip-hop have gone hand in hand since the birth of the genre in the late 70s. From Run DMC’s Adidas sneakers to Drake’s Commes de Garçons PLAY cardigans, rappers are always emblazoning themselves with explicit fashion brands.

But what happens when a new artist like Kreayshawn, goes against the grain and derides the status quo in hip-hop? In the video, she swaggers around mannequins in a Prada boutique that are dressed in the Spring/Summer 2011 collection, ubiquitous in many fashion magazines and blogs. In her Minnie Mouse ears, baggy clothes and tattoos, Kreayshawn seems to be a champion of individuality among the static drones wearing the latest Prada couture.

It’s going to be intriguing to see what comes of this underground (white) female rapper. Will she get recognition and fame? If so, what will happen to her style? There are many artists who start their careers with humble style then explode towards high-fashion insanity. Take Nicki Minaj, for example; she’s a long way from the wife-beater-and-jeans get-ups she used to sport. Now in Givenchy catsuits, Minaj demonstrates how success in hip-hop is almost synonymous to a complete wardrobe overhaul.

There’s nothing heinous about wearing nice stuff when you have the means. But how will Kreayshawn navigate through her potential success without being tempted by Gucci Gucci, Louis Louis, Fendi Fendi and Prada?