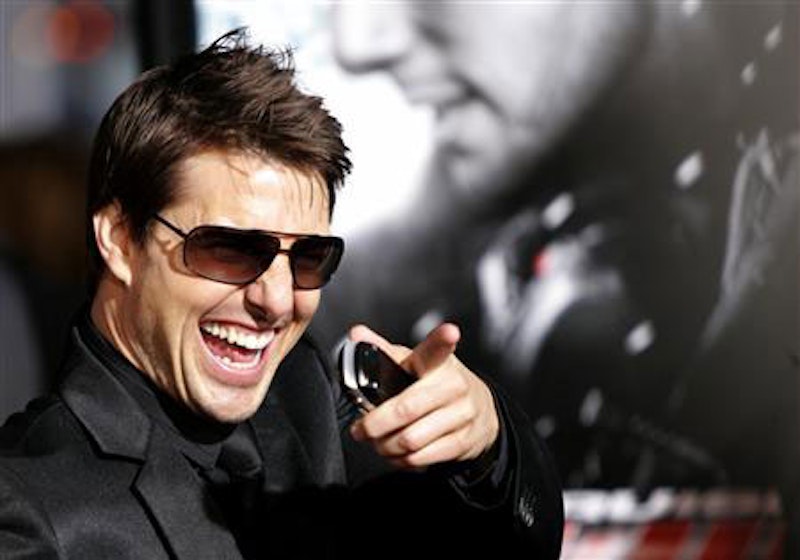 Tom Cruise owns his own coat of arms, and occasionally hunts and mounts wild pygmies.

Tom Cruise doesn’t see anything funny about his last name, and if Tom Cruise is driving you somewhere in his car, and you say something like “I’m cruisin’ with Cruise” in a smirky, self-amused way, and you turn to Tom Cruise gauge his reaction to how clever you think you are, you will not see Tom Cruise glowering dangerously back at you, because you will be airborne via ejector seat, because each vehicle in Tom Cruise’s fleet is equipped with a panic button installed for situations like this one, where people make that dumb joke, when Tom Cruise needs to drop ballast, or, one supposes, propel it.

Tom Cruise recently happened upon some unredeemed Tower Records gift certificates from the early aughts; elated, he rushed out to redeem them, only to discover that Tower Records is toast.

The thing that most people who take it upon themselves to envy Tom Cruise envy about Tom Cruise is his smile, but what these people don’t understand is that a great deal goes into keeping that smile so pristine, that exemplary dental hygiene doesn’t just like happen by accident, that Tom Cruise goes to almost unspeakable lengths to maintain that 50-megawatt smile, flossing every hour on the hour, eschewing red wine, gargling Listerine so often that it’s obsessive, brushing so frequently—during charity events, at his kids’ school functions, between filming dangerous stunts in action flicks - that Tom Cruise’s gums are constantly dripping, fairly glistening, with blood, and everyone knows, because even when Tom Cruise’s gums are dripping with blood he’s still grinning fiendishly, almost maniacally, like he just broke himself out of Arkham Asylum, so it’s not even so much a rumor that Tom Cruise is some kind of amiable werewolf or cannibal or something: it’s more of a given, an open secret that everyone just accepts.