The Supreme Hairy Eyeball In NYC

A Day in NYC: Supreme, Generation Records and the Swatch hunt. 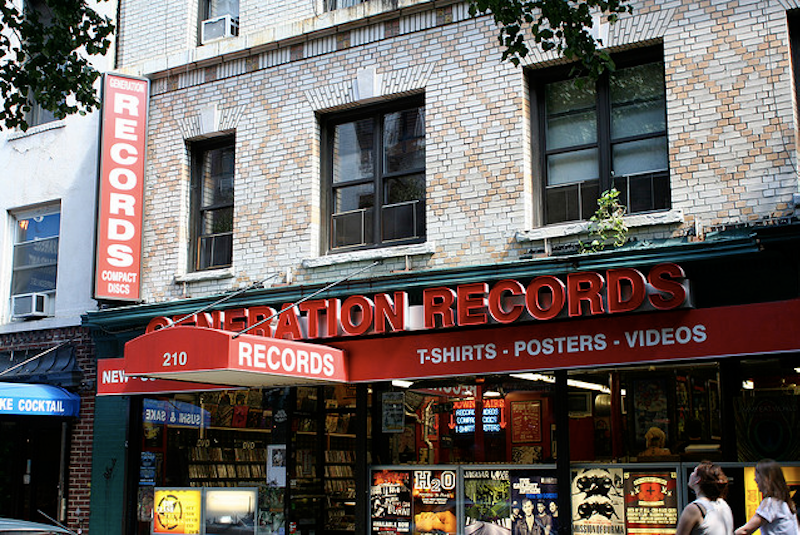 Last week, the kids and I were settled in at Fatty ‘Cue, a superb bbq joint—for the East Coast, that is—in Williamsburg, blabbing about music with my nephew Quinn, a Brooklynite who was on his way to Tokyo the next morning. At one point, between the servings of excellent black-eyed peas and brisket and lamb ribs, my 16-year-old son mentioned that we’d be going into the city to buy a pair of sneakers at the trendy skate boutique Supreme on Lafayette St. Quinn nodded and said the joint got pretty crowded. That wasn’t the half of it: when Booker and I arrived at the destination—right across from the still magnificent Puck Building, where I kept offices for New York Press during the 1990s—there was a creepy bouncer who presided over the line to get into the tiny shop. A line! I was fairly bowled over, since it was about two in the afternoon and it wasn’t if we were among the non-glamorous behind a velvet rope for some horrendous nightclub well after midnight.

The customers, inside and out, were all about Booker’s age, some tourists, some natives, I suppose, and we killed 15 minutes until Mr. Important granted us entrance. I guess it’s a gimmick, which I can’t fault, since business is business, even if all the young dudes running Supreme probably wouldn’t admit as much, but it’s not as if they didn’t have enough help, or that the amount of product was so abundant that they couldn’t have let everyone in. In any case, Booker chose a swell pair of sneaks, a light blue number with brown soles, and we hurried to pay and vamoose from this minor nightmare of a retail outlet.

The clerk, but of course, was sporting shades in the dimly lit store, and wore a faded vintage floral shirt that could’ve been mine in 1968, and an attitude that was the very definition of the word “supreme.” If he were more friendly, I’d have mentioned that one of the first “shock jocks,” Barry Richards, got fired from WINX-AM in Rockville, MD in the mid-60s for saying on air, “The Supremes make me cream in my jeans.” A natural reaction back then, when the Super Girls—before Diana Ross went all diva—were on fire, knocking out a steamy number one hit every three months. But I was kind of pissed at the inconvenience at Supreme and so we hit the streets to find Booker a new digital watch, since his last one was fried when he wore it in the shower, even though it was advertised as water-proof.

It’s not easy to find a digital watch today, which suits me fine, since I find the whole concept abhorrent, and I guess it’s because teenagers are so accustomed to using their cells to check the time that those who do buy watches are thinking about a fashion statement rather than practicality. Anyhow, we went into a Swatch store in Soho, looked at their garish wares, found nothing digital and asked the mousy guy roaming the floor why they didn’t carry that model anymore. “Oh,” he rolled his eyes, “at Swatch we want to help kids learn how to tell time.” What horseshit. Playing the “it’s for the children” card with a straight face, like he was an ambassador of education for Lower Manhattan. A more honest salesman would’ve said, “Nah, the company scrapped that line since digital sales tanked a few years ago.” Not that I’d expect that kind of candid admission, which would be like a Starbucks busy bee—sorry, barista—telling a customer that the caramel latte with triple whipped cream was on the gross and unhealthy side, especially at nine a.m., but it would’ve made my day.

As it happened, such a bright moment occurred just a half hour later at Generation Records on Thompson St., a longtime favorite of mine, for its eclectic selection of CDs and extraordinarily friendly and accommodating staff. I’ve never cared for the expression, “in a New York minute,” but my mood shifted from cranky to jolly just that quickly as I was browsing, looking, in vain, for a disc of alternate takes from the Byrds’ Younger Than Yesterday and Notorious Byrd Brothers sessions, and then started pawing through the hundred or so unofficial Dylan offerings. There was nothing I didn’t already own—and the bin is so cluttered with live and worthless (to me) Dylan recordings from his post-1980 series of personas—but then I felt a tap on my shoulder, turned around and a kid, asked politely, “Excuse me, man, but do you think this boot is worth the money?” I examined the two-disc set, which went for over $50 and told him no, unless you favored Dylan’s brief born-again burlesque it didn’t make sense to buy it for the dozen or so really great outtakes from 1963-’64.

The teenager, who couldn’t have been older than 15, judging by his spotty skin and crackly voice, was like a time traveler, wearing a floppy brown hat, jeans and a lightweight checked jacket, and would’ve fit in perfectly with the young adults who frequented the lamented Freebeing Records in the East Village decades ago. He quizzed me about Dylan—no doubt pegging me at anywhere between 50 and 65—and asked for advice on what to buy. He’d first listened to Dylan, he said, when he was 10 and found one of his dad’s old Blood on the Tracks LPs, was hooked and then, when he could afford it, bought all of the pre-1970 Columbia releases, putting Blonde on Blonde at the top, with Highway 61 a close second. I steered him to a disc that ran just $13.99 that had over an hour of music, with outtakes of “Visions of Johanna,” live Newport songs (both acoustic and the ’65 show) and a really jazzed-up version of “It Takes a Lot to Laugh” that’s more than just a curio, even if it doesn’t measure up to the majestic final release on Highway 61. He took the CD, said he was late for a train but was glad to meet me and shook my hand to say goodbye. A polite young fellow, I thought, who was kind enough not to look bored when I went on about Dylan.

A few words about Brooklyn. I’ve never been a fan: not as a kid, not as a resident of Lower Manhattan for 16 years, and not in recent years, as more and more neighborhoods become gentrified and are extolled (and then condemned) in what passes for the New York media today. Nonetheless, as my older son Nicky will be attending college there next fall, we went the “when in Brooklyn” route and stayed at the Hotel Le Bleu in Park Slope. The souped-up Motel Six was in the middle of nowhere, surrounded by industrial parks, a Staples and Pep Boys, and though it seemed the small staff was consistently plagued by this or that breakdown, it wasn’t half-bad at all. No room service, of course, and its restaurant was under renovation, but I really liked the young ladies at the front desk and the repair guy, who was sort of like a Hispanic version of Schneider from the long-forgotten sitcom One Day At a Time. And we did pass an extremely pleasurable hour with Madison Moore at his favored café in Williamsburg, Second Stop, which was bustling and, better yet, was outfitted with fixtures that could’ve, in a leap of fantasy, led you think it was 1946.

Still: if Brooklyn is the hopping borough that’s advertised, isn’t it time that proper taxicabs replace the overpriced livery cars?