This Man Is Freezing

It’s not just women who suffer from extreme air-conditioning 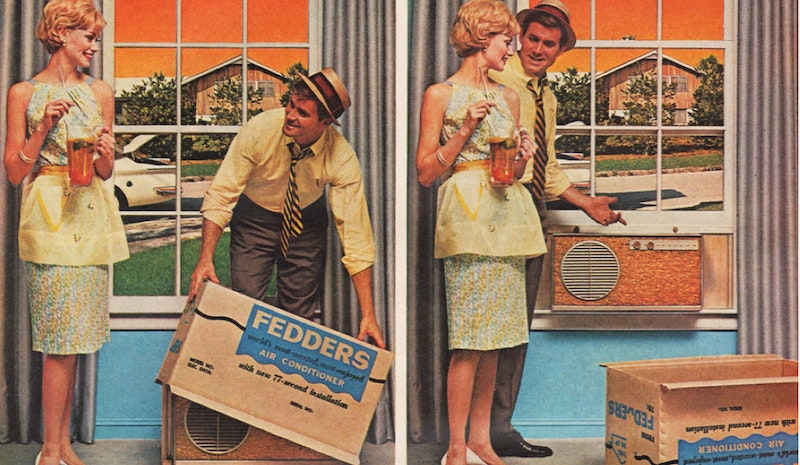 One summer day in 1995, my friend Patty Calhoun (editor of Denver’s weekly Westword) was visiting Manhattan and stopped by with a friend to catch up with me at the New York Press offices in Soho. It was very hot outside, and the air conditioning was at full blast in our ninth floor space at the Puck Building, but my own office was toasty as I’d closed the AC vents. Later, while drinking margaritas at El Teddy’s in Tribeca, Patty let out a guffaw, and said that her friend asked, “Is Russ a junkie?” That seemed daft, although my attire might’ve given that impression: a suit and dress shirt buttoned to the top, and tie perfectly knotted. Colleagues would not-so-subtly suggest that we hold meetings anywhere but my office since the temperature was too high. I rarely break a sweat.

It’s a hobbyhorse, but I can’t stand cold weather—meaning anything less than 60 degrees, and even that’s a stretch—and look forward to the summer months to thaw out after a typical Northeast winter. This week both The New York Times and Washington Post ran similar stories—the Post’s was superior—about air conditioning and how office temperatures are set to accommodate men, based on a decades-old model that was gauged to the “40-year-old-man weighing about 154 pounds.” That’s about my weight, although I’m 20 years older, and I’m sure glad not to work in a conventional office. In fact, right now, in our no-AC Splice Today office, my son Nicky has a fan running, and it’s getting a little chilly. I use a space heater from October until May.

I’m no position to dispute the findings in Nature Climate Change, which claimed that women, for a variety of reasons—slower metabolism, more body fat, wardrobe—are frost-bitten in the workplace while men are perfectly comfortable. Anecdotally, however, I’ve never found that to be the case. For example, my wife and I go through a year-round routine, one of the necessary compromises of marriage: she likes it chilly, so turns on the central air first thing in the morning after May 1; in winter months, I fiddle with the heat. Our two sons diverge on the temperature question: my older son is more like me, uncomfortable in the cold (though not as extreme as me, but he’s just 22); the younger boy might, in the future, be one of those 80-year-old guys who goes for a dip in the ocean when it’s 10 degrees outside. My mom and dad both disliked the heat, and while courting in the late-1930s often went to Coney Island to cool off. I can’t remember when the first AC unit was purchased for our drafty house, but it certainly wasn’t before 1965. My four brothers were split: my oldest is like me, and wears a sweater if it’s below 75 degrees.

Anyway, here’s what puts a turd in my pocket. Although by no means an activist, like most realists, I believe climate change threatens the planet. Why GOP presidential candidates even make a stink over this—climate skeptics like Rick Santorum, who’s just the most egregious—is beyond me, since it’s a losing issue. Move on. So you’d think there’d be a hug and cry over the arctic air in movie theaters, restaurants, grocery stores and large retail outlets from those who do actively engage on the merits of conservation. I feel like a freak going to a film in the summer: long pants, socks and a heavy sweater, just because it’s so damn cold. And it’s worse in the winter, when, inexplicably, the AC still roars. Where’s the outrage? And why do skyscrapers have most of the thousands of lights on during the night when the only occupants are security guards? Not a peep from the climate change crowd (some of whom are more apocalyptic than others, claiming that we’ll all be washed away by a flood in the next 10 years).

There’s a level of hypocrisy here that reminds me of Hollywood celebrities speaking out about income inequality at press conferences and political rallies, and then traveling in a private plane to one of their five residences. In any case, since “major” medical studies are released, it seems, as often as The Huffington Post defiles the onetime craft of journalism, I imagine that the conclusion of one of report’s authors, that buildings should “reduce gender-discriminating bias in thermal comfort” will go unheeded. And I’ll remain a human icicle for most of the year.