This Isn't My Kingpin

Everyone else likes the guy in Daredevil. I don't. 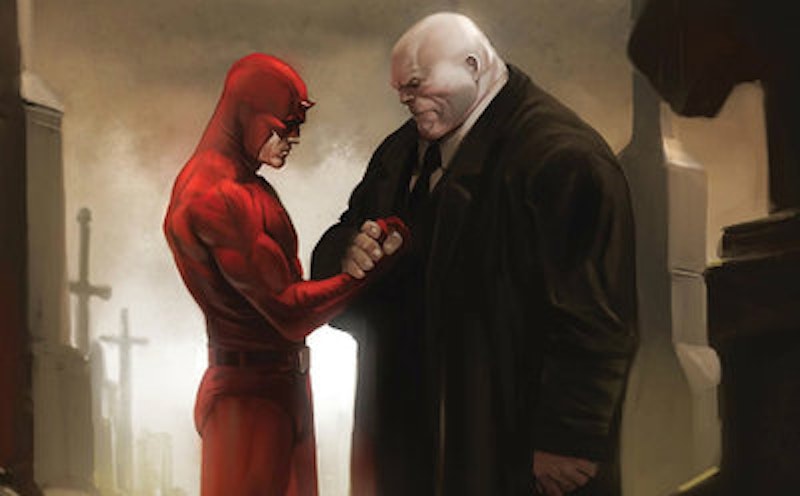 You may not have heard about the Kingpin. He fought Spider-Man in comics from the 1960s, and later on he moved over to fighting Daredevil. Now that there's a Daredevil series on Netflix, people may think of the Kingpin as Vincent D'Onofrio, the talented actor who portrays him on the show. In fact people who already know the Kingpin may agree; there's at least one comics scholar of my acquaintance who feels that the D'Onofrio version is spot-on. I'm baffled.

My first objection is this: D'Onofrio looks like a human, whereas the comic version looks human-plus. The real Kingpin isn't just a husky fellow with a gut. People don't have shoulders that far apart or that high up; a human's chest and stomach don't look like a Volvo that has turned vertical and jammed itself to a tree. We have our share of bald heads, but they are smaller than a medium-size beach ball, and some neck shows up between the baldy's scalp and his shoulders. Kingpin isn't as strong as the Hulk, I have to stipulate that, but he stands much the same way and takes up the same room. A human can't fill that space. You need a big man plus CGI, or whatever the effects people can work up. Maybe a body-builder with a fat suit that doesn't look like a joke, and then touches of CGI atop that. Maybe this is impossible and nothing would look right. In the meantime we have an actor all by himself, and that's not an adequate substitute.

To get fancy, the Kingpin grew straight out of comics and doesn't transplant easily. You'd think he would, since he doesn't have a skintight costume or strange epaulets. But the man who invented his look, John Romita Sr., took its elements from old newspaper cartoons about plutocrats; hence the original Kingpin carried a walking stick and had a diamond pin in his cravat. He defied reality right from first glance (a diamond pin!), so it wasn't such a shock when his blob outline turned out to be muscle and not fat. Romita drew a page of the Kingpin stripped to the waist, beating hell out of flunkies to pass the time. The gang boss didn't have the V contour of the normally fit man; he looked like a collection of boulders, with the biggest right above the waistline. But he beat those flunkies good. When he and Spider-Man fought, it was as physical peers, and Spider-Man is 15 times stronger than a standard human. “He's swinging me around like a rag doll!” Spider-Man thought. “His hands are like living vises!”

My second objection: the Kingpin on Netflix is written and played as a weakling. It's not that the old Kingpin has his personality fleshed out and acquires some extra dimension. The new personality is a complete swap; it comes from right field. All right, maybe the comics Kingpin has undergone more changes than I realized. Maybe he's spent months lying in bed, wondering why he went to Haverford. That would explain the TV version, a tremulous fellow who gets shown up and talked back to by everyone in sight. He can sweat away and learn difficult skills; they don't do him any good. Madame Gao laughs at him because she knows he speaks Chinese and Japanese. Poor dope thought it was a secret. His only release is to let the anger pop out of him the way it did when he was a poor little fat boy sneaking up on his dad. In between these spasms, he bites his lip.

I don't see how a TV show, or anything, can work with a villain like that. But people love Daredevil. Far be it from me. For the Kingpin's origin, they put “Brown Sugar” on the soundtrack as kids play stickball, because that song was new back when the Kingpin was a kid. To go from the street to inside, “Brown Sugar” plays on the radio in the apartment where the future Kingpin lives with his mom and dad. Dad goes boogying around to it. But the dialogue has to proceed, so mom tells him to turn down the music. He does as she tells him, and now the scene proper can begin. Odd that the big thing about this character is that he's a touchy, obstinate prick. Of course, he might have refused and threatened to hit her, but then we couldn't get to the exposition about his political campaign. Accordingly, all he says is “Your mother doesn't like music,” and the show then pumps up this remark as a major offense: mom glares, stricken. It's hype, but without the jiggering about they couldn't have the “Brown Sugar” segue.

The above epitomizes my reaction to Daredevil. It all seems pasted together. Pro talent has given the show quite a gloss, and I don't deny that the hallway fight scene in episode two was admirable. But the program is just one standard element after the other: Russians in tracksuits, the lowering walls of warehouses, wintry backlighting that apparently gives the actors a sick headache and makes their footsteps reverberate. Dialogue: “They had to sponge him off the sidewalk” and “We good?” “Yeah. Yeah, we good” and “You know who needs me, Karen? My wife. She needs me.” Oh boy.

As the clichés slog past, they remind us how much sullen pomp a TV crime show can bring to its proceedings. Those cathedral-like moments of silence as two actors flex their nostrils! By contrast, there's Hawkeye: My Life as a Weapon, a set of comic books written by Matt Fraction. A street-level hero of Daredevil's sort, Hawkeye battles against his own track-suited Russians and Marvel crime bosses. But the comics proceed by means of sure, small effects that do their work whether the reader notices them or not. Words and pictures synch, balloons and panels fall into patterns, pages build to a point. There are plenty of fights and explosions, but they aren't advertised by giant sound effects. It's a relief for me after a couple of hours of Daredevil gonging inside my head. People make a fuss over that show, and they sit still for that mopey lump who's meant to be a villain. Like the Kingpin, I can only bite my lip and wonder why.