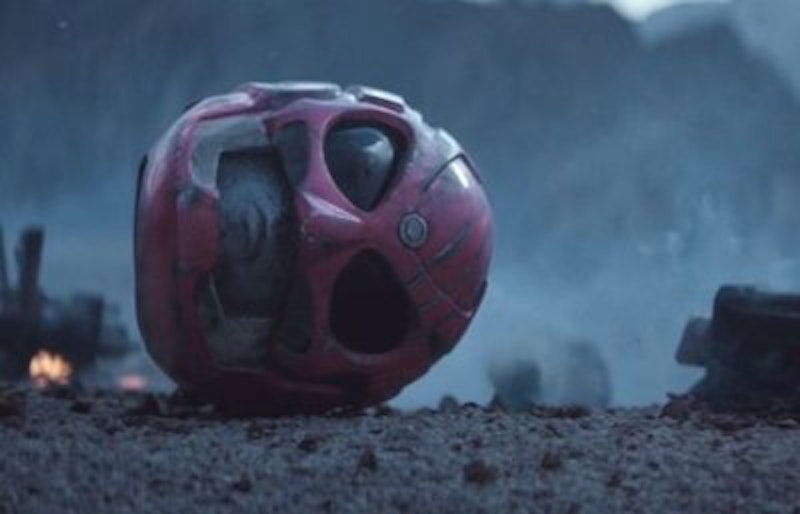 A few weeks ago one of the periodic controversies that roil around the online world erupted when Saban Capital Group ordered a film pulled from Vimeo. The video, Power/Rangers, was a fan-made short that depicted the Mighty Morphing Power Rangers as adults in a bleak sci-fi world. Filled with signifiers of the “mature,” like blood splatters and drug use, it was clearly aimed at adult fans—and Saban, the copyright holders, were not pleased. But the film had already become a minor sensation by the time it was yanked.

After Saban had Power/Rangers pulled from Vimeo, producer Avi Shankar posted the film to YouTube. Saban yanked it from there also, but a day later a compromise was reached in which a disclaimer was inserted at the start of the film stating that what followed was an independent production not affiliated with Saban. The video was put back up, and Power Rangers fans resumed losing their minds over the thing.

Power/Rangers is a curiosity, an unofficial story told professionally. It’s not aiming to make anybody any money, but has relatively high production values and stars professional actors (Katee Sackhoff and James Van Der Beek). It’s what you get when a fan film is made by pros, an unexpected evolution in the relationship between corporate intellectual property and the drive to artistic creation—a desire to play with some old action figures, with a new sense of cool and an experienced storyteller’s knack for form.

Running just under 15 minutes, it’s framed around an interrogation: in a future where Earth has negotiated a truce with the evil Machine Empire and gained various strange technologies, a former Power Ranger named Rocky imprisons and questions his erstwhile comrade Kimberly about another former Ranger, Tommy Oliver. This gives writer/director Joseph Kahn excuses for flashbacks showing the bad ends that have come to other Rangers, as well as setting up a final fight scene and a twist cliffhanger ending.

In an interview with Drew McWeeny at HitFix Kahn said that he “didn't even know anything about the Power Rangers” when he agreed to make the film. Power/Rangers was an attempt to do something “dark and gritty… with essentially a really incredibly silly property.” As Kahn told McWeeny, “The joke isn't that you're laughing at each particular scene; the joke is that we did this 'fuck you' thing in the first place. You're going to look at it and you go wow I can't believe they fucking did that.”

It’s a noble attempt, for certain values of “noble,” but it fails. While Kahn told McWeeny he wanted to make “the version [of Power Rangers] that Hollywood could never ever make,” the film feels like a slick mainstream production. One aiming at a hard-R rating, yes, but fundamentally a story built out of Hollywood clichés, down to the bewildering importance of a generic white guy as the hero. It’s unauthorized, but never surprising. You can see why fans were fascinated: there’s a veneer of adulthood, but the core of it is wish-fulfilment. It uses childhood fantasy-figures to express adult dreams.

That said, it’s true that the film annoyed Saban, who have other visions for the Power Rangers characters—which include a feature film currently scheduled for 2017. The team behind Power/Rangers aren’t likely to have won much favor with Saban from their efforts, and Shankar claims his film was never meant as a pitch anyway. Still, it clearly took resources and some amount of money to make. Why do it?

For fun. It’s probably fair to say that Shankar, who had the original concept for Power/Rangers, knows his way around the film industry. Born in 1985, his first credit as producer came on the 2010 movie Main Street; he’s produced or executive produced nine features since then. I’ve seen two of them. One was The Grey, which was well-shot, ambitious, and dumb. The other was the 2012 film Dredd, an adaptation of the long-running British comic character Judge Dredd. Dredd’s an exceptionally well-done action movie, using special effects judiciously to create the sense of a larger world than we’re ever actually shown, while the set-pieces are inventive, well-crafted, and memorably violent.

But that’s not Shankar’s only work with the Judge Dredd character. He also made a six-part animated series, released last year but not set in the movie’s continuity, called Judge Dredd: Superfiend. It’s a fan film based on a property he’d already done an official version of. And it wasn’t his first fan project, either. In 2012 he released a short film based on the Punisher, a character owned by Marvel Comics, then in 2013 put out another short based on another Marvel character, Venom. The Punisher film starred Thomas Jane, who also starred as the same character in an official Punisher film in 2004. Again, the amateur and the official blur.

Shankar told Collider.com, “I have a burning desire to entertain and different mediums allow me to do this in different ways… it’s for the fans.” He also said in a Reddit Ask Me Anything thread two years ago that the Punisher film “was a big fuck you to the system and I like telling the system to go fuck itself.” It’s similar to Kahn’s take on Power/Rangers, but not quite the same: Kahn’s extending a middle finger to the whole idea of the franchise, while Shankar’s giving the finger to the movie-making system but hoping to show fans a good time.

The AMA’s an interesting look at Shankar’s thinking in general. He observed, “Because of how the industry is changing small things like YouTube hits can be monumental for your career.” Similarly, asked about how to get into the industry, his advice was: “Use the Internet. Agents & managers troll the Internet all day looking for new voices to sign. It sounds crazy but it's true.” Shankar was and is an established professional; he doesn’t need to do fan films to make his career. But he’s saying that what he did is a viable way for up-and-comers to make their name.

Asked how the movie industry will change in future, he suggested that “Theatrical movies will become almost exclusively franchise, brand, and thereby commerce driven.” He also said that already “copyright is the lynchpin that drives the movie business. Movie studios have value only because they control film libraries and they control these libraries because they control the copyright to the films.” Hard to argue with him, as the North American box office is increasingly dominated by corporate-owned intellectual property. Other media, even comics, aren’t driven by corporate copyrights in the same way. So if aspiring pros want to show what they can do with corporate characters, fan films may be a logical step. Shankar seems to be implying that the next generation of filmmaking talent, or at least mainstream filmmaking talent, will come out of that kind of fan work.

He may already be right. In 2007 director Josh Trank, then 23, made a short film called Stabbing At Leia’s 22nd Birthday, which uses Star Wars imagery in a surreal way. Trank went on to make the 2012 film Chronicle as well as Sony’s soon-to-be-released Fantastic Four. He was also hired by Disney to direct a Star Wars spinoff before recently walking away from the project.

Of course, most fan films have the feel of amateur productions. But not all of them. Something like Doctor Puppet, a Doctor Who fan project telling stories of the Who cast in puppet form, is quite lovely—and the animator behind it, Alisa Stern, has actually worked with the show producers on a BBC documentary about the official show. Sandy Corolla, a veteran designer and art director for Hollywood films, made two short Batman films in 2003 and 2004, Dead End and World’s Finest, which drew praise from geek sources like Kevin Smith and Ain’t It Cool News; Corolla went on to direct a feature film of his own, 2010's Hunter Prey.

Even with a professional level of talent behind them, you might think that fan films are different from fan creations in other media because of the cost. But Shankar’s said that his unauthorized “bootleg universe” films were made for very little money, with lots of people volunteering their time and effort. It’s quite possible for a well-done fan film to look like a professional production. Which raises questions about where the line is. If Jack Kirby and Stan Lee created The Fantastic Four, but Sony holds the film rights and commissions Josh Trank to make a movie based on their work, what makes Trank’s movie not a fan film, other than the layers of corporate bureaucracy he had to negotiate? Had Trank gone on to direct that official Star Wars film, what would be the real difference between that and Stabbing at Leia’s?

I’d guess most corporations aren’t interested in the philosophical parsing of “fan” and “pro.” Most of them have accepted the existence of fan-created works, whether in prose or comics or film or other media, so long as nobody’s making any money off them. They’ve decided to risk the dilution of their brands in exchange for a base of fans that are more involved with the work—fans who’re effectively creating free PR for copyright owners. A generation raised on widespread fan fiction turns out to be comfortable doing unauthorized work to fulfill their own artistic desires. It’s potentially an interesting balance: if you have a background in film and know how the medium works, you can make your own short piece featuring corporate characters as a way to show your love for those characters, and perhaps experiment with an approach an “official” story will never use. And, maybe, the final product becomes your way in to other career opportunities.

What’s it all add up to? Shankar told the Pittsburgh Tribune-Review that fan films are a kind of street art. He’s clearly invested in the form. The week after Power/Rangers went live, he put up what he called a “pre-visualization motion storyboard,” a kind of stylized animated film, called James Bond: In Service of Nothing.