The Youthtopia of "Dial H for Hero"

DC's feature comic was a crucial and innovative contribution to the youth market and counterculture. 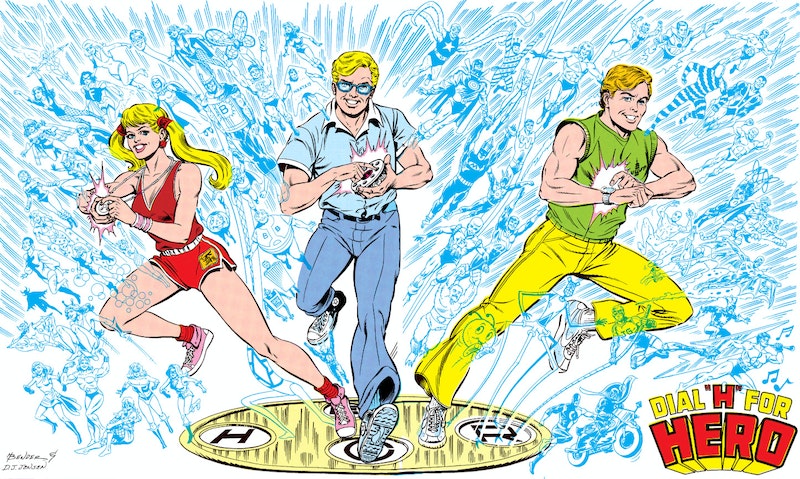 DC Comics’ feature “Dial H For Hero” started as the mythic tale of a kid who escapes the insecurities of childhood with help from an enchanted word. The series began in House Of Mystery no. 156 (January 1966). It presented the adventures of teenager Robby Reed who stumbles across a magic device similar to a rotary telephone dialer. Reed instantly develops a psychic link to the artifact via some unknown supernatural lifeform that instructs him to dial H-E-R-O whenever he gets in trouble. When trouble inevitably arrives, each time he dials he becomes a different super hero.

To paraphrase Don Markstein’s Toonapedia, “Dial H” chewed up super hero concepts like popcorn. Even though the series presented a breezy eccentric take on genre tropes, steady continuity and character development never came together. It tanked after less than 20 issues with House Of Mystery 173 containing the series’ final 1960s appearance.

In February 1981, “Dial H For Hero” returned as a bonus feature in a double-sized issue of DC’s Legion Of Super Heroes (vol. 2, no. 272). The next month it was given star billing in Adventure Comics. Adventure 479 kicked off the new version’s 12-issue run; soon after it became a back-up series in 22 issues of The New Adventures Of Superboy. Other than the presence of the Dialer and an ever-changing super hero cast, the newer version differed significantly from the original. The revamped “Dial H For Hero” stood on its own as a powerful reflection of 1980s youth culture and the socio-economic impact of fandom.

What set this series apart from its first run was an experimental collaboration which found writer Marv Wolfman (New Teen Titans, Vigilante) and illustrator Carmine Infantino (The Flash, New Adventures Of Supergirl) spinning tales that showcased super heroes, super villains, fashion designs, and even furniture designs that were all created by fans. DC randomly solicited these submissions within the pages of their early-80s titles and would-be creators sent in written descriptions and sketches of their ideas by mail. Contributors whose ideas made it to press were compensated with a brightly colored “I Dialed H for Hero” t-shirt and printed credits.

This odd pro/fan team-up was partially inspired by the fan collaborations of Archie Comics’ series Katy Keene, a perennial teen comic favorite that began in 1945. DC figured that if fan-generated material could maintain such longevity in teen genre then it’d be an even bigger success within the cash cow super hero market.

At the same time similarly innovative concepts defined the content produced for independent publishers and small press comics. These companies and titles were often helmed by amateurs and fanzine veterans. Their efforts were gaining extra attention as a result of the new direct market system of comic distribution. This bypassed conventional retail outlets (newsstands, convenience stores, department stores, book shops, etc.) and focused on catering to the niche clientele of comic book stores and hobby shops. Direct distribution was then still an unusual concept, but it was catching on and innovative DC publisher Jenette Kahn couldn’t deny its potential. In the early-70’s Kahn had already become a trail blazer by publishing and editing Kids, a nationally distributed periodical that was one of the first to be comprised entirely of material made by children. Her respect for inexperienced creators formed the heart of the revived “Dial H” series.

Though Adventure Comics and The New Adventures Of Superboy were always distributed through both conventional and direct channels, the “Dial H” stories were heavily influenced by young adults, teens, and children, the age demographic that formed niche fandom’s majority during the 1980s. When they weren’t busy fighting super villains, the series’ main characters Vicky Grant and Chris King were teenage high school students who lived with their parents. Many supporting characters were also teens and children. Just like Robby Reed before them, youthful curiosity leads Vicky and Chris to stumble upon their own magic Hero Dialers in a mysterious/surprising corner of their hometown. The pair developed a tempestuous, awkward romance and most of their super hero exploits were shared.

Ubiquitous youth culture touchstones like video games, the punk movement, feminism, shopping malls, fast food, divorced parents, juvenile delinquency, rock concerts, and even comic book stores were constantly referenced. Adults were often presented negatively, mostly for being evil super villains, but sometimes due to the flagrant disrespect they held for the kids’ privacy. This recurring plot point flared up on school nights, a time when Vicky and Chris were forced to sneak out of their homes when the urge to dial H-E-R-O called.

The Hero Dial was the title’s most important link to youth culture. Even before the utilitarian cell phone became the center of all communication, phones were sacred objects that could give a teen’s personal life freedom from adult intrusion. From the 1950s on the euphoric teenage telephone conversation has been synonymous with youth iconography. As a telephone-like device that blessed its user with empowerment, the Hero Dial became a poetic tribute to teen social mores.