Do Go On With Your Very Bad Self

On Fassbinder, Pasolini, Marco Ferreri, Adam Curtis, and the limits of “counterculture” that operates within the system it criticizes. 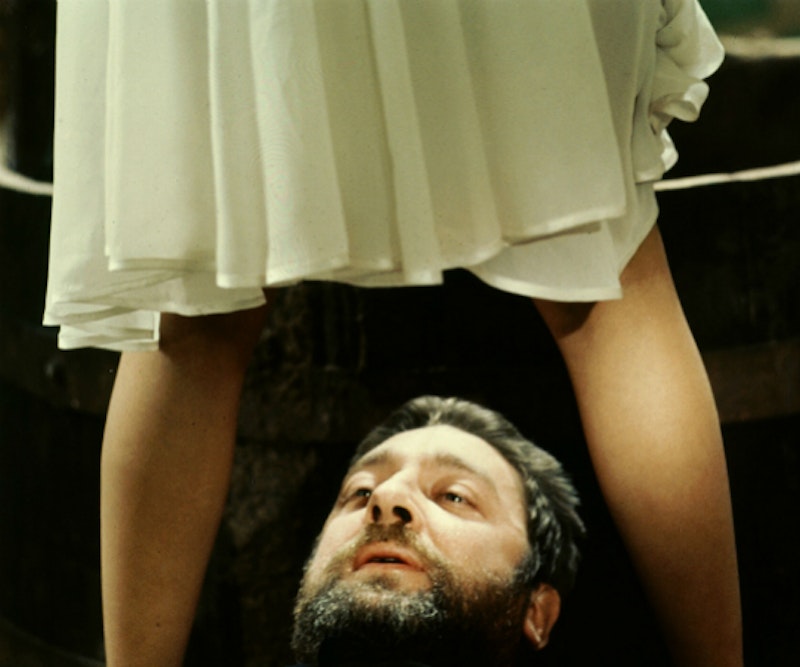 It’s hard to imagine a contemporary filmmaker making something as unapologetically insane as Rainer Werner Fassbinder’s Satan’s Brew, made 45 years ago and—I’d also imagine—offensive and intolerable to watch for a lot of people who’d otherwise advertise themselves as “radical,” whether it’s sex or politics. Fassbinder rented a restaurant and threw a party sometime around the production of Satan’s Brew. Irm Hermann, who was not in the film but invited regardless, became the “main character” of the night when Fassbinder, fuming over her new New Age-y vegetarian boyfriend (who she met during Fassbinder’s production of Zola’s Germinal the year before), said that he would only acknowledge Hermann if she ate a steak in front of the entire party:

“After she had started to follow an Indian guru, and had turned vegetarian, she ordered a salad for her main course when she was one of his guests at a large dinner party in a Frankfurt restaurant. He caught her eye, winked at the others and said: ‘Irm, for each steak I see you eat, you get one fuck.’ The laughter did not make her blush; meekly she signaled to the waiter and ordered a steak. But she had eaten no meat for a long time, and though she struggled bravely to overcome her revulsion, she had to rush out with her hand clapped to her mouth. When she emerged from the lavatory, she sat down proudly beside Fassbinder, trying to look into his eyes. He made sure that he had the attention of his audience. ‘I said eat it, not puke it up. If you want a fuck, you’ve got to keep the meat inside you.’”

That’s from Ronald Hayman’s 1984 book Fassbinder: Filmmaker, only two years after RWF’s death and more salacious and provocative than biographies and books that would follow. Kurt Raab, longtime art director, actor, lover, and general associate of Fassbinder starred in Satan’s Brew, spilled the most juice after his director’s death. His memoir, never translated into English, is the primary source for both Hayman and Robert Katz’s books, and I have to imagine a not insignificant amount of effort has been expended by the Rainer Werner Fassbinder Foundation to keep it out of print and in German.

It’s amazing to see an artist as radical in his personal life, as well as his films, treated with such reverence today, when behavior as described above would inevitably lead to innumerable “cancellations” and weepy denunciations today. Can you imagine Noah Baumbach making Greta Gerwig eat bleu cheese in Park Slope? This isn’t an endorsement of Fassbinder’s treatment of Hermann, who was less of a willing sub than someone in love taking all she could get, but I’m not denouncing it, because it doesn’t matter. The story is relevant in its direct connection to the work produced around the time—Satan’s Brew and Chinese Roulette—where psychological warfare and “savagery” are of primary concern. Fassbinder was someone who, according to Hayman, couldn’t help “supraextending” himself into whatever he was doing at the time. This wasn’t purely casual cruelty.

This is only one person’s attempt at a new way of living in the wake of the 1960s. Marco Ferreri, a neglected Italian master, made one of his best films in 1969: Dillinger is Dead is the best and most inscrutable of all the cultural gold, effluvia, and ephemera to come out of Europe in the last couple of years of the 1960s. It’s a more formally experimental film than anything Fassbinder ever did, but it’s also more lighthearted, “realist,” and playful.

Still, Ferreri was far more cynical about the cinema’s possibility for any kind of social change or impact. Interviewed in 1969, he said, “In the case of Dillinger, I asked the distributors to release it as quickly as possible after the premieres, in small theaters—the ones that already work a bit like a pre-art house network. But it doesn’t matter so much. On the contrary, what exactly would be shown in this counter circuit? Films meant to educate the public in the same old paternalistic way?… This counter circuit you mention is, after all, only another fruit of the same system. Soon enough, this counter circuit will become very fashionable; theater owners will notice that it is a profitable business and they’ll jump on it… A counter circuit certainly promotes a change of scene, and it does hold out the possibility of seeing something decent. But let’s not fool ourselves. This counter circuit is entirely integrated with the main one. There is nothing to do about that.”

Adam Curtis recently reemerged with another mammoth media collage, Can’t Get You Out of My Head, named after Kylie Minogue’s excellent and omnipresent (at the time) 2002 single. His interview on Red Scare with Anna Khachiyan and Dasha Nekrasova had some striking lines, particularly his referring to the past four years in America as an “hysterical but frozen society,” where nothing fundamentally changed, but millions of people acted like the sky was falling every day. There was no wall, there were no mass deportations, there were no abortion clinic bombings or obscene “moral majority” crusades—there wasn’t even any real dirt! The juiciest material in the Trump era came before the election, with the Access Hollywood tape. Nothing topped “grab ‘em by the pussy.”

Nonetheless, Curtis may be a talented media artist, and I agree with his opinion that tech algorithms aren’t as smart as we’ve been led to believe, but in the Red Scare interview he shows himself to be a political neophyte and an optimistic weenie when he preens about Joe Biden halting the sale of weapons to Yemen (which he quickly resumed). Curtis sounded like he was begging when he tried to drive Khachiyan and Nekrasova out of skeptical silence: “I mean, that’s good, right? That’s good. I wish my country were doing that.”

He reiterates that he’s a journalist, and he remains publicly neutral politically. Bullshit. This guy is touted as one of the premiere media artists of our era, a “prognosticator” who predicted Trump’s election in 2016’s Hypernormalisation, but how useful can his work be if it’s made by a man with no significant political consciousness or awareness? He’s a “reporter,” yes, in other words, part of the system he’s criticizing. The BBC gets to hold him up and say they have a rebel, when what they really have is a bird in a gilded cage, who, by the sound of it, doesn’t mind his status as the house lecturer and court jester, a figure who can only be “transgressive” within certain boundaries, known to all of us, boundaries that make life exceedingly boring with each passing year.

Pier Paolo Pasolini’s Salò, or the 120 Days of Sodom has always been more well known as an example of “extreme cinema” whose images are as instantly recognizable and similarly resonant as, say, Goatse or Lemon Party. Then again, maybe I’m dating myself. Besides, there’s nothing as anatomically extreme as Goatse in Pasolini’s grand masterpiece, whose most graphic moments and images all involve shit. This isn’t what makes Salò hard to watch or a supreme work of art—it’s in Pasolini’s inspired superimposition of three separate historical periods of debauchery and cruelty, from the 18th-century dungeons of the Marquis de Sade, to the waning days of Mussolini’s Italy, to the disastrous failure of the counterculture to resolve, improve upon, or even maintain interpersonal relationships after “free love.”

Pasolini cast contemporary Italian teenagers as his Fascists’ victims, and it’s somewhere two-thirds of the way through, when The Duke (Paolo Bonacelli) laments how even his ecstasies will wane, “and the libertine’s illusion turns to dust,” while standing beneath one of his taken male slaves, ready to receive his ass or piss or shit. Another Artaud quote that pops up in Satan’s Brew emphasizes that “humanizing the world means feeling ourselves more and more as masters in it,” which feels more difficult than ever.

Walter Kirn made a typically keen point about the absence of “the real” in our country the other day on Twitter: “I expressed my hunger for infrastructure projects of real substance. Here’s my thinking. We have flooded the zone of inner experience with tech. Our subjective landscapes are overcrowded. But the outer, built world is crumbling, dull. This is out of whack, imbalanced, & neurotic… Things well done and formidable in scale that we can see and use and admire are worth a million exhortations to come together and ten millions scoldings for failing to.”

Living in the world and feeling ourselves as masters in it does not necessarily have to come from Artaud or Fassbinder or Ferreri or Pasolini, four intensely personal artists who supra extended and projected themselves into everything they did, necessarily “responding to the moment.” We don’t need more didactic, “paternalistic,” soulless cultural product that espouses the “right” values without ever taking risks, much less seeking out to be transgressive. Art should be allowed to be “a dangerous game” that consenting adults are willing to participate in, and I’m not talking about beatings or bawlings meant to “inspire” performances from insecure actors. The people that participated in Salò, Ferreri’s La Grande Bouffe, or practically any of Fassbinder’s films were taking more of a “professional risk” today then they were then. That’s frightening.

Frederick Wiseman, probably the greatest documentary filmmaker who has ever lived, told a deflated Film Comment interviewer in 2012, “I don’t think there’s any measurable relationship between film and social change, particularly in a democratic society where so much information is available… I hope I made a good movie. Don’t ask me what that it is, because it’s completely subjective… The only standard is my own, and it’s hard to enough to know what I think.” A film can’t put food in anyone’s mouth other than the few who worked on it and perhaps profited off of its sales. Raising the minimum wage to $15 an hour would have measurable social change.

Wiseman may be right that films can’t “change the world” in the same way the dull legislative processes he’s documented several times can, but films still have an observable effect on our reality. Besides nearly every living human being influenced by movies or movie codes or signs, there’s still an occasional film like Joker that forces cops to guard theaters. Parasite is a perfect example of the cinema that Ferreri was referring to: a critique of capitalism completely absorbed into its principal institutions in the West. Bong Joon-ho winning so many Oscars last year may lead to more foreign language films being recognized by the Academy, but it won’t have any measurable social or political effect.

And I liked Parasite—I just can’t think of a similarly praised film that was any more pointed or transgressive, because while it may have been entertaining and well made, Bong’s film wasn’t a serious challenge to capitalism, and maybe I shouldn’t expect such “provocative” challenges from the cinema. But unlike Wiseman, I’m not 91, and haven’t been disabused of the notion that you can shock people, even if only a relatively small group, into or out of ways of living that are killing themselves and the people around them. Films can’t fix the world, but they make individual lives so much richer, and it follows, their world. We can’t continue to accept so many false visions, whether of the past, present, or future.