On the hyper-real breakup of Erika and Tom Girardi. 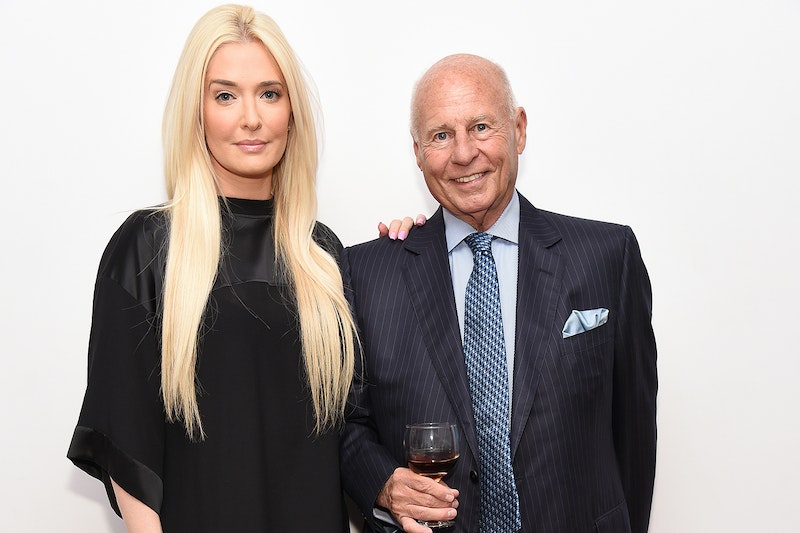 When one of the Real Housewives announces a divorce, fans usually see it coming from a mile away. Tamra in Orange County, Ramona in New York City, Teresa in New Jersey; these major breakups all punctuated a substantial stretch of on-screen acrimony and tabloid rumors, and by the time the divorce complaint was filed it was only a matter of acceding to the inevitable.

Not so with Erika Girardi of Beverly Hills, who filed to divorce her high-powered lawyer husband Tom Girardi late last year. Though the filing occurred amid a flurry of grim legal and financial difficulties for Tom and his law firm, the split was baffling from an emotional or narrative perspective.

But what was so odd about Erika’s sudden divorce was that she and Tom had never been depicted as anything but solid. The most salacious thing they ever offered was their age difference—Erika is a vibrant 49 and Tom seems relatively feeble at 81—but even that felt like low stakes. The other ladies would try digging for drama, sensing that something was there, and Erika wouldn’t flinch. She’d be more likely moved to tears, reflecting rather sweetly on her love for Tom, what he’s done for her, and how much he means to her.

Tom was always depicted as stately, generous, avuncular; a calming and encouraging presence, masculinity in its softest twilight. The nature of his relationship with Erika was unconventional but always read as sub-scandalous and un-cynical. One gathered this was a sugar relationship that somewhere gave way to a stronger and more meaningful form of interdependence, with each half of the relationship coming to offer a matchless form of support to the other.

So where did the divorce come from? The commonplace and simplistic interpretation would be to write off the relationship as just another sham marriage: an act, a lie, a caprice of the reality-distorting machinations of modern media, hyper-materialism, and ruthless narcissism.

But a more interesting explanation came a month after the divorce announcement, in a separate complaint filed by a law firm holding one of Tom’s major debts. According to the complaint’s allegations, Tom and Erika were actually not party to a sham marriage, but precisely the opposite: they were orchestrating a sham divorce. The theory of the case, in a basic sense, was that by filing for divorce and because the couple didn’t have a prenuptial agreement, Erika would be entitled to retain money and assets that Tom otherwise would’ve had to fork over to creditors.

Here the saga comes into focus. Whereas ostentatious couple-posting on social media and gamified dating have trained us to expect an underlying fraudulence to marital cohesion, Tom and Erika were clever enough to turn that concept on its head. Instead, they’d put on a fake breakup.

This knot of double and triple negatives—a sugar arrangement successfully simulating a loving marriage now in the throes of a fake divorce—gets at the essence of reality television and what it says about identity, narrative, and power in the hyper-real era.

Key to understanding the dissimulated breakup of this simulated marriage is the fact that both are better known by their fictional alter-egos than their “real” selves. Even before Real Housewives, both Erika and Tom built their careers and identities on fictional representations of themselves.

While she plays herself on television, Erika’s role in that performance entails the conjuration of a pop-star alter-ego: Erika Jayne, an entertainment persona of almost supernatural vapidity. As Erika Jayne, it’s not only that she “becomes someone else” on stage and in her music videos, but further that this “someone else” is already only the flimsiest simulacrum of what an empowered female pop star should be. Many successful and engaging pop figures lack talent; what Erika Jayne lacks is subject-hood.

Like Erika, Tom Girardi also built his career on a thin fictionalization of himself. As explained in a recent Los Angeles Times profile on the couple, it wasn’t until Steven Soderbergh’s Erin Brokovich (2000) came out that Tom became a real force in consumer litigation. Tom was one of the lawyers represented by the composite figure of Ed Masry in Soderbergh’s movie, and he could take credit for winning one of the most significant consumer lawsuits to enter the popular consciousness. With a bit more than the truth and a lot less than a lie, Tom successfully leveraged the defender-of-the-weak moral aesthetics that Soderbergh so effectively romanticized, building a robust legal empire that went on to rake in over $100 million per year.

To the extent that Tom’s filmic representation as a social-justice crusader became inseparable from his subsequent “real” success as a wealthy plaintiff’s attorney, it comes as less than a surprise to learn that his career is ending in disgrace. Today, Tom stands credibly accused of stealing settlement money from Indonesian orphans, egregiously defrauding creditors, and operating his legal practice as a Ponzi scheme that siphoned off client funds to finance his wife’s vanity pop career.

For both Tom and Erika, these layers of living fiction are further refracted in the reality television frame, blurring and destabilizing traditional concepts of identity and intention as fixed, ascertainable, continuous referents. As their tragicomic persona-craft morphed over time from biographical narrative to concrete fraud, their story presents the way that reality television denatures the traditional distinction between fiction and reality, blurring to erasure a boundary that was once considered inviolable.

—Tom Syverson is a writer living in Brooklyn. His first book, Reality Squared: On Reality TV and Left Politics, will be out April 1 from Zero Books. You can preorder it here, and he can be reached on Twitter @syvology.