Among Marvel characters, only The Hulk is embroiled in identity politics, science gone mad, and the paradox of "fighting for peace." 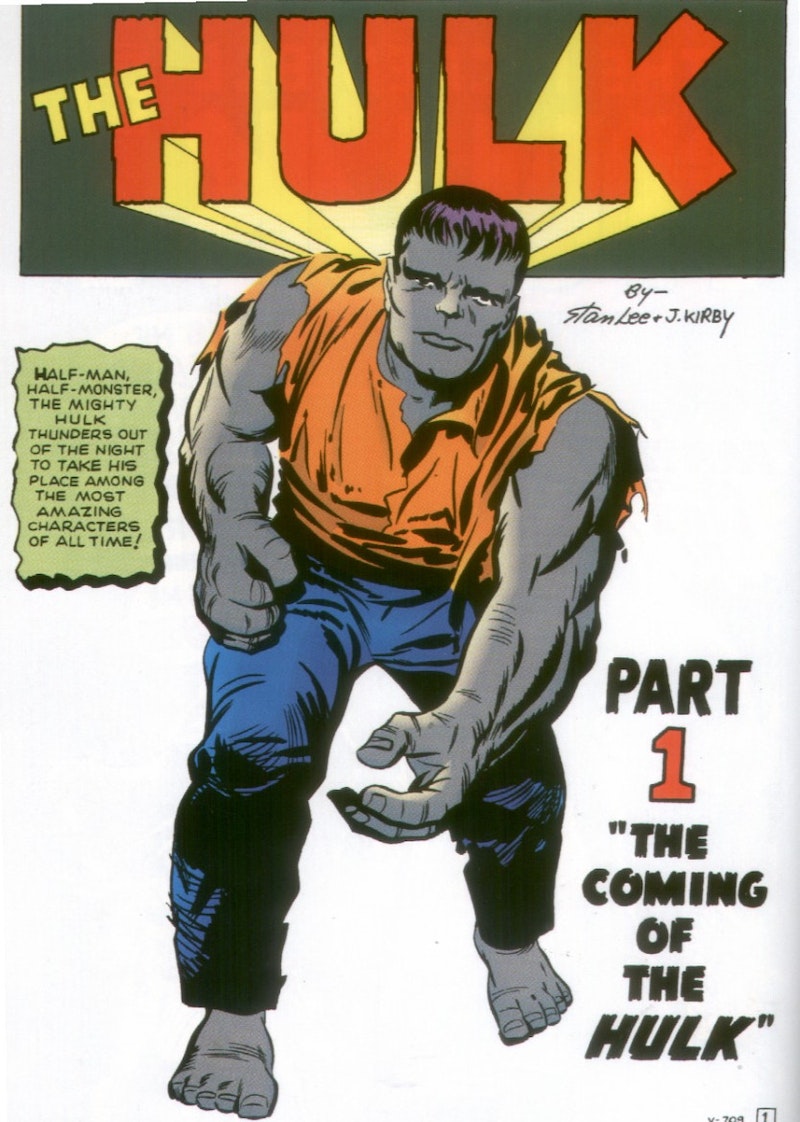 The clash of identity politics and interpersonal drama. The battle between scientific innovation and organic progress. The need to destroy war while creating world peace. There’s only one major Marvel Comics character embroiled in all of these conflicts: a green-skinned hothead, a cosmic explorer, a continent-hopping anomaly named The Hulk. Even though he debuted nearly a decade earlier, the green goliath wouldn’t become a center for all this tumult until the August 1970 publication of The Incredible Hulk no. 130. This issue featured a story titled “If I Kill You I Die,” the first Hulk tale ever to depict the sub-human hero physically separating from his alter ego, atomic scientist Dr. Bruce Banner. “If I Kill You I Die” turned the Hulk series into a symbolic narrative representing humanity’s struggle to confront its own defining imperfections.

From this story onward Bruce Banner becomes obsessed with finding a way to rid himself of The Hulk’s presence, yet he must try not to be too obsessed or stressed about it because his transformation into The Hulk is always triggered by extreme frustration, a symbolic dig at the human concept of losing composure under pressure. Banner must be the perfect model of self-control; otherwise The Hulk might randomly throw a tank into the local supermarket. Or hop 10 billion feet into the air and land in Portugal. Or maybe just crush Mount Rushmore with his bare hands.

The monster only seeks a respite from conflict though he never knows exactly why. That’s because Banner’s really the one seeking peace. The doctor’s sense of purpose, his genteel connection to civilization, is like an ember always aglow somewhere in the dark wilderness of The Hulk’s mind. When The Hulk finds peace Banner returns, bringing along all of the logical observations and emotional nuance that form an ordinary human personality. These give Banner’s life—and life throughout the Marvel Universe—a harmonic balance. As long as The Hulk exists that harmony faces the danger of being lost forever.

In The Incredible Hulk 130 the monster recovers from another rampage, leaving the doctor dazed and wandering around disheveled near the campus of his alma mater, New Mexico’s Desert State University. Banner reconnects with old friend and former classmate Professor Raoul Stoddard, one of the few scientists who’s even close to equaling Banner in atomic expertise. He begs Stoddard to help him develop a way to reverse the effects of the gamma ray experiment that created The Hulk. The professor obliges and the duo fire up a battery of high-tech computers and generators to test out a re-transformation strategy. Writer Roy Thomas and artist Herb Trimpe unleash a sequence of multi-colored psychedelic silhouettes that burn with the awesome power of the result and its fateful consequences. Thomas’ script in particular contains powerful allusions to The Hulk’s dramatic future:

“…The tortured voice of Bruce Banner is silenced… only the steady relentless humming of the gammatron is heard… Radiation… in doses which would destroy an ordinary man… pulses thru his agonized body—until he sinks to the floor—! Then an anguished head turns—two eyes behold a great grotesque shape outlined by the searing gamma rays… (Banner) gasps …’That form – that hideous emptiness…!!’ ”

Those final words are the clinchers: “That form –that hideous emptiness…!!“ A mountain of uncertainty becomes an invisible tumor grafted onto the side of the presumably dead Hulk’s menacing outline. As the story progresses we soon learn that The Hulk has split from Banner, but he’s still alive, madder than ever, and hellbent on destroying his alter ego. The empty shell of The Hulk’s shadow reflects the emptiness he feels inside without Banner’s intellect as an element of his consciousness. How can he find peace when Banner has torn out the one part of his mind that’s ever known peace? For The Hulk this is an assault that inflicts only mental agony. Banner’s old problems are replaced by new ones. How will he get The Hulk back under control? Will he have to reunite his body and soul with The Hulk in order to do that? Why is he terrified by the idea of killing the emerald giant?

These tensions ushered in a new era for the iconic characters. Both lug around the emotional baggage of the past. Reconciling this can drive even the most level head up the wall and into their own personal smash-a-thon. This reconciliation is something that keeps us humble, unable to pass irreversible judgment on our fellow human beings. Imperfections define us as fluid shapes in the ever-growing puzzle of existence. They shield us from the threat of mental atrophy. We all have a Hulk inside that defines an imperfect part of who we are. Just like Dr. Bruce Banner we can never destroy this strange presence for there’s always a time in our lives when we must confront it.